Fishers in southern Indonesia have developed freediving skills similar to those of the Bajau nomads LISA COLLINS had encountered previously in the north-west. On a liveaboard stopover she found her dives unexpectedly entertaining 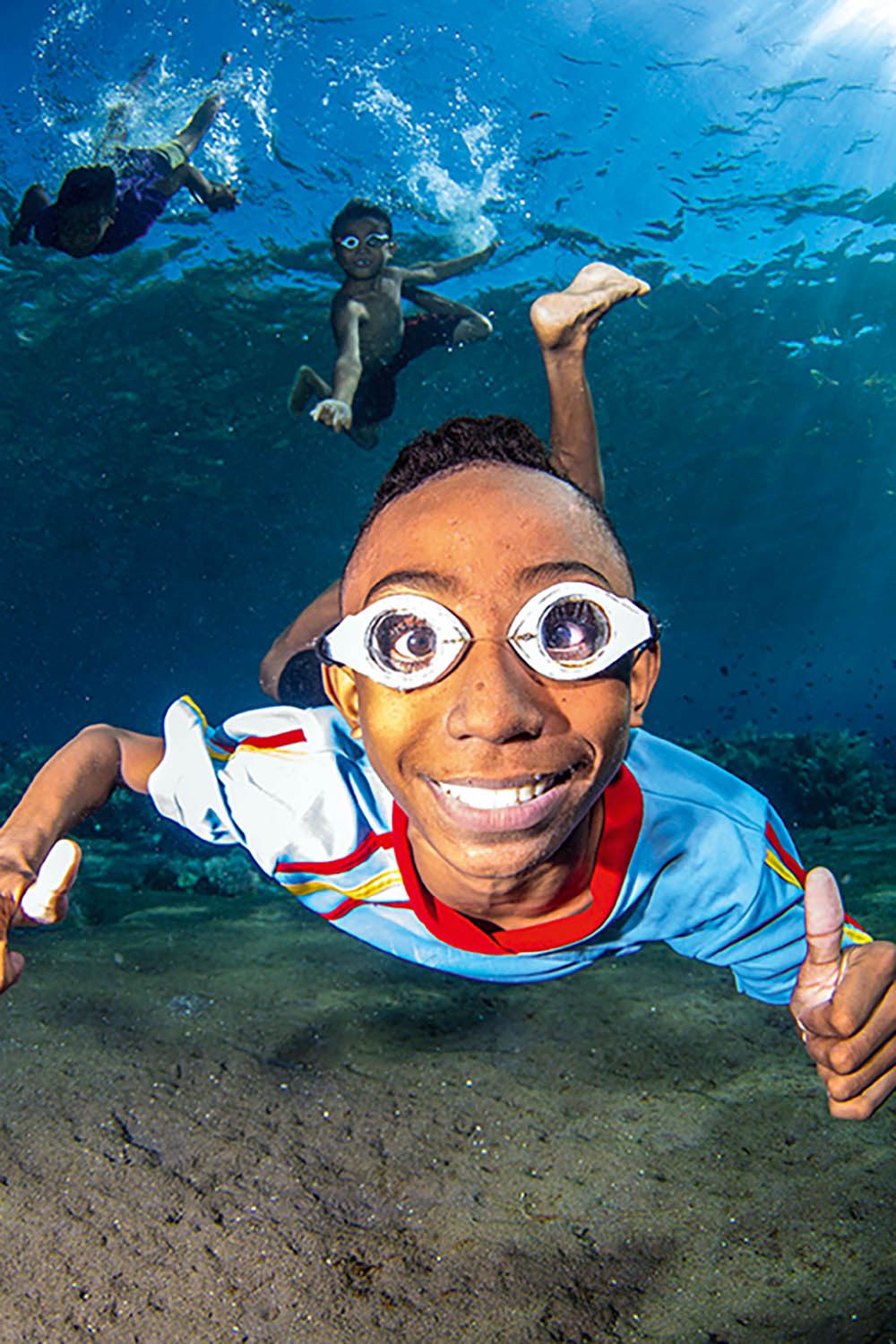 A boy freediving in Alor with his home-made goggles.

CONCENTRATING HARD as I tried to capture on my camera the tiny clownfish dancing through the arms of an anemone, I was suddenly aware of someone watching me.

Being almost 5m down, I thought it must be my dive-buddy. Looking up, I almost jumped out of my skin to see a young boy grinning at me, looking odd in homemade wooden goggles.

Giving me a double thumbs-up, he slowly swam back up to the surface, before duck-diving back down again, performing somersaults and making funny faces at me as I took his photograph.

Very soon he was joined by some friends who had swum from the shore, treading water and taking turns to duck-dive down, pushing each other aside if more than one dived at the same time, jostling for position in front of my camera lens, posing ever more inventively in a competition to see who could make me laugh the most.

What amazed me was not only the almost constant diving to depth, but the length of time they stayed under water on one breath-hold. I noticed that some of them were using their flip-flops as paddles, which seemed to help them to swim more effectively under water, but might just have been a way to keep their shoes safe.

For the next 40 minutes they entertained me and the other divers in my group with their antics until we had to ascend, the air in our tanks depleted.

Once on the surface, I could see that the boys were aged between about eight and 12. They splashed and laughed on the surface around us, ducking each other and performing haphazard synchronised swimming moves, waving their legs in the air.

We were diving from the Mermaid II liveaboard, on route from Raja Ampat to Maumere in Indonesia – a special 16-night biodiversity trip through seven seas – and were currently moored in the middle of the Alor Islands.

Part of an extinct volcano, jutting up from the ocean, they consist of a group of two major islands and several lesser islets in East Nusa Tenggara province. They are part of the Lesser Sunda Islands, lying between the Flores and Savu Seas and the Pacific and Indian Oceans.

Our support rib approached us slowly. As we took our kit off and boarded the boat, some of the boys also clambered aboard, while others hung onto the ropes attached to the inflatable sides, all set to enjoy a gentle cruise back to the liveaboard.

The boat-crew were clearly used to the boys from previous trips to the area and chatted to them in Indonesian, translating our questions and the answers, which the boys found very funny, guffawing and giggling loudly.

Approaching Mermaid II, we saw a whole group of villagers in dugout canoes, tiny fishing-boats and rafts made from all sorts of flotsam and jetsam heading the same way and clambering onto the duckboard at the stern of the liveaboard. We laughed to see several children, some only toddlers, in tiny dugout tree-trunks, using pieces of polystyrene as paddles.

They obviously had no fear of the ocean, because they delighted in filling the canoes with water until they were almost submerged.

We were diving off Yan village on the island of Pura, a lone rock in the middle of the Alor Islands. Being so remote, the islanders have no choice but to live off the sea. Fishing is a way of life.

Located in the centre of the Ring of Fire, the islands consist of volcanic sand and rock which, along with the mix of several nutrient-rich currents, makes for an incredibly healthy reef system full of marine life, from the deepest depths right up to the shore.

The villagers have made the most of the gently sloping reefs on their doorsteps by choosing to freedive, and set up home-made bamboo fishing-cages to complement more traditional types of fishing using boats.

Swimming the short distance from shore dragging the cages, they place them on the slopes at depths from 5 to 10m, securing them with rocks. While diving we had spotted several different shapes and sizes of cages full of colourful fish, dotted over the reef at various depths.

I had to stop myself from using my knife to cut the cages open, reminding myself that these fish were essential for the villagers’ survival.

MY IMPRESSION OF the children being so comfortable under water, able to swim almost before they could walk, and the freediving fishermen being able to stay submerged for prolonged periods of time, made me think of the Bajau – the famous sea gypsies. I wondered whether these villagers were somehow related to this amazing people.

The Bajau are seafarers, originally of Malay origin. Over centuries they have lived almost entirely at sea, sailing their large wooden homes, called lepa, on floats around the oceans between Malaysia, the Philippines and Indonesia.

Legend has it that they were originally a land-dwelling people who went to sea in search of their king’s daughter, who had either been swept to sea by a storm or kidnapped by a neighbouring kingdom. Unable to find her, they stayed at sea rather than face the king’s wrath.

Studies put their origins as sea-dwellers at around 800 AD, though they were first recorded by European explorers in 1521.

These nomads had long fascinated me. I had watched a documentary about them several years before, and wished I could meet some of them. 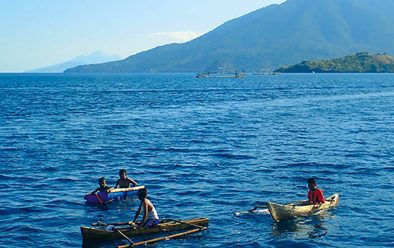 When diving Tubbataha, I had seen a small colony of fishing-boats lashed together, with bamboo huts on their decks. I wondered after seeing the documentary if these had been Bajau.

Last year, when visiting Bintan Island (Stopover in Bintan, December), we saw many sea-dwelling people, living on huge houseboats crafted from bamboo, with fishing-nets strung beneath them, both docked at a long pier near the village of Trikora and sailing around the island.

Monica, the manager of Dive In Bintan, had confirmed that these were Bajau who visited the area occasionally. We had been lucky to see them while we were there.

As well as some floating houseboats moored to the pier, there were others on stilts belonging to those who had chosen to settle in one area rather than roam the seas. Although settled, they still lived on and from the sea.

Some houses had small generators while others used the power on the pier.

I was curious to see quite a few well-cared-for cats and dogs roaming around the floating village. From the pier, we could see motorbikes, fridges and TV aerials inside many of the open-fronted houses, and a makeshift dry-dock for fishing-boats between two of them.

Monica told me that the lepa houseboats would turn up mysteriously, coming in for a few days to a week and expanding the sea village considerably. There seemed to be no logic to their appearances, and it could be months between visits.

While diving around Bintan we saw quite a few of the floating structures individually, their huge fishing-nets hanging under the bamboo platform, or actually lowered to fish.

The nets, bringing in a much larger catch, were now preferred to freediving, but in the shallows over the reefs we had also seen some of the men spearfishing while freediving, spending many minutes under water before surfacing.

MANY STUDIES have been done on these people, because of their extraordinary extended freedive skills. Many intentionally rupture their eardrums when they’re young, to allow them to dive and hunt more easily. Unfortunately, this causes more deafness than would otherwise be expected in older Bajau.

They tend to work for around five hours submerged each day and have, over millennia, adapted genetically to facilitate their lifestyle.

In 2018 studies found that Bajau spleens were up to 50% larger than those of land-based people. When spleens contract at depth, haemoglobin-rich blood is expelled into the bloodstream. With larger spleens, more is expelled, allowing longer breath-holding.

It was also found that the Bajau had other genes that might help to expel CO2 and one that helps with hypoxia (blackouts) at depth. Further studies have found that they have better underwater vision than Europeans, honed over so many years spent under water.

Back in Alor, as we dived our next site close to where the boys had been, we saw many more bamboo fishing-cages.

Ascending up the reef towards our safety-stop depth, I saw one white-haired man, seemingly very old, sink another cage, taking time to position it carefully and placing rocks to hold it in place.

It must have taken more than four minutes before he slowly swam to the surface, before ducking down almost immediately to check the cage once again, to ensure that it was anchored properly.

Our next dive in another location close by saw a carpet of anemones waving arms, a kaleidoscope of patterns and textures. It looked like my grandmother’s 1980s living-room shag-pile, abundant with dancing anemonefish. 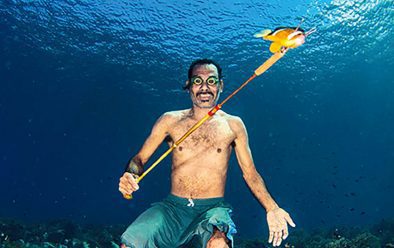 Local fishermen spearfishing for bait in Alor. It might be a sad sight for leisure divers, but for the freedivers it’s their living.

Towards the end of our dive, swimming along the reef at 8m, I saw a couple of fishermen diving deep, using homemade spears to catch anemonefish. In their tiny funny-looking wooden goggles, each of them swam over to show me their catch before ascending to the surface.

It was sad to see the characterful little fish battling on the spears in their last throes of life, but their deaths were essential, I was later told, as they were used as bait in the bamboo cages.

Two more fishermen freedived to the reef and used rocks to anchor a large net, with floats attached to the top to help it stay in position. I watched them work, staying under for many minutes at a time, before being distracted, again, by boys diving to have their photos taken. The experience was enchanting and amazing.

More dives over the next two days had us expecting either the freediving fishermen or the boys to show up every time. On a night-dive on a mini-wall,

We were surprised by a huge net, almost invisible in the darkness, reaching over 100m or more into the distance. The freedivers had set it late that afternoon to catch any fish hunting prey at night.

With sustainable fishing and some trading with land-dwellers, the Bajau have survived for hundreds of years, and, even with the inevitable acceptance of some modern technology, can continue to survive by living from the sea.

OTHER FEATURES FROM THE INDONESIA DIVER SPECIAL – May 2019 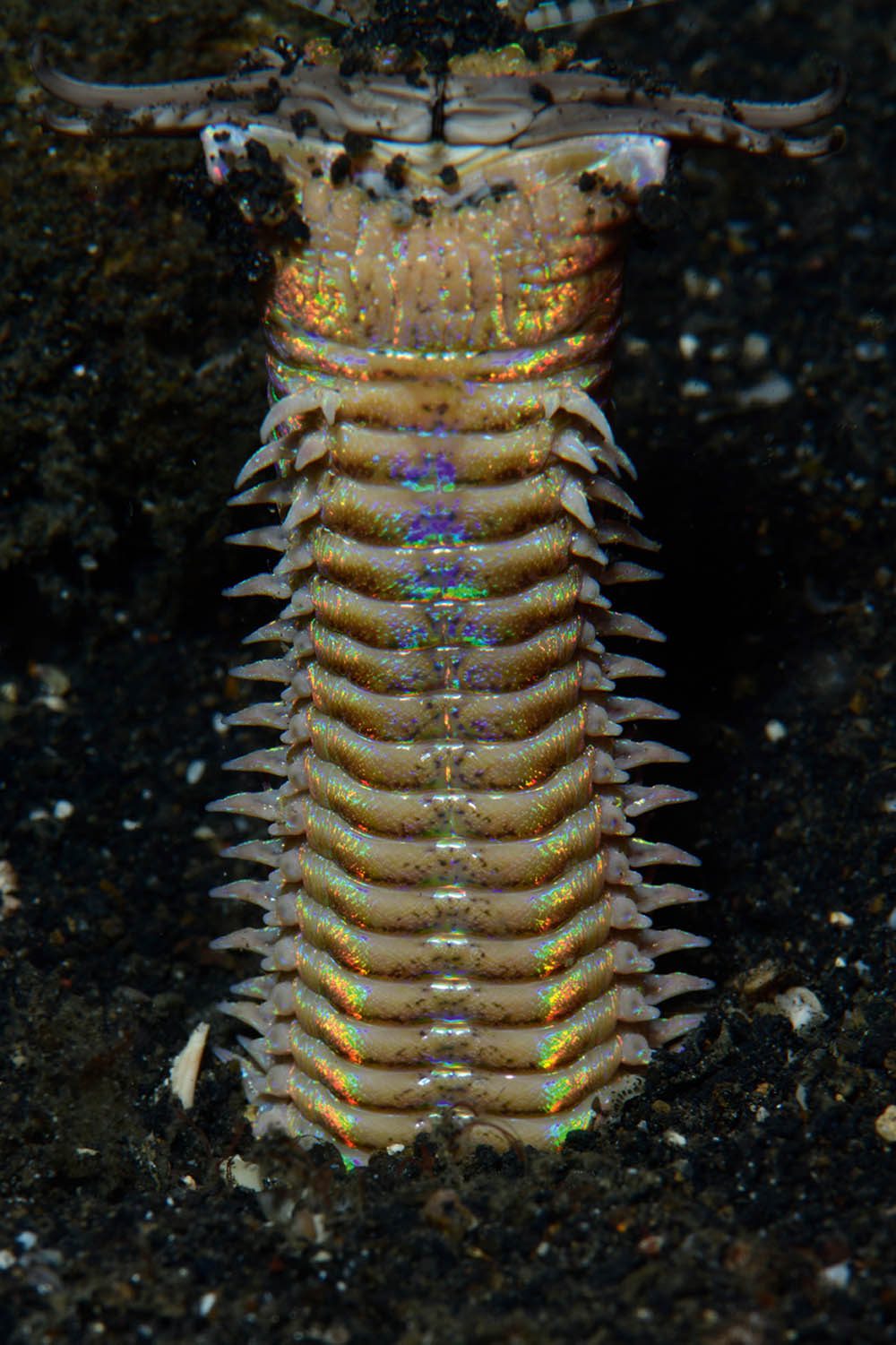 When it comes to muck-diving, Lembeh Strait is ground zero. Story and photos by JESPER KJØLLER 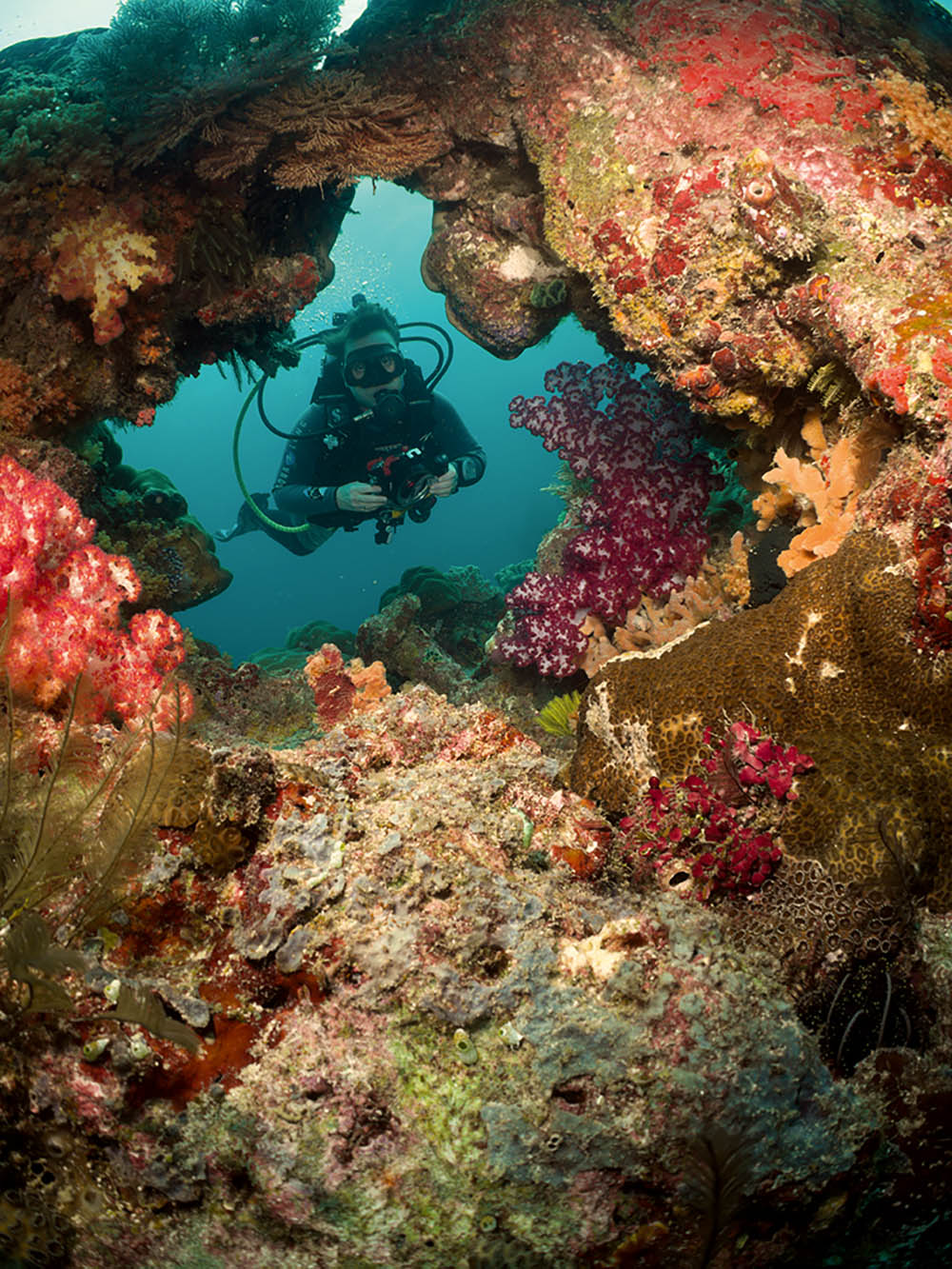 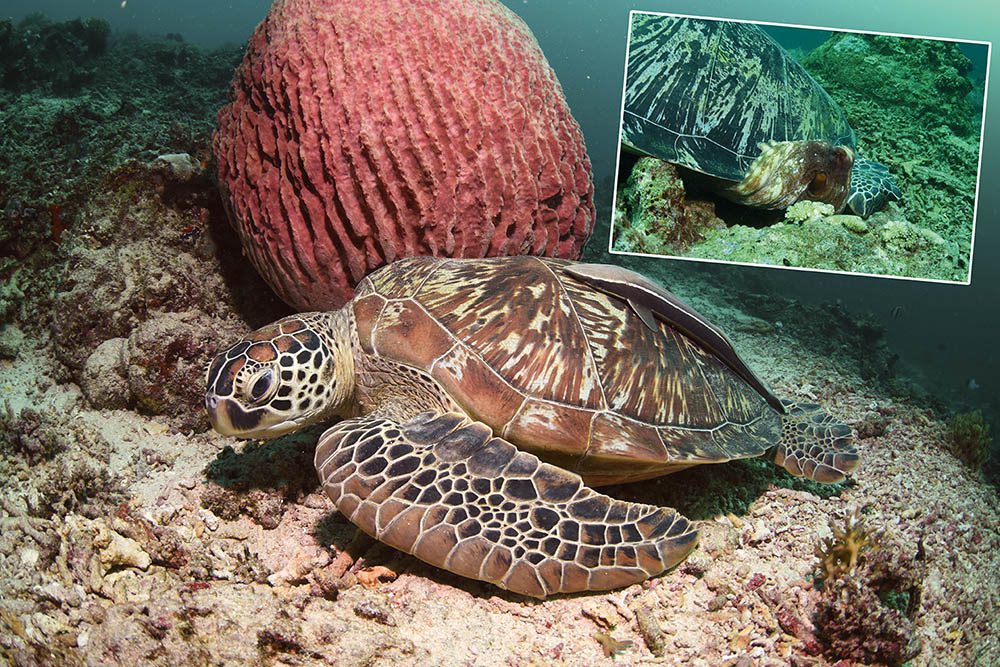 NIGEL MARSH recently visited Indonesia’s tiny Gili Islands off Lombok, to find out whether it was diving business as usual after the earthquakes that rocked the region last year

Making the most of North Sulawesi