More than 80 years after the sinking of 20th-century French explorer Jean-Baptiste Charcot’s ship in Iceland, NICOLAS JOB dives the wreck 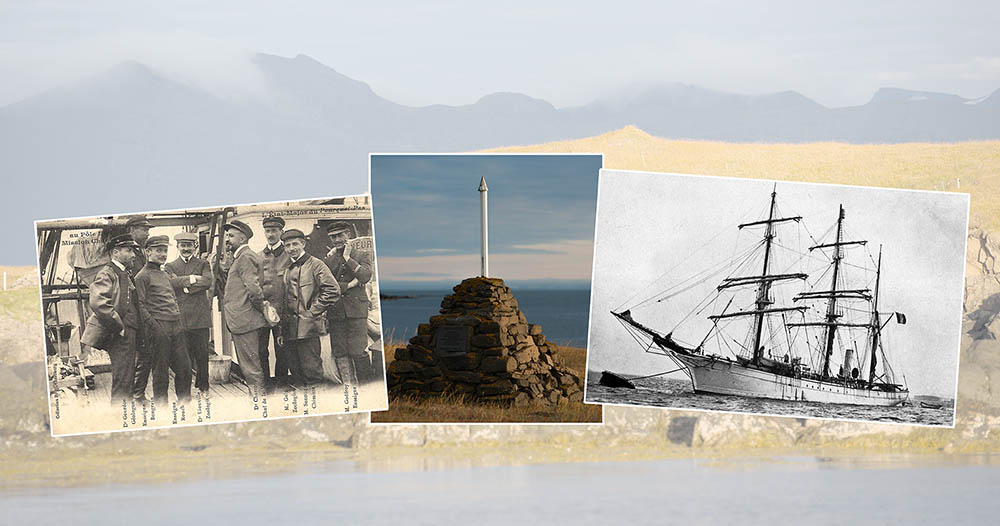 Left to right: Members of the expedition team, with Charcot in the centre; a cairn commemorates the wreck; the Pourquoi Pas? at anchor.

Of the many ships that have been wrecked in Icelandic waters, the three-masted barque Pourquoi Pas? remains engraved in many memories on the island.

It was 16 September, 1936, and the polar-exploration ship was returning from a mission to Greenland to deliver scientific material back to France.

She had stopped to refuel in Reykjavik, but when she set out again she was overtaken by a terrible storm.

Proving difficult to manoeuvre, the ship drew closer to Iceland’s west coast, and there struck rocks. She took only minutes to sink, taking with her one of the pioneers of polar exploration, Jean-Baptiste Charcot.

Charcot, aged 70, was a medical doctor and scientist who by then had been exploring North Polar regions for more than 30 years. Before that he had led the French Antarctic Expedition of 1904-07, but the following expedition from 1908-10 was his first aboard the Pourquoi Pas.

On that trip he had explored the Bellinghausen and Amundsen Seas and discovered Charcot and Loubet islands and Marguerite Bay.

From 1925 until the time of his death, he dedicated his time to exploring eastern Greenland and Svalbard.

Pourquoi Pas? steersman Eugène Gonidec logged the ship’s final hours: “September 16: Seas 29 to 46ft, SE winds 64+ knots. Wind blows with an incredible violence. Ship steers very badly… From 2.30 to 3am we intermittently catch sight of a light that nobody can identify. Reckon however that it’s Akranes…. 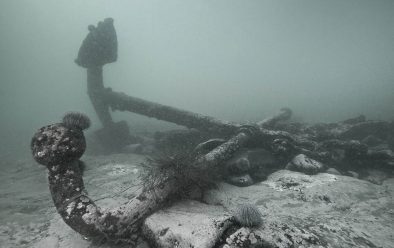 One of the ship’s anchors.

“At 5.15 the Pourquoi Pas? touches underwater rocks twice. Steam gushes out from the boiler, the machine becomes unusable… Bosun Le Guen is hurled into the sea… Captain has everybody wake up and rig the life-belts. He realises that he is not able to save Le Guen…

“At about 5.35, the captain orders to moor port side, then starboard side shortly afterwards. Because this order could not be executed, the chains slip by fast. The ship first avoids rocks but crashes on one at 5.45am, at 1.5 miles from the land we glimpse now and then…

Try to pump the water, vainly, water is rising too fast. At about 6, with the water flowing up to the middle of the deck while I push the big lifeboat, I fall into the water… On the wave crests, I can see the land and a house… Half-conscious, I eventually managed to reach the shore, where I black out.

“At about 9am, I’m taken in by a young Icelandic fisherman, and recover my senses at about 12, after the whole family took care of me in the most admirable way.”

Eighty years on, we went back to the shipwreck site to find out what was left of the Pourquoi Pas?

The wreck lies 1.7 nautical miles off the coast near the town of Borgarnes. To reach the small beach where a boat is waiting for us, we follow a 15-mile-long track towards a little farm, Straumfjödur.

The straight road crosses an arid landscape, the view stretching towards the emblematic Hafnarfjall mountain. The sheep, ponies and birds of prey of the Icelandic wilderness don’t seem at all interested in our presence.

After nine miles an old truck marks a turning point, then we drive on. The track ends in a succession of bends threaded through a maze of islets, and finally we reach the five buildings of the farm.

We recognise on the left from pictures the little square white house where Eugène Gonidec was taken in the day after the shipwreck.

At the end of a meadow is a cairn set up to commemorate the shipwreck, and below us lies the beach where the sailors’ bodies, including that of Charcot, were collected.

Swanur Steinarson, the farm-owner and the keeper of the wreck, takes us out to the wreck-site. Visibility there is never really satisfactory, but we have planned to do our diving following a series of clear days, to maximise our chances of getting a good view. 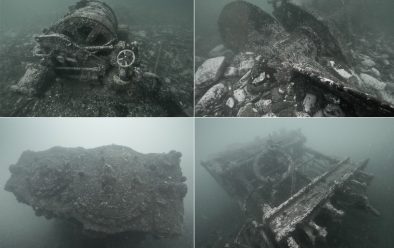 Above, clockwise from top left: One of the winches; the main two-bladed propeller; side and overhead views of the engine.

The Pourquoi Pas? lies only 15m deep, so has been very exposed to winter storms, and its timber structures have disappeared. Everything that remains is gathered in an area measuring 40 by 15m.

The two-bladed propeller is still in place at the end of its shaft, and we can see the compound-type steam engine, composed of two pistons and, at the front, the double-furnace boiler.

Around us we can see many pieces of furniture, a voltmeter and the emergency propeller. Past the boiler, we observe one of the Pourquoi Pas?’s winches.

The windlass and the capstan are located further ahead. And to link the two anchor-chains we have to follow the length of the uncoiled one, which lies flat on an axis perpendicular to the other one.

The first anchor we see lacks one of its flukes, probably broken during the sinking. The second one, much further on, remains intact.

Autumn is the time for the Northern Lights in Iceland, and we see them later above the farm.

The story of the Pourquoi Pas? has been largely forgotten in France, but in Iceland the shipwreck is part of the national maritime memory.

In the town of Sandgerdi, people have even dedicated a museum to the famous vessel: charcot.is/le‐musee‐charcot