Where in the world can you ride out in a small boat and jump into the ocean to see dolphins, sharks and whales up close, all in the same day? It’s possible in South Africa when the greatest show in the ocean takes place. MORTEN BJORN LARSEN joins the Sardine Run 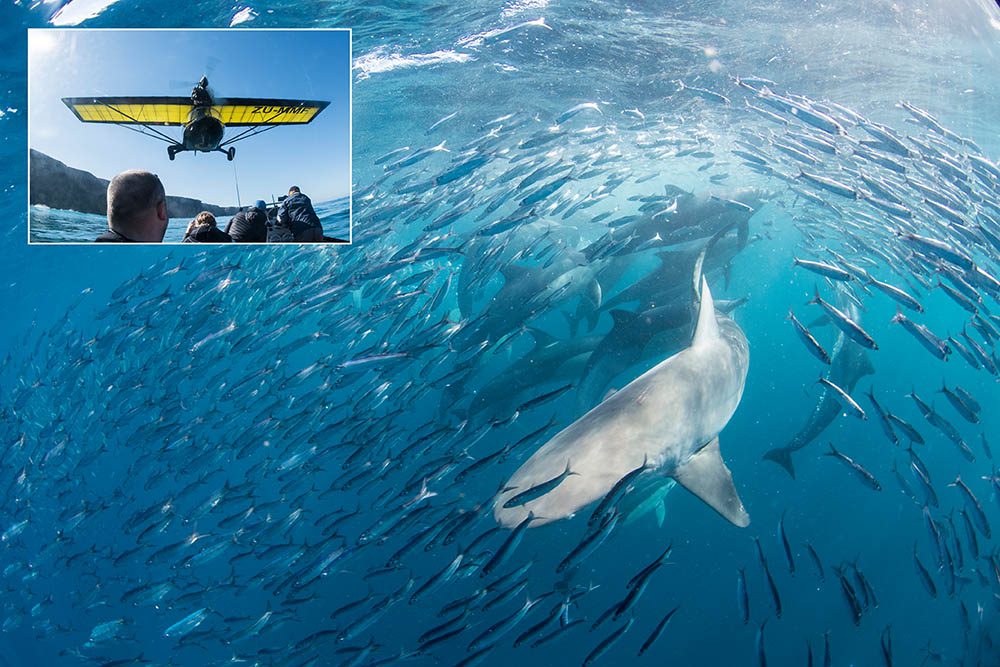 Morten admits to rarely getting both a shark and dolphins in the same image. Inset: The spotter-plane pilot comes down to say hello.

Nature does whatever Nature wants… it’s a waiting game!” said our RIB captain, Louis, meaning that the only thing we could do was to wait and see what mood Mother Nature was in.

Sometimes that was a good thought on which to focus as we sat there, looking out at the choppy Indian Ocean, with no sign of action.

I kept looking from side to side, hoping to see what is called “boiling water”. This is a way of describing the visual effect when a tight school of sardines is close to the surface. When you see this phenomenon, it can be a good sign that predators are hunting and eating the sardines.

We also looked for birds diving from the sky to catch the small fish. All the while, Louis was listening for interesting calls from Janneman in his spotter plane. If the wind was right, Janneman took off early in the morning to be our eyes in the sky.

Suddenly, there was a call from Janneman that made everyone in the RIB sit up and listen. The walkie-talkie was scatting a bit, but we had no doubt when the pilot raised his voice and spoke of action with dolphins and a baitball – and then got on to the best part: “It looks static.”

It was static. That meant that the sardines were surrounded and not moving at any pace faster than a human could follow. Captain Louis put the RIB to full speed, because we had about five minutes to reach the baitball.

As we approached it I put on my fins, weight-belt, mask and snorkel.

We didn’t yet know if it would be possible to scuba-dive around the baitball, but we could quickly see that all the action was near the surface.

Now the expression “boiling water” made complete sense. We decided to jump in without scuba tanks.

I swam as fast as I could. Just in front of me was the baitball, and it was under full attack from a pack of common dolphins.

The dolphins work together in a very well-planned pattern of blowing bubbles beneath the sardines to keep them close to the surface.

As I approached the baitball, I could see thousands of sardines swimming in tight formation. They do this to make it more difficult for predators to pick out individuals.

I lay on the side of the baitball, trying to calm myself, but the adrenaline and the joy of finally experiencing this phenomenon made my heart beat like crazy.

Then, in a swift move, the baitball turned towards me, just as the dolphins attacked again, seemingly at the speed of light. I had just ducked my head beneath the water when the attack was over, almost as quickly as it had begun.

I swam a little away from the baitball, but now there was no sign of dolphins, only the sardines swirling around.

Sardines moving at full pelt, trying to get away from hungry dolphins.

Suddenly I heard the loud sounds that dolphins use to communicate, and then, seconds later, they came thundering back from the deep.

This time I got to shoot a few photos before the attack was over. By now I had learnt that the dolphins communicate just before an attack. That proved to be the signal for me to get into position with my camera.

For the next 45 minutes, I succeeded several times by taking a deep breath as soon as I heard the dolphins communicate, and diving the metre down toward the baitball.

This technique didn’t work every time they attacked; sometimes, I just stayed at the surface to enjoy the show as the dolphins came smashing through the exposed sardines, and the water filled with fish-scales.

At one point I saw a silhouette beneath the sardines. It was moving differently to the dolphins, so I took a deep breath and dived down a bit.

Then I saw what it was – a dusky shark, a species capable of growing up to 4m in length. Duskies have sardines listed high on their menu, so it had smelt dinner and come to join the party, but the dolphins still weren’t finished and kept attacking, blowing bubbles and keeping the baitball tight.

I found that, if I shot against the sun, particles and scales from the sardines in the water made the water look greenish, but if I shot with the sun to my back, the water was a much more pleasing blue.

Once I realised this, when the sardines were attacked again and I had spotted the shark, I dived with the sun behind me.

I looked through the viewfinder and shot away, only this time I also saw the shark speeding through the baitball in the opposite direction relative to the dolphins. In other words, it was heading directly towards me.

I had been lucky enough to swim and dive with sharks several times before, so I kept calm and held my breath as the shark came very close to me. The dolphins also came close many times, but they easily manoeuvred around me. I will admit that at times it felt a little chilling to be in the middle of this feeding frenzy, surrounded by predators.

When the baitball had shrunk to almost nothing and the attacks seemed to stop, we decided to crawl back onto the RIB. When I handed my camera and weight-belt up and pulled myself from the water, I realised how exhausted I was.

However, I also felt very fortunate to have witnessed perhaps the greatest show Nature has to offer.

Many of us have seen it on TV, on those fantastic BBC series in which sharks, dolphins and birds hunt and eat huge schools of sardines off the south-east coast of South Africa. The Sardine Run lasts only for about six weeks, typically starting in mid-June.

Millions of sardines follow cold currents that, at this time of year, come close to land. This, in turn, attracts a number of predators, including common and bottlenose dolphins, gannets, Bryde’s and humpback whales, copper, bull, dusky and sand tiger sharks, seals and even, on occasion, sailfish.

For the past 10 years, the Sardine Run had ranked high on my wish-list. I learnt in 2017 that Danish company Kingfish Dive & Travel, with which I had travelled successfully before, had added the run to its programme for 2018.

Because I live in Copenhagen, I visited its offices to learn more about the trip. As you can imagine, it didn’t take long to be convinced to book a spot for the 2018 Sardine Run.

As I said, we never know what mood Nature will be in, so you can’t rely on seeing baitballs every day. However, given all the other things we saw during the week, it didn’t matter that much.

The Sardine Run’s main attraction might be baitballs under attack, but we experienced more than enough alternative action while sailing around to pack a whole ocean safari. 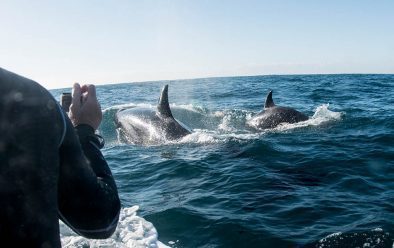 Orcas swim beside the RIB.

We saw more humpback whales and dolphins than I could count and, last but not least, a small pack of orcas. Though there were fewer orcas, just seeing these magnificent animals come close to the RIB was enough for me, so it really didn’t matter how many there were.

Further, when we first spotted the orcas they were on the move, so it would have made no sense to jump in and try to follow them in the water. So we stayed in the RIB and followed them for as long as possible, an experience I will never forget.

In addition to searching for baitballs, we spent some time trying to get into the water with humpback whales.

The whales can be curious and playful, but we often saw them breach and then dive too far away from us to join them.

Still, we had some very close encounters, thanks to Captain Louis’s sharp eye for wildlife. When he spotted a pack of humpbacks, he could tell whether or not they were about to dive and if there would be a chance to swim with then.

When he said “give it a go” we slid into the water as quietly as possible, in the hope that the whales would swim past or just below us.

Everyone from both RIBs had some unforgettable encounters with humpbacks coming up just beside them, or diving right beneath them at a very slow pace, showing their full beauty and grace. It was a momentous experience to witness these giants in their own element.

One of our first days was very quiet, with almost no wind.

In his thick South African accent, Captain Louis explained that “we want the sea to be alive” when hoping to see baitballs. He suggested that we sail closer to shore to see how things looked there.

Often the current and visibility close to shore make it impossible to scuba-dive, but because it was such a quiet day, Louis thought it was worth checking out.

We saw nothing that looked remotely like the boiling water from a baitball, and the few dolphins we did see seemed lazy and not at all in hunting mood.

He was right. The conditions were great for diving at a site called Raggies, a nickname for sand tiger or raggedtooth sharks. The reef where they usually hang out starts at about 25m depth, and the first 10m always has a bit of current.

We made a negative entrance to get past the current and allow ourselves as much time on the reef as possible.

While we dived I looked around and initially thought there was nothing to see, but as soon as the reef came into sight I literally landed on top of a 2m sand tiger.

It swam away, and I began to enjoy the many colours of the magnificent reef and the resident sharks. I noticed a small group just under an overhang, so I let myself glide down to them.

Luckily, they didn’t need much time to get used to me, and they let me get close enough for some images. Despite the lack of baitballs and whales that day, we still had a world-class dive at Raggies.

This stretch of ocean off the South African coast is fantastic. There are enough amazing experiences to take your breath away every day – no matter what your level of experience!

GETTING THERE> Daily flights with BA and South African Airways to Durban.

ACCOMMODATION> The Creek close to Port St John’s has cosy huts and a common-room where all meals are served, thecreek.co.za

WHEN TO GO> The Sardine Run usually occurs from mid-June through July. Water temperature is around 20°C so a 5mm suit plus shortie with a hood is recommended, and 3mm gloves. Some divers use 5mm open-cell freediver suits.

PRICES> Kingfish Dive & Travel has a group trip in 2020 with flights from London on 28 June with nine days searching for baitballs. Including flights, transfers and diving it costs £4050, kingfish.dk/expeditions