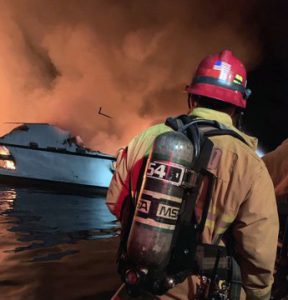 All 33 passengers and one crewman on the southern California liveaboard Conception are now presumed dead, following the fire that swept through the vessel early on Monday morning (2 September), reported on Divernet yesterday.

The bodies of 9 males and 11 females have so far been recovered, with divers reported to have found at least four others in the wreckage of the boat, which lies at an angle down to 20m. DNA testing now has to be carried out to formally identify the bodies.

While the passenger list has not been released, a number of names have been made public through social media posts. Most of the passengers were from the San Francisco Bay area, according to the Santa Barbara sheriff’s office.

Among them was marine biologist Kristy Finstad, 41, owner of Worldwide Diving Adventures, which had chartered Conception for the three-day dive trip. After intending to join the cruise, her husband and business partner Dan Chua had instead decided to lead a dive group in central America. Among other victims named was a family of five.

The 24m Conception was on the last day of the trip, which had been exploring dive-sites around Santa Cruz island in the Channel island National Park, about 20 miles off the mainland.

Investigators are now trying to establish the cause of the fire and why none of the passengers sleeping below-decks in the dormitory area had time to escape.

According to the US Coast Guard the 38-year-old liveboard, operated by Truth Aquatics in Santa Barbara, had undergone regular safety inspections and any reported defects had been promptly fixed. Its most recent inspection had been in February.

Regular passengers have told press that pre-departure safety briefings were comprehensive, and that there were fire extinguishers at every level.

The boat had been moored close to shore on the north side of Santa Cruz. Captain Jerry Boylan and four of the five crew had been in the wheelhouse when the fire broke out, and escaped on Conception’s 5m RIB, reaching a nearby fishing boat to summon help.

The fifth crew-member, deckhand Allie Kurtz, 26, had been sleeping below in the passenger sleeping area. There were two sets of steps leading up from this area to the galley on the main deck, though the emergency hatch at the rear was rarely used.

The sleeping area contained four rows of timber bunks in either two or three tiers, with shelves for belongings and divided by curtains. One bunk was allocated for a crew-member.

Ventura County firefighters were reported to have reached the burning vessel within 15 minutes of being alerted but struggled to extinguish the fire, which kept flaring up as new fuel sources, possibly gas tanks, exploded.

Conception, which is reported to have had a glass-fibre-clad timber hull, burnt down to the waterline before sinking.