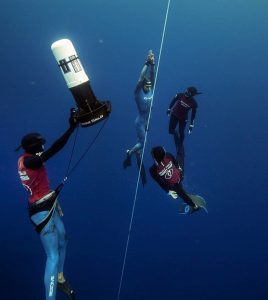 Two freedivers have set the first UK records in the new competition depth discipline Constant Weight Bi-fins (CWTB) – going up and down a line propelled by bi-fins as opposed to faster monofins.

Dean Chaouche from Swansea has set a record of 98m and Helena Bourdillon 75m.

The discipline has only recently been recognised by the sport’s international governing body AIDA. Chaouche set the first of four CWTB records with a 90m dive at the Asian Freediving Cup in June, went to 92m at the Korean Cup in August, and at the end of that month dived to 95m and then 3m deeper two days later at the Freedive Panglao Mini Competition.

Speaking of his 98m record, he said: “When I started the dive I could feel it was taking more energy to keep straight and I could feel the current moving me around on the descent, but I realised I was still in a very comfortable state of mind and knew that I could make the dive, even with the added difficulty.

“The swim up was for sure harder than the previous dive but ultimately successful and a clean protocol. I’m super-stoked with how relaxed I can feel even in competition, and will aim to build on these satisfying dives.”

With national records in free immersion and Constant Weight No Fins, Chaouche is ranked in the world’s top 5.

Bourdillon’s national record is her first, though she beat her own initial record of 73m a day later at the Caribbean Cup Freediving Competition in early August.