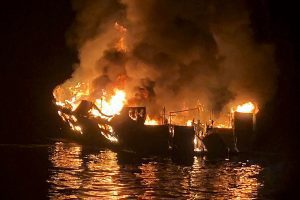 Glen & Dana Fritzler and their company Truth Aquatica, owners of the California liveaboard Conception on which 34 people died in a fire on Monday (2 September), have taken action to minimise possible compensation payments to victims’ families.

The fatal blaze was reported on Divernet earlier this week.

A petition is reported to have been issued to a US federal court to reduce the owners’ financial liability to zero – the current value of the dive-vessel. It argues that they had made Conception seaworthy and that it was properly manned and equipped.

No legal claims are believed to have been filed against the owners, just four days after the tragedy, but their pre-emptive move appears designed to head off the risk of sizeable pay-outs being ordered by a California court. Claims based on the grounds that the owners were or should have been aware of the risk of harm would now have to be directed to a federal court.

The US Limitation of Liability Act, set up in 1851 when boats were not covered by insurance, is said to be invoked by vessel-owners in the event of serious incidents – as happened with the Titanic.

All but one of the bodies of the 33 passengers, thought to be mostly scuba divers, and one crew-member have now been found. However, windy conditions are hindering divers working to prepare to raise the Conception, which lies inverted at a depth of 20m near Santa Cruz island, about 20 miles off the mainland.

The US Coast Guard has stated that Conception had undergone regular safety inspections, most recently in February, and that any reported defects had been promptly fixed.

But the National Transportation Safety Board’s investigator Jennifer Homendy, who is heading a team to establish how the fire started and why none of the divers sleeping below decks was able to escape, has shared concerns with press following an inspection of Vision, another Truth Aquatics liveaboard.

Launched in 1985, Vision is the newest of the fleet of three vessels and slightly bigger but similar in layout to Conception, which went into operation four years earlier.

As on Conception, the sleeping area has capacity for 46 people, containing rows of three-tier single and two-tier double wooden bunks with shelves and ladders, separated by privacy curtains.

Narrow timber steps lead up to the galley on the main deck, with a small emergency hatch at the rear also leading to the galley area.

Homendy told the Los Angeles Times that she had been “taken aback” by the difficulty of access to the emergency hatch, especially for larger people. “You have to climb up a ladder and across the top bunk and then push a wooden door up – it was a tight space,” she said.

She said that her team had also experienced difficulty in relocating switches after turning the lights off. One fire extinguisher at the bottom of the main steps on Vision had been blocked by a rubbish bin, she added.

Federal law was said not to require a sprinkler system on this class of vessel. The smoke alarm was described as a basic home-type system with no wired connection between the sleeping area and the bridge.

The investigators’ final report could take up to 18 months to prepare, although preliminary findings could be released as early as next week.

Meanwhile Captain Jerry Boylan and the four crew who had been sleeping on the bridge when the fire broke out have been telling investigators their story.

One reported being woken by a noise, though not that of a smoke alarm. He described flames “erupting” from the galley.

The captain had sent a Mayday call at around 3.15am before the five jumped down to the main deck, one of them breaking a leg in the process. They reported being unable to get through the galley’s double doors because they were ablaze.

They had then tried and failed to gain access through windows at the bow before heat, flames and smoke had caused them to jump into the sea. Two swam to the stern to retrieve the RIB before picking up the remaining crew.

They drove to a small boat anchored nearby to call for help, and then returned to the Conception in the hope of finding survivors.

One crew-member would routinely occupy a bunk in the passenger sleeping area and that had been deckhand Allie Kurtz, 26, who died in the fire.

Truth Aquatics has suspended all sailings on Vision and its other liveaboard Truth.