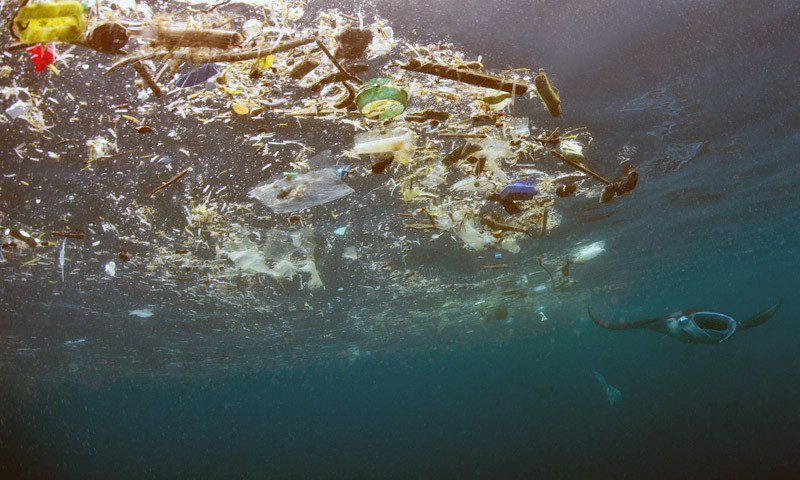 It’s no surprise that filter-feeding manta rays and whale sharks, which can swallow thousands of cubic metres of plankton-filled water daily, are also ingesting multiple plastic particles, but a new study has underlined the scale of the problem. Reef manta rays were found to ingest up to 63 pieces of plastic per hour, and whale sharks up to 137 items.

Marine biologists from the Marine Megafauna Foundation (MMF), Australia’s Murdoch University and Indonesia’s Udayana University came up with the calculation based on an estimate of plastic-particle content in the inshore surface waters of prime manta hang-outs Bali’s Nusa Penida and Komodo National Park, and whale-shark seasonal-aggregation location East Java.

“Manta rays and whale sharks can ingest microplastics directly from polluted water or indirectly through the contaminated plankton they feed on,” said lead author Elitza Germanov, an MMF researcher and PhD candidate at Murdoch University.

Her team of researchers used a plankton-net to trawl for plastics in the top 50cm of the water column, and also counted debris visible at the surface.

Thin film from single-use bags and wrappers and hard fragments made up more than half of the plastics found. Around 80% consisted of microplastics.

Manta faeces and vomit also tested positive for plastics. Particles passing through the animals’ digestive systems were considered likely to expose them to toxic chemicals and pollutants that could accumulate over decades and alter the hormones regulating their metabolism, growth and development, and reproductive functions. Larger particles could block nutrient-absorption and damage their digestive tracts.

“It is difficult to assess how much plastic manta rays and whale sharks actually ingest, because conventional methods used to study animal diets, such as stomach analysis, are unsuitable for threatened species like these,” explained Murdoch Prof Neil Loneragan.

Indonesia is ranked second-worst plastic polluter in the world and many Coral Triangle neighbours are among the top 10, say the researchers.

The researchers say that plastics were up to 44 times more abundant in the rainy season, especially in Nusa Penida.

“The seasonal variability in plastic pollution shows what a difference it would make to clean up river-beds before the rainy season begins,” said Udayana plastics researcher and study co-author Dr I Gede Hedrawan, who suggested that local authorities could also prohibit waste-disposal near water sources.

“We now know that, through exposure to toxic substances, plastic contamination has the potential to further reduce the population numbers of these threatened animals, because they reproduce slowly and have few offspring throughout their lives,” concluded Germanov.