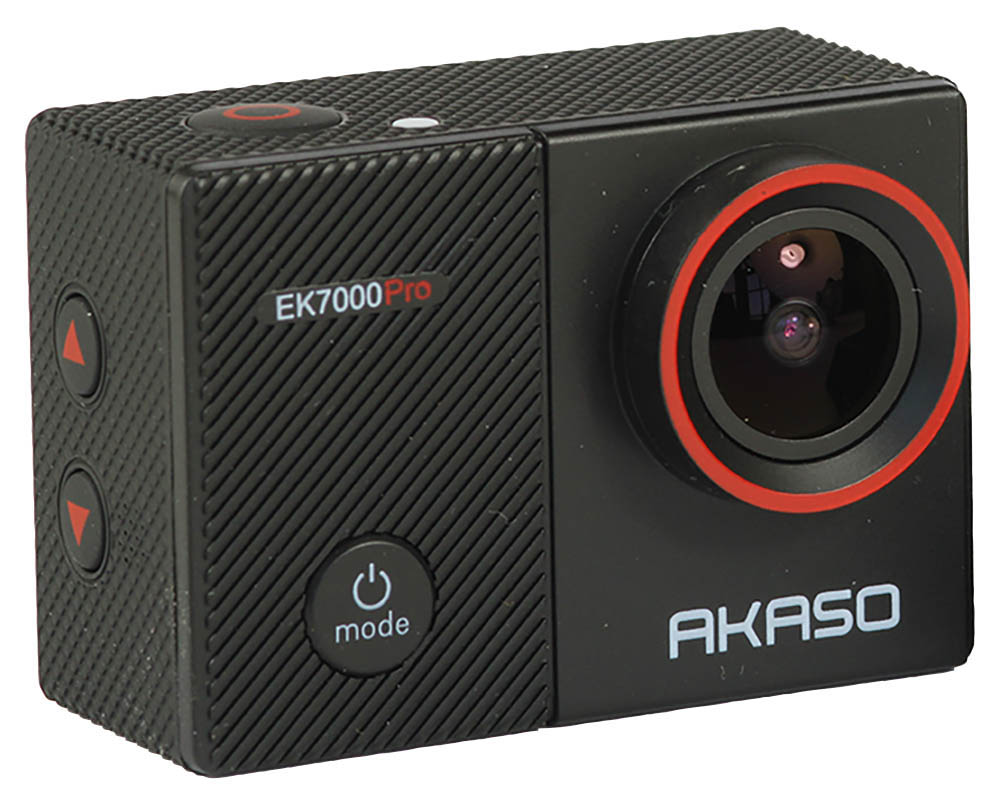 Action cameras are a darn good thing. They’re small, lightweight, inexpensive and the quality of the images and movie footage they produce can be surprisingly good, though I believe that watching some of that footage might constitute a cruel and unusual punishment under the terms of the Geneva Convention.

That aside, I was recently sent an Akaso EK7000 Pro 4K for review. Akaso was a new name to me, but a quick online search revealed its claim to be one of the world’s leading action camera producers, with sales of more than half a million units annually.

It also demonstrated that the one characteristic its cameras share is affordability. The EK7000, for example, will cost you less than a day’s diving.

Open the box and you find the camera with a 30m-rated housing, plus the usual assortment of mounts and sticky pads that you can use to attach the camera to pretty much anything.

The actual mounting system is the well-nigh universal GoPro-style clip-in foot on the housing, or open skeleton housing, that slides into a shoe you’ve previously attached wherever you want it.

Thoughtfully, the housing foot has a neat rubber bung attached. This can be pushed into the forks of the mount to prevent the camera being dislodged from the shoe by accident.

I liked that, it’s lo-tec, useful and works. 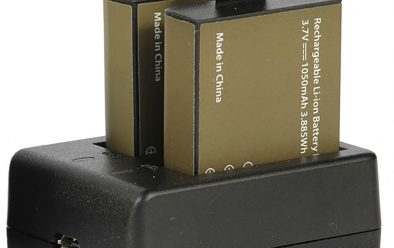 Batteries in the charger.

Also in the box are two batteries and a charging cradle. Genius! I’ve always had to buy a second battery whenever I’ve bought a new digital camera so that I could have one battery in the camera and other charging ready for the next dive, but Akaso has recognised this and included the extra battery in the box.

Claimed battery-life is 90 minutes, which measures about right, though the screen does switch off after a pre-set period to conserve battery life as the camera keeps on recording. This is disconcerting the first time it happens.

The charging unit is as tiny as the batteries, and you’ll need a USB plug to use it. Akaso doesn’t supply one, but you do get the cable to connect the charging unit to the plug you find.

I used my phone-charger, as you probably will.

Popping open the housing reveals that the over-centre latch uses some metal parts, which adds to the quality feel, and the big plastic top-plate is well-profiled, so when it’s closed the lip to pull it open is very tight.

This means that you’re not likely to catch it and open the housing by accident. I struggled to open it at all in gloves, which is good. 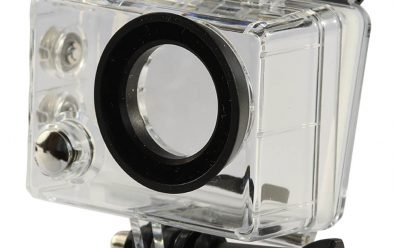 The latch closes with a satisfyingly tight snap, also good, and the camera lens is very well shielded by the port. Even when provoked with edge lighting I got no flare, which is an issue with some action cameras I’ve used.

The camera buttons are set proud enough to press easily but not so much that you’ll catch them by accident. The housing buttons are chrome-finished and seem to be backed by nice, firm springs, so they depress only when you make an effort to use them.

Much easier to use than the buttons, however, is the touchscreen on the back of the camera. It’s generously sized and actually couldn’t be a lot bigger, as it takes up pretty much the entire back of the unit.

The icons Akaso uses are clear, the touchscreen is responsive and setting up the camera takes seconds.

The EK7000 boasts a top video resolution of 4k at 25 fps, plus a variety of lower-quality options including 1080 HD at 60 or 30 fps and time-lapse settings. In Photo mode you get a choice of resolutions, the highest being 16m pixels.

Go into the menus and you can adjust a range of photographic properties including exposure levels and white balance, although there’s no fully manual white balance option.

Instead, you get a dedicated Underwater mode that Akaso says is optimised for bluewater diving.

It even has wi-fi, so you can stream the images to your phone on the dive-deck to impress your mates or upload to social media.

It comes with a non-waterproof remote control for appropriate situations.

Tour of inspection over, I charged the batteries, inserted a memory card, selected video at 1080/30 fps, set a third of a stop of under-exposure, turned the Underwater mode on and went diving.

Those are my go-to settings for any new camera, ready to be refined after I’ve tried it out.

In the water, first impressions were good.

The rear screen was big enough to be properly usable when trying to set up shots, the power and shutter buttons were easily found and pressed even with a thickly gloved hand, and the images the screen was showing as captured looked bright, sharp and colourful.

Later viewing on a computer screen confirmed that the sharpness and exposure were fine, but the colour wasn’t as good as it had looked.

Never mind, a bit of post-processing restored it very nicely without a quality drop, and using the 4k mode and downsizing to 1080 in the edit will improve this further.

That’s all in the top 5-6m of water, of course. Deeper than that and you’ll still need filters or an external light source. 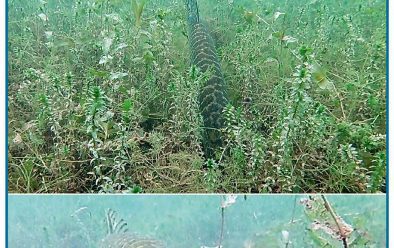 Top to bottom: Direct from the camera – sharp, but the colour isn’t great; colour can be brought out in post-processing; pike portrait, with colour correction in
post-processing.

In absolute terms, the EK7000 doesn’t come close to rivalling the out-of-the-camera colour delivery of a Paralenz, but then it’s about an eighth of the price.

Screenshots taken from 1080 video show the sort of results that it’s possible to achieve.

Exposure control was fair to good. In normal use the exposure was consistent and adjusted very quickly when conditions changed.

I test this by pointing the camera directly downward then rolling it through 360° smartish but not silly-fast, so the camera tracks from bottom to surface to bottom in a couple of seconds.

Many action cameras lag horribly. The worst I ever tried hadn’t figured out that it was no longer pointing to the bottom until it was back there, but the Akaso performed well.

Low-light performance was OK without being excellent, the footage becoming noticeably grainy.

That’s pretty much par for the course with small-sensor cameras like this, and no worse than many other action cameras.

Which brings us to the downsides. Not that they’re anything too significant, more aspects of which you should be aware.

First, the camera didn’t much like shots where some of the frame was brightly lit and some was darker. Really wide dynamic ranges were not handled well, though footage of surface swimmers was actually pretty decent, holding detail in both the bright surface and the darker undersides of the swimmers’ black wetsuits.

Second, you can set the field of view from super-wide to narrow, but narrowing the field of view is achieved by applying digital zoom to the sensor. Essentially, an increasingly small section of the image is magnified as you choose a narrower field of view, which reduces image sharpness and overall quality.

Better set the angle of view to super-wide and zoom in post if you really must. Oh, and turning the image stabiliser on also has the effect of narrowing field of view, reducing the utility of the function.

Third, you have to remember to turn the Underwater mode off above water, otherwise you get red footage.

Bear those few little pointers in mind and you’ll get very decent results from this little camera.

I hadn’t heard of Akaso before the 7000 landed on my doormat, but on the strength of this £77 offering I’m impressed. In absolute terms it’s an 8 out of 10, but I’d happily buy one.