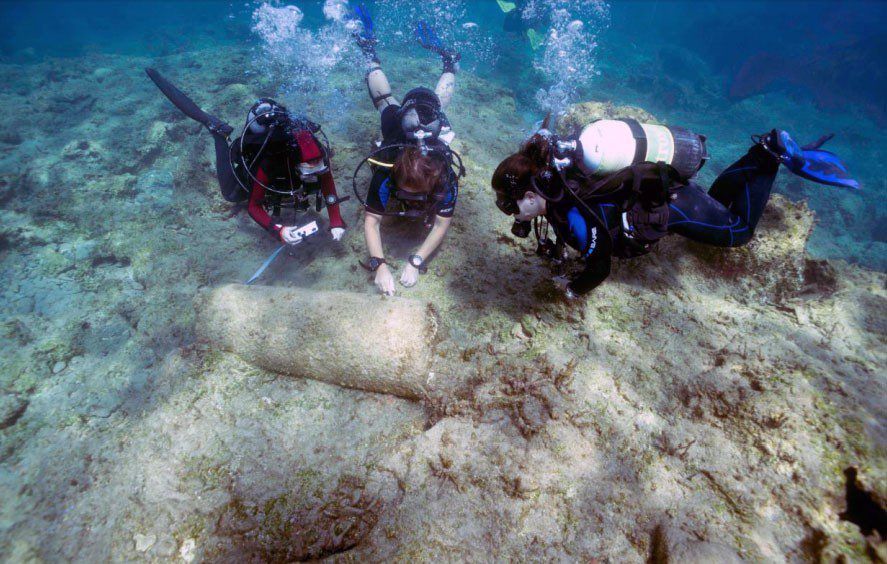 An extensive field of broken amphoras scattered off Akrotiri on the south coast of Cyprus has been confirmed as the remains of a 6th or 7th century AD shipwreck.

A column made from Egyptian Aswan granite was found lying on a rocky outcrop amid some 800 amphora shoulders and rims, all believed to be cargo from what the archaeologists say must have been a substantial vessel. The amphoras are now being analysed in a bid to learn more about the ship.

The identification emerged from fieldwork carried out in September at the Dreamer’s Bay ancient port site on the southern shores of the Akrotiri peninsula. Following up on a survey carried out the previous year, it was led by staff from the Centre for Maritime Archaeology at Southampton University.

A team of professional underwater archaeologists and students, volunteer divers, surveyors, photographers and terrestrial archaeologists continued previous investigations into an ancient breakwater in shallow water (1-4m), according to Cyprus’s Department of Antiquities.

Using DPVs, the dive team were able to identify “numerous” stone anchors, pottery and what appeared to be the remains of a wreck of uncertain date that had been carrying roof tiles.

The survey also took in the surrounding seabed, including the rocky 130,000 sq m area to the east where the amphora field had been located. The work was a continuation of the Ancient Akrotiri Project, a Leicester University-led research project that has been going on for the past four years.

The vessel, loaded with amphoras, was said to be the first undisturbed Roman wreck ever to be found in the island’s waters, as reported on Divernet in June.