When we learn a discipline such as nitrox diving, it’s important that we understand fully the thinking behind it. A recent wreck dive illustrates the point, as SIMON PRIDMORE explains 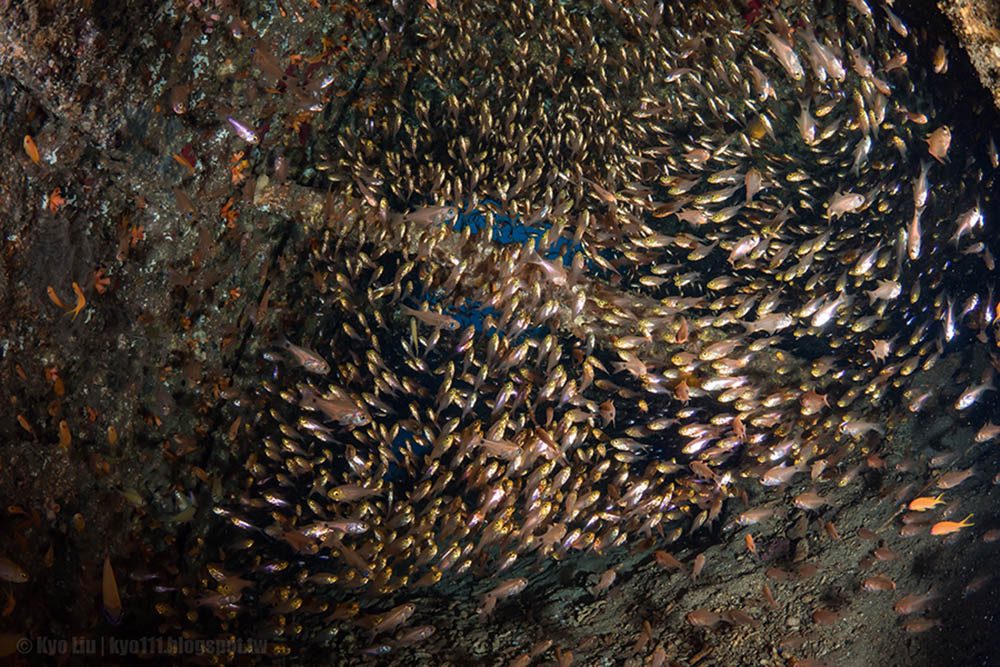 Baitfish inside the shipwreck.

The other day, we joined a group for a dive on a small shipwreck, lying on a sandy plain just beyond the reef wall in the central Philippines.

We were briefed that the site itself did not have much to recommend it. Recent coastal development had led to run-off and consequent coral destruction, while unsustainable fishing practices had taken care of most of the large schools of fish in the area. 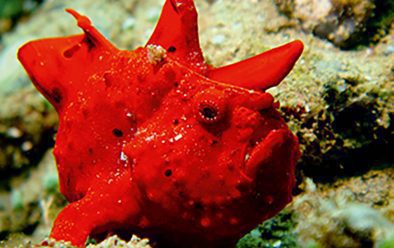 The red frogfish – the highlight of the dive for those who stayed on the wreck.

However, the wreck was an oasis in the marine-life desert, and that’s why we were diving there. The interior was packed full of baitfish and there were plenty of predators around to take advantage, such as catfish, morays and leaf scorpionfish.

We should also look out for a pretty red clown frogfish. There would be cleaner wrasse offering their services to any passing animal with an itch, and a photogenic school of blue-lined snapper cruising around the wreck. So we could expect lots of activity.

The dive-guide did not lie. Even from a distance, we could see that the wreck was jumping with life, as opposed to the surrounding reefscape, which was as dismal as we had been warned.

We hung back a little from the group and watched the rest of our gang drift in to the site. Then there was a beeping sound, followed by another and then one more.

Suddenly, half the group were looking at their wrists rather than the wreck. There was a general onset of anxiety and then they were gone, swimming quickly back to the reef wall.

They searched in vain for something interesting to photograph there, and ended up ascending early.

After the dive, this group complained to the guides that the dive had been a waste of time. Meanwhile, the few of us who had stayed on the wreck were quite happy. The action there had more than made up for the poverty of the reef wall.

I had a good idea why half the group had departed so quickly but I had to ask.

We had all been using nitrox 32 and the wreck was lying at exactly 35m, sitting bolt upright on its hull, so its shallowest point was at about 30m.

As the divers started swimming around it, they got close to a depth of 34m, their partial pressure of oxygen (PO2) reached 1.4, their computers’ nitrox alarms went off and their immediate response was: “We’re in danger, let’s get out of here!”

They acted out of concern for their safety, even though they knew that they were missing the best part of the dive.

That’s admirable in terms of getting their priorities right, but in this case their concern was completely misplaced.

The chart illustrating this article should be familiar to all nitrox divers. If you were not shown it when you took your course, your instructor did a shoddy job.

Scientists and navy divers were using nitrox for decades before sport divers started using it. The science behind nitrox diving, including this chart, came to us via a former US National Oceanic & Atmospheric Administration (NOAA) Diving Officer, Dick Rutkowski, who started teaching it to sport divers in 1985. 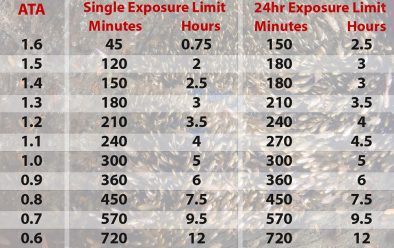 The chart details the level of oxygen exposure at which a diver may be at risk of an oxygen-toxicity convulsion. NOAA deliberately set conservative limits. It didn’t want to lose its scientists, after all.

As you can see, the limits do not simply derive from the PO2; they derive also from the time a diver spends exposed to that PO2. Therefore, spending 150 minutes at a PO2 of 1.4 carries the same risk as spending 45 minutes at 1.6.

But a PO2 of 1.6 is the absolute maximum. Beyond this, the permitted exposure time drops quickly to only a few minutes. So divers were advised always to choose a lower “target” PO2 of 1.5 or 1.4, to allow for defective gauges, defective analysers and diver inattention.

In the beginning, conventional wisdom among the established sport-diving hierarchy was that teaching nitrox to sport divers was dangerous. It would lead to mayhem, with divers suffering oxygen hits and drowning all over the place.

This didn’t happen. It still doesn’t happen today, with millions of nitrox dives taking place each year. Experience has shown that sport divers diving on open-circuit nitrox do not come to harm when diving within no-decompression limits and NOAA oxygen-exposure limits.

When the mainstream training agencies saw this (and also found that they were losing market share to the nitrox agencies), they started running nitrox diver courses too.

Those that came late to the party, however, could not completely shake off their anxiety. This has resulted in 1.4 being considered today as the maximum PO2 for a nitrox diver. Computer makers now preset 1.4 as the PO2 alarm, though on most units this is user-changeable.

The length of exposure factor seems to have been erased from the equation, to

a certain extent, leading to the sort of misguided response we saw among the group in the Philippines.

Nitrox 32 was actually the perfect mix for that wreck-dive. The water was warm, visibility excellent. With no current, the divers had to expend only minimal effort. There was no reason for extraordinary caution concerning PO2 levels.

Nitrox 32 gave the divers significantly more no-decompression bottom time than air. They did not have to go beyond 34m and a PO2 of 1.4 and, even with the extended no-decompression time, the time spent at 1.4 was a tiny percentage of the 150 minutes NOAA exposure limit.

Even when lying flat on the sand, a diver would have had a PO2 of 1.44, hardly something to panic about. As you see from the chart, the NOAA-permitted exposure at 1.5 is 120 minutes.

Sadly, it was unnecessary for the divers to abort. They missed a great dive.