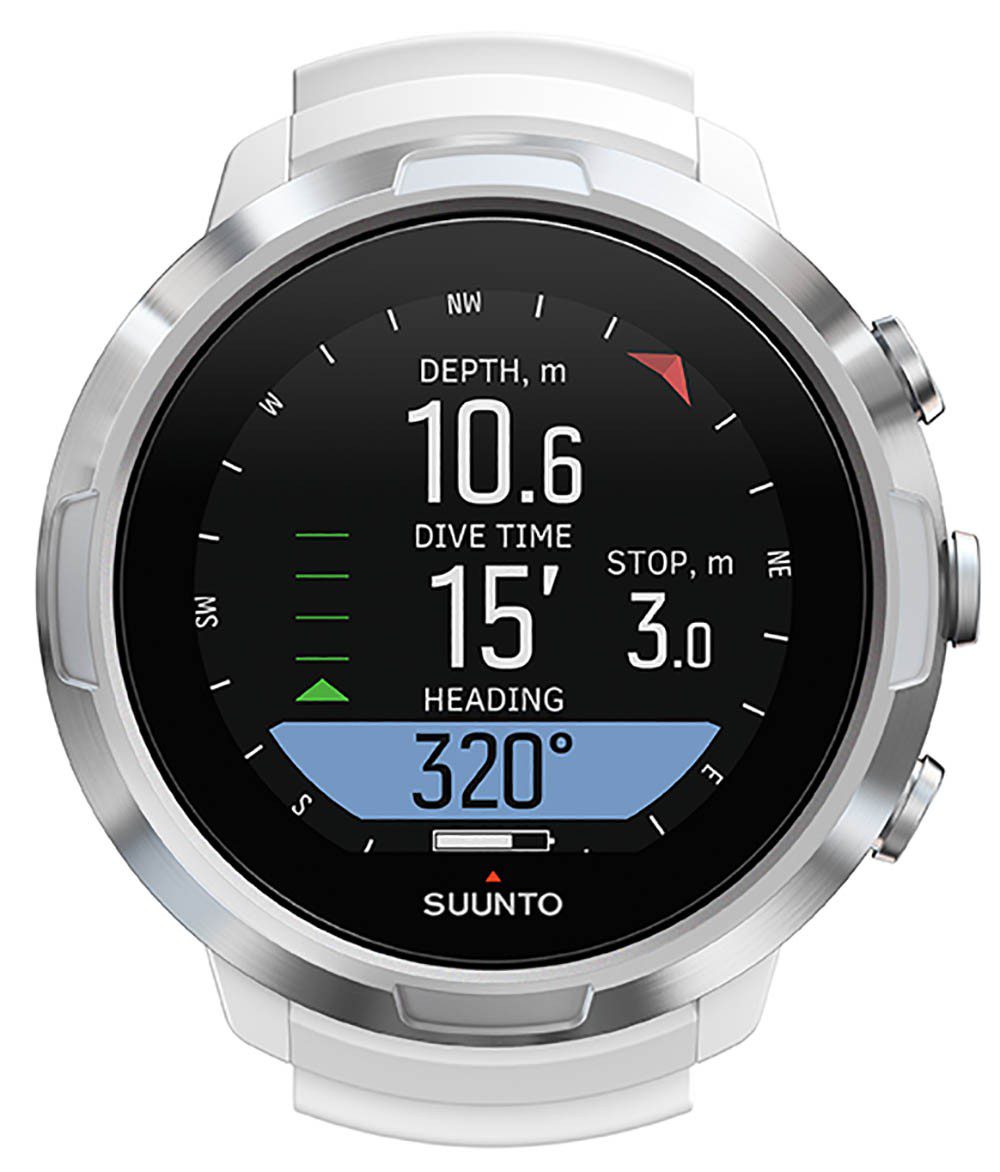 The displays on my personal computer began to fade. Next, a code that I’d never seen before appeared, and then the digits all disappeared.

Back at the surface, I poured the seawater out of the battery chamber and cursed my stupidity.

Dive-computers are the hardest items of kit to test. Even the most basic offers a comprehensive range of functions, many customisable, that must be selected using sometimes complicated menus. They must be set correctly and also understood.

On that dive, I was wearing four computers. Three were test units and the fourth was my own, the one I know how to use and trust. I use it to ensure that I complete my dive safely, in case I’ve got a test computer that isn’t working (it’s happened) or I’ve misread a display (done that).

Or, perhaps, deliberately misprogrammed a mix, or caution zone, to put a computer into deco so that I can see those read-outs while still within the real no-stop times.

So, with my talisman out of action, I turned to one of the test units – the Suunto D5.

I reviewed the D5 in April after attending a pre-launch event at the NEMO tank in Brussels.

It was still a prototype. I dived twice, assessing displays including tricking the unit into thinking it was on a decompression dive and listening out for alarms while wearing a hood.

But there are problems reporting on a pre-production unit, and it wasn’t practical to test either its gas-integration features or, for obvious reasons, the built-in compass.

Moreover, the sophistication of dive-computers means that Mike and I have to pick and choose which features to write about and which to leave out, simply because of restrictions on space. This is understandable if you figure that the D5, for example, has a manual exceeding 60 pages and is an entry-level-to-advanced recreational model.

So, on a recent trip to Gibraltar hosted by Gibraltar SAC, I was able to take along a production D5 to test its capabilities in open water.

A problem with watch-style computers can be the small size of the read-outs. I’m in my 50s, and my eyes were never very good anyway.

As I’m often testing dive-masks, it’s usually impractical to use reading lenses. Once in a while, I’ve even resorted to a camera’s close-up lens to figure out my status.

The D5, however, has large digits that I could easily follow. It’s able to use bold displays by limiting the information shown digitally at any given time.

At NEMO, I hadn’t really set the computer myself, so it was good to see how straight-forward and intuitive the D5 was to use.

Three buttons let you enter menus, scroll up and down, select, set and exit. It’s slick and quick to do.

This is important, because you might need to make some adjustments fast as part of your kitting-up process, or based on your pre-dive briefing.

For example, if the D5 is being used in Gas Integration mode, you might want to change the pressure at which it alerts you to tell a divemaster that you’ve reached a certain stage, perhaps a turnround point, in the dive. To upgrade the D5 to gas-integrated, you add the Tank POD.

This radio transmitter, which relays tank pressure from your first stage to the D5, has to be “paired” to your computer, so that it doesn’t pick up data from another diver’s computer.

The Tank POD with the D5 showing the POD assigned.

With more sophisticated Suunto computers aimed at technical divers, one unit can be linked to multiple PODs to enable the user to make gas-switches to air, nitrox and heliox for closed- and open-circuit diving, and still have the computer calculate gas durations for each cylinder and adjust deco for the gas breathed.

With the D5, you’re restricted to air and enriched air, but you can still pair it to as many as three PODs to handle dive and deco mixes.

The POD fits to a first-stage hp outlet. Fitting a transmitter directly into a first stage can be difficult because of other nearby hoses getting in the way, or the way you orientate your reg, but Suunto includes a short hose to provide additional clearance if needed.

I had two regulators on test and was able to fit the POD directly into the hp port on each without a problem, so didn’t need the short hose.

For the D5 to calculate gas time remaining in minutes, you need to tell it the volume of your cylinder. You should also enter your estimated surface air-consumption rate – the default is 25 litres per minute.  This could be a faff on a dive-boat when working against the clock to kit up, but is actually very quick and easy to do.

Similarly, you can quickly set your turnaround pressure or time, to alert you when you need to start heading back. It can also remind you to inform a divemaster when you’ve reached 100 bar, which is common practice.

A further alarm warns you when you hit the reserve pressure you’ve chosen, to help you avoid running out of gas altogether.

When equipped with the POD, the D5 continuously assesses tank-pressure drop, compares this to tank volume and estimates how long in minutes your gas supply will last. If your breathing rate alters, it quickly provides new estimates.

I very much like this feature for decompression dives, because it allows me to compare my total ascent time to my gas supply and ensure that gas-time remaining exceeds required stop-time. This allows me to plan deco on the fly.

The compass is basic – fine by me. You have to calibrate it at the dive-site, but this is straightforward and quick. You can then point it in the direction you want to go and instruct the D5 to memorise that bearing. You can set only one bearing, not a series of waypoints as with more expensive models, or, if you’re a bit of a meanderer like me, point it towards shore, at which point it shows you the way back!

When you use the digital-compass read-out, it shows your actual heading and, as you turn onto the memorised bearing, highlights it.

Arrows indicate which way to turn to get on track. It’s much the same as turning a normal dive-compass, so feels very familiar. 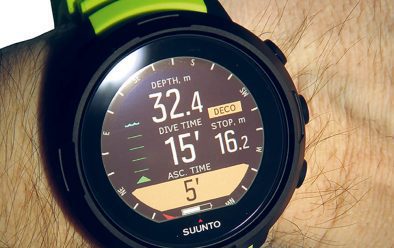 There’s also a compass rose that makes up the outer display when activated. Again, this is instantly familiar if you’re accustomed to a carded compass.

The D5 has what Suunto calls a “switch window”, an alternating information display set at the bottom of the screen. Pressing a button toggles which information is shown.

This can display, for example, your air pressure or estimated gas-time remaining, or be switched to indicate direction of travel.

I prefer digital read-outs to graphics, so tended to flick through the displays, checking air pressure every so often, while mostly keeping the compass heading on as I was navigating back to shore over a featureless sandy bottom.

All key information such as air remaining is still simultaneously displayed, but relegated to a graphic representation around the perimeter of the D5. It does mean making sure that you have the right display on when showing someone else your gas pressure.

The alternative, which I’m glad Suunto chose not to do, is to cram so much information into a small screen that displays become difficult to see and read-outs so crowded that they become easy to misinterpret. You can further customise how displays are presented using Suunto’s free Dive Manager software.

The screen is always illuminated, with a choice of brightness levels. Whether I swam into a dark wreck, dived at night or decompressed in sunlit shallows, the D5 was always easy to read.

There was none of that trying to angle the screen to prevent glare.

I dived the D5 on either air or single-mix nitrox, and made several decompression dives with it, representative of the kind of recreational diving I regularly do. But for those moving towards using stage cylinders for accelerated deco, the D5 can evolve with them.

The settings for choosing up to three air or nitrox mixes are well protected in the menus, so are very unlikely to be set by accident, but once you understand the procedure they’re simple to locate and change.

There is an option to change the breathing mix under water from those you originally set on the surface. This is to allow you to go onto another diver’s gas in an emergency and still decompress correctly without resorting to tables.

During ascent, you’re prompted to switch breathing mixes as you reach the correct depth and, if using PODs, gas-time remaining will be recalculated as you begin breathing from each new tank.

Being linked by radio the POD is a good contender for photo- and videographers, because it can be mounted easily on your housing, keeping all essential dive information where you can see it. This applies even while shooting using a monitor, or with just a sideways glance if using a viewfinder.

This overcomes the trap into which I’ve sometimes fallen, of being unwilling to let go of my camera to reach for and check gauges while shooting.

One further safety feature that deserves mention is the built-in vibration alarm. At NEMO I had not felt able to test this properly but in Gib, where I was testing several computers at once, I was watching another unit attentively as the D5 slipped into deco. I became aware of a pulsing on my wrist as it let me know my dive status.

Most dive-computers are passive and rely on you watching – it’s all too easy to be distracted and get a nasty surprise when you find out that you now have unplanned stops to complete, and less gas to do them with than you’d like.

Audible alarms rarely work for me, especially when swimming hard against current, where bubble noise can drown them out.

The vibration alarm isn’t going to work through a suit sleeve but, when worn on your bare wrist, it’s a fantastic back-up.

The D5 is a very capable and user-friendly dive-computer for beginner recreational diving through to entry-level tech and deco-diving on nitrox. Adding the POD increases the D5’s abilities considerably.

In this respect this computer, taking into account its Gauge and Freediving modes, and that it also functions as a watch, could be a first and last buy for many divers, because it can evolve to cover future needs. Highly recommended.