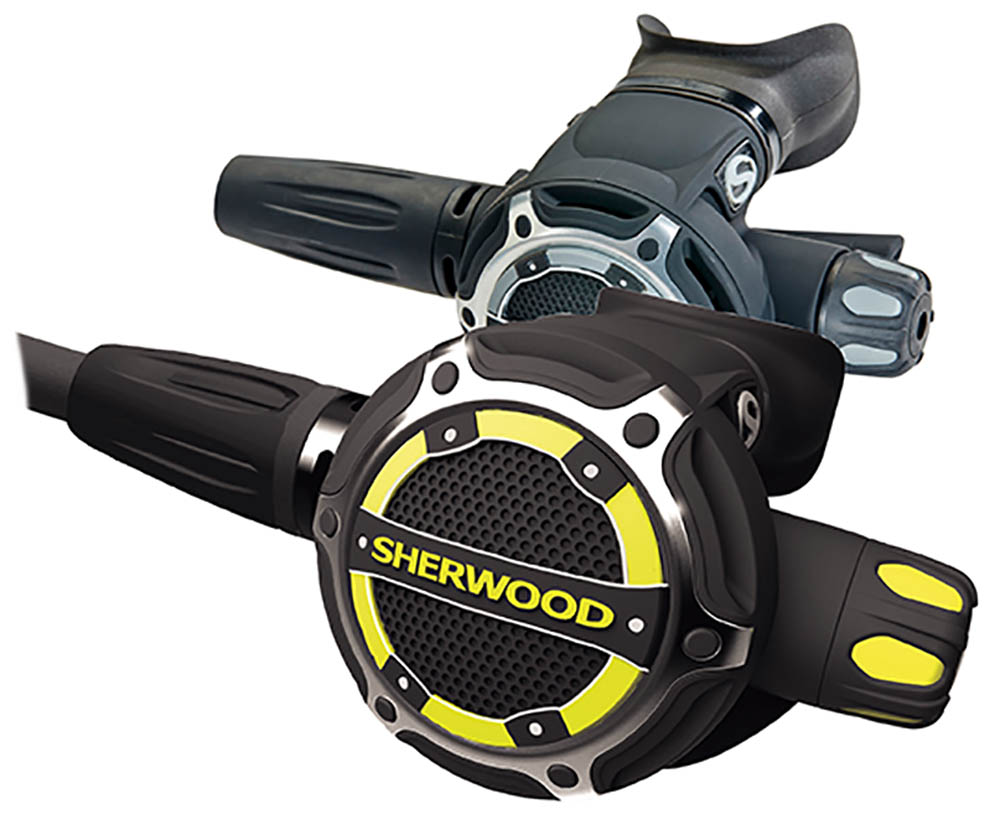 Sherwood goes back a long way.

It evolved from a division of a huge North American industrial gas control engineering company founded in the 1930s, so draws on long experience of making gas-supply regulators.

In its early years, Sherwood also made regulators to order for other scuba brands. But, despite its legacy, in the UK it has struggled to become a big player. By my count, the line has had at least seven distributors.

This year, Sherwood teamed up with Midland Diving Equipment. MDE has been in business since the 1950s and has built up some famous marques, the best known of which was Aqua Lung.

In the 1970s it was UK importer for US Divers, Aqua Lung’s North American subsidiary, and in the ‘90s took over distribution of Aqua Lung ranges Seaquest, Spirotechnique and Technisub.

These industry shake-ups occur periodically as manufacturers are bought and sold, and Sherwood is just one brand in the new portfolio of MDE, which is also a manufacturer, known for its cylinder-valve systems.

The SR2, Sherwood’s top-of-the-line regulator, was favourably reviewed in divEr in 2013 by Nigel Wade. However, an important development, the implementation of the updated CE EN250A standard for certifying regulators, makes it worth another look.

This standard addresses concerns over octopus use and certifies a regulator’s ability to deliver fairly large masses of air to two divers breathing hard, simultaneously, at a depth of 30m. 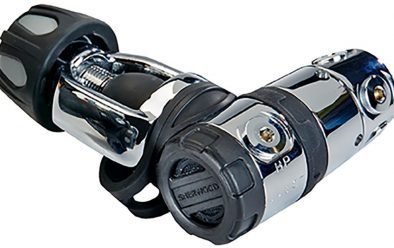 Sherwood is committed to piston-type first stages. The SR2 piston is balanced, so is largely unaffected by the reduction in tank pressure between the start and end of your dive.

An unbalanced design tends to increase breathing resistance as you drop below 50 bar or so, and might not be suitable for use with 300-bar cylinders.

Balanced-piston regulators are associated with easy breathing, even under high demand, such as when diving deep and swimming into current.

Piston designs are less complicated and have fewer parts than balanced-diaphragm first stages, so servicing can cost less.

Traditional piston first stages required water to enter the mechanism for the piston to sense alterations in pressure during changes in depth.

This made the piston, spring and O-rings vulnerable to degradation from contaminants in the water such as salt and silt and, in cold conditions, icing was also a concern.

Sherwood, which has many regulator design improvements to its credit, originally surrounded the piston and spring within an air-pocket. Air leaked into this chamber and pushed against a small non-return valve that was exposed to the surrounding water pressure.

The water outside tried to keep it closed against the rising pressure trying to escape through the valve from the inside of the first stage. In this way, the piston detected the correct pressure and Sherwood kept the chamber that enclosed the piston and spring dry, combining the robustness and anti-freezing properties of diaphragm first stages with the simplicity of a piston mechanism.

This older Sherwood positive-pressure seal was innovative and effective but involved a tiny trail of bubbles that confused divemasters who weren’t in the know, and irritated photographers who didn’t like to see their models fizzing.

The SR2 retains the isolated piston and is still surrounded by air, but it is a modern, leak-free version.

It’s CE rated for diving in water as cold as 4°C. 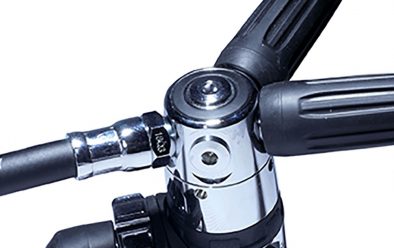 Configuring hose layout to your preference is easy. There is a high-pressure port on each side, so a pressure-gauge hose can run over or under your left or right arm. If you use a transmitter and want a back-up gauge, you can.

Four mp ports are arranged on a swivelling collar, with a fifth outlet on the end of the first stage.

In theory, the end port might yield the greatest ease of breathing, because the air flows straight through the piston and into the hose to the second stage, rather than turning corners as it does to enter the side ports.

A hi-flex hose links the first and second stages. It lets you coil up the SR2 so that it takes up minimal space for travel and storage.

The technopolymer second stage is lightweight, compact and pneumatically balanced. The latter feature makes inhalation a little easier than with unbalanced mechanisms.

When you begin your inhalation, you first have to crack open the second stage, which means pulling open the valve that closes off the air supply from the tank with lung power. Without this valve, your regulator would constantly freeflow. A spring is used to keep the valve closed, its default position.

The valve is like a spring-loaded door, and the stronger the spring, the harder you have to pull to open it. An unbalanced second stage needs to use a stronger spring than a balanced version, so cracking effort can be a little higher.

Sherwood uses balanced second stages throughout its range, including the budget Brut Pro that I reviewed a year ago.

Once you crack the valve and get the air flowing, the venturi takes over and does most of the work of breathing for you.

The SR2 second stage has a single control that allows the user to increase breathing effort by simultaneously stiffening the cracking effort and reducing venturi performance.

The rationale for detuning a high-performance regulator to make it breathe harder is mostly to prevent freeflows when facing into current.

I’ve done a lot of that, ridden a few DPVs and never needed to dial down a reg. Mike Ward and I both advocate setting any regulator for the easiest possible breathing performance.

I ran a pressure-gauge off one hp port and a transmitter off the other. I fitted the primary and safe second stages and my BC hoses to the swivel turret. I didn’t use the end outlet.

The all-metal DIN handwheel is poorly thought through. It’s very hard to undo with wet hands to take it off your cylinder. You can get a slightly better grip if you remove the dust-cap, but it really needs a non-slip finish. 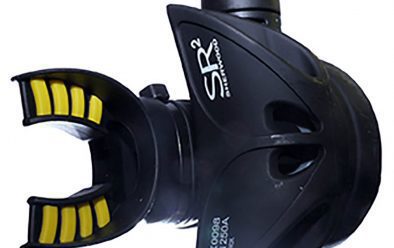 The SR2 second stage is near-neutral under water and, even on long dives, I was largely unaware of it. There was no restriction when I turned my head.

The low-profile second stage is good for photographers needing to get their eye close to their camera viewfinder.

The soft purge is easily used with gloves, though a simple exhalation is just as effective. Put the second stage in upside-down by mistake in a sharing situation and you still get all the water out with a gentle exhalation.

The small exhaust T isn’t likely to dislodge your mask either, and does a great job of diverting bubbles from your field of view.

The SR2 is an easy breathe – virtually a given these days, even with budget regs – but how would it perform when simulating emergency sharing?

CE standards for diving regulators set minimum performance criteria for ease of breathing. The original EN250 rating specifies the mass of air the regulator must supply to a single diver at a depth of 50m, and how hard that diver must inhale and exhale to breathe from the reg – the work of breathing.

This is tested using a breathing machine that takes 25 breaths per minute, with the volume of each breath set at 2.5 litres. At 50m, the mass of gas that must be shifted in and out of the artificial lung every 60 seconds is 375 litres.

Experts I’ve asked regard this as a moderately high demand for air, so a hard-working diver might well exceed it.

EN250 should not therefore be seen as a cast-iron guarantee that a regulator carrying its approval can’t be outbreathed.

Nor does EN250 certification tell you by how much a regulator might have surpassed the work-of-breathing test. All regulators must pass EN250 to be sold legally.

For decades, octopus rigs have been standard issue for recreational diving, but until EN250A was introduced, there was no real guide to how a regulator would perform with two divers breathing heavily from a single first stage feeding two second stages.

EN250A tests work of breathing with the depth limit reduced to 30m. The regulator must supply a mass of air of 500 litres per minute, at which breathing rate a full 200 bar 12-litre tank gives you less than five minutes to sort your life out.

That’s why I conduct these tests with the test reg on a stage cylinder. I take safety on these tests seriously.

Dennis Santos, former Diving Officer of the Gibraltar SAC and a veteran of 50 years’ sport, light commercial and Navy diving, and my own diving mentor, was my buddy on the SR2 test.

We descended to 32m and settled in to fin as hard as we could against some rocks, which quickly gets your breathing rate up. It’s highly subjective, because I’m trying to detect breathing resistance from the test reg as I start working, then figure out whether, when my buddy comes onto the octopus and gets his breathing rate to soar, I can detect a decrease in ease of breathing.

This test typically takes around two minutes to complete. It’s exhausting, because your own physiology is working against you, causing CO2 to build up and breathing to become laboured.

However, while I can’t determine work of breathing as a machine does, I can say that the reg was passing at least 500 litres per minute at maximum load.

I couldn’t detect any increase in breathing resistance, although Dennis felt that, momentarily, there was a stutter in the air-flow to the octopus. I have no explanation for this.

This is a nice regulator. It’s workmanlike and comfortable, and you can’t fault the ease of breathing. Recommended.