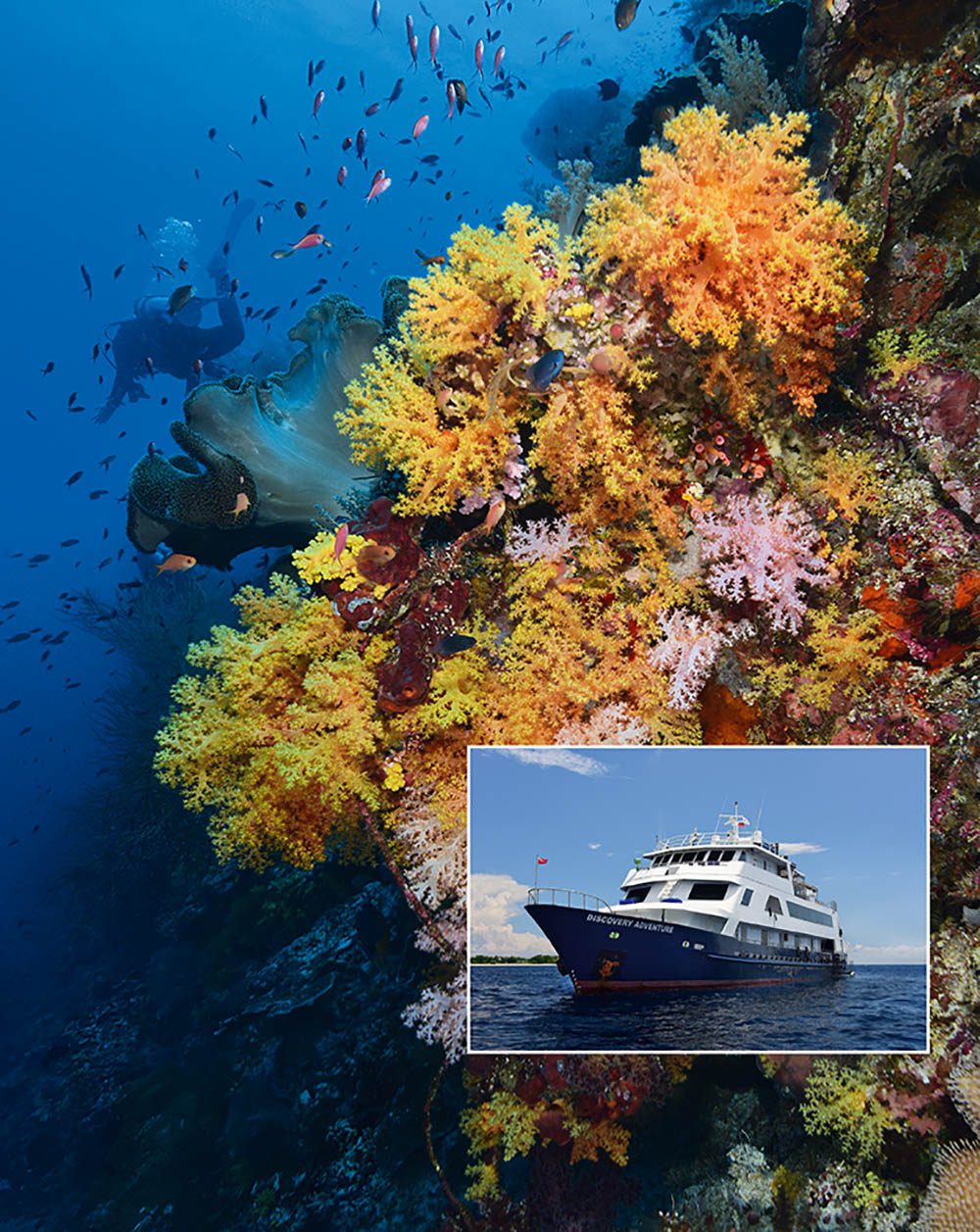 The reef was healthy. In fact, it was exquisitely healthy. Hard and soft corals crowded each other for space, while clouds of anthias coloured orange, red, purple and lime-green fluttered a few feet above.

Near the top of the drop-off, we had just encountered a dense school of trevally, swirling in a veritable tornado of fish, and now we were once again drifting at the precipice of the wall below.

Our eyes turned to the deep, and we began to descend. Whip corals, gorgonians and massive barrel sponges festooned the wall, and at depth the anthias were replaced with swarms of pyramid butterflyfish and redtooth triggerfish, all fluttering peacefully in the open water until something big swam by – which caused a mass rush to the safe confines of the reef-wall. 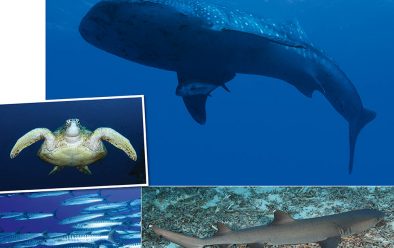 Above, clockwise from top:; A whale shark cruises along the wall; whitetip reef shark resting on the bottom; striped barracuda on the prowl; turtles are often seen on the reefs.

This was Tubbataha… something big was often noted swimming by!

As we drifted deeper, our attention was suddenly fixed on a set of white dots barely visible in the gloom of the deep. We squinted and strained until, gradually, a massive form emerged from the edge of visibility and appeared in all its glory: a whale shark! No, two! No, hang on… is that a third?

Tubbataha is a collection of three coral atolls that barely reach the surface in a stretch of water in the Sulu Sea, the geographical centre of world marine biodiversity.

Lying more than 90 miles south-east of Puerto Princesa in the Philippines province of Palawan, Tubbataha Reefs National Park is a 375sq mile Marine Protected Area reachable only by liveaboard, and only at certain times of the year.

The North Atoll, South Atoll and Jessie Beazley Reef that make up Tubbataha are a World Heritage Site and a magnet for scuba divers.

Our journey to Tubbataha was aboard the comfortable Discovery Adventure liveaboard. The itinerary would take us first to Tubbataha before a visit to a little-known dive-site in Cayuan and a stop at Apo Reef before returning to port in Puerto Galera (another story).

The sighting of three whale sharks cruising the wall at the Staghorn Point site on the South Atoll occurred on our first day of diving in Tubbataha. Subsequent dives were equally electric, so much so that we almost became inured to the beautiful reefs and dynamic marine eco-systems that lay before our eyes on each dive. But not quite… 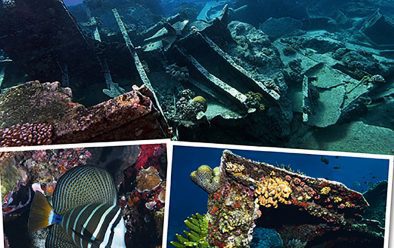 Top & right: Divers explore a shallow wreck. Above left: The Pacific sailfin tang is a striking resident of the reefs.

Along with the whale sharks we saw schools of trevally and striped barracuda at Staghorn Point. We also dived at a site known as Delsan Wreck, although the wreck itself is not part of the dive, because it sits in water too shallow for a safe approach.

A sheer wall drops off from a lush reef teeming with colourful Indo-Pacific reef fish. On one dive, a group of bumphead parrotfish cruised by, preoccupied by their search for food and unconcerned about the group of divers in their midst.

Schools of Moorish idols flitted over the reef at Black Rock, in the northern part of the South Atoll. We also found anemones with resident anemonefish nervously cavorting in their tentacles.

Strong currents are always a possibility at Tubbataha. Most of our dives were drifts carried out at varying levels of speed. The dive-guides are well-schooled in the vagaries of the water movement, and we hardly ever faced a dive into the current, nor were we ever confronted by a current too strong for our safety.

Still, currents can change in moments; they can be confusingly inconsistent from one depth to another, and down-currents are an ever-present danger, especially when diving close to the wall.

Proper experience provides greater comfort and proficiency in these conditions, and an SMB is a must.

On the North Atoll, we dived sites such as South Park, Shark Airport, Seafan Alley and the ominously named Washing Machine. We frequently came across whitetip reef sharks resting in the coral plains, but in the blue water off the walls we encountered silvertip and silky sharks on several dives.

One of our objectives was to dive with manta rays but we failed to see any, although another group on the boat did, when they hit the water at the Malayan Wreck. We were sceptical at first, but their video evidence proved us wrong!

Tubbataha is known for its very healthy reefs and big animal action.

It is best photographed using wide-angle equipment, but divers who thirst for macro experiences can delight in the intricate reef systems that hold so much small life to be photographed. 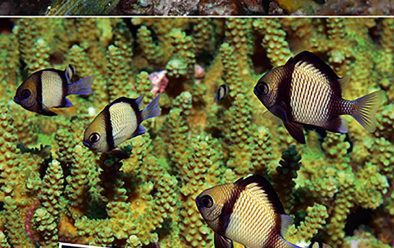 Above, from top: The smaller residents – a group of dorid nudibranchs; small fish such as these cardinalfish take shelter in the branching corals; whip gobies can be found on the gorgonians and wire corals.

Just be aware that as you focus on the small stuff, big animals will undoubtedly be around too.

The name Tubbataha comes from the Samal language and means “long reef exposed at low tide”. Positioned in the middle of the Sulu Sea far from habitable land, the isolation of this reef system was, for many years, its best protection.

Only a few very tiny islets poke ever so slightly above the waves, and there is no protection from the typhoons associated with the north-east monsoon between November and March, and the south-west monsoon between July and October.

In the 1980s increasing numbers of Filipino fishermen using motorised boats began to threaten the health of the reefs with their dynamite and cyanide fishing, which began in earnest as the abundance of fish became well-known.

It was President Corazon Aquino who declared Tubbataha a National Marine Park, the first of its kind in the Philippines, in 1988. A model for conservation and protection was implemented and has gradually been improved over the years.

This model, which includes restricted access, ample time between visits, aggressive enforcement of regulations and very strict requirements on all visitors, including divers, is one that has shown success, and should be emulated the world over.

Divers are among the most frequent visitors, and their actions are very carefully monitored. Dive-guides can be heavily fined or even prohibited from working in the park if the divers they escort so much as touch the coral or harass any of the marine life. Good buoyancy skills are essential.

Our journey included a visit to the North Atoll ranger station, where we glimpsed what life is like for the dedicated individuals working to protect Tubbataha.

A team of 10-12 men from the Navy, Coast Guard, Municipality of Cagayancillo and Tubbataha Management Office are stationed in a shelter for two months at a time to guard against illegal activities.

Equipped with radar, motor-boats and other equipment they carry out regular patrols and confront unauthorised visitors. It’s a vital role.

We met Angelique Songco, referred to by her colleagues as “Mama Ranger” and Tubbataha’s Park Manager since 2001.

We thanked her and the rangers for the hardships they endure on behalf of the reef. Their work has paid off – Tubbataha has some of the world’s healthiest reefs.

Discovery Adventure left Tubbataha as the sun set behind a flat horizon. and we set off on the 15-hour journey to Cayuan.

But the sensational reefs of Tubbbataha had got into our blood. This expedition was the last of the season, and we knew that in the coming weeks the waters would turn rough and storms would rake over Tubbataha with unrelenting fury.

But the knowledge that this area of ocean would remain undisturbed for nine months now made us smile.

It’s a chance for Tubbataha to breathe, to regenerate and to exist as all the reefs of the world once did: healthy, in balance and teeming with life.

GETTING THERE> The only way to dive Tubbataha is by liveaboard, and most depart from the port city of Puerta Princesa on Palawan. Philippines Air Express flies domestic routes from Manila.

DIVING & ACCOMMODATION> The Filipino-owned 47m Discovery Adventure, built in 1987, offers “divers only” cruises to Tubbataha. It carries up to 30 divers in 13 cabins, discoveryfleet.com

WHEN TO GO> The dive season at Tubbataha runs from March through June.

PRICES> Return flights from £500. A seven-day, six-night trip to Tubbataha on Discovery Adventure costs from US $2450pp.