If you enjoyed Will Appleyard’s recent Frozen In Time features about diving Baltic wrecks, here’s a coda to those adventures, as he takes time out to explore the former Soviet prison of Rummu in Estonia 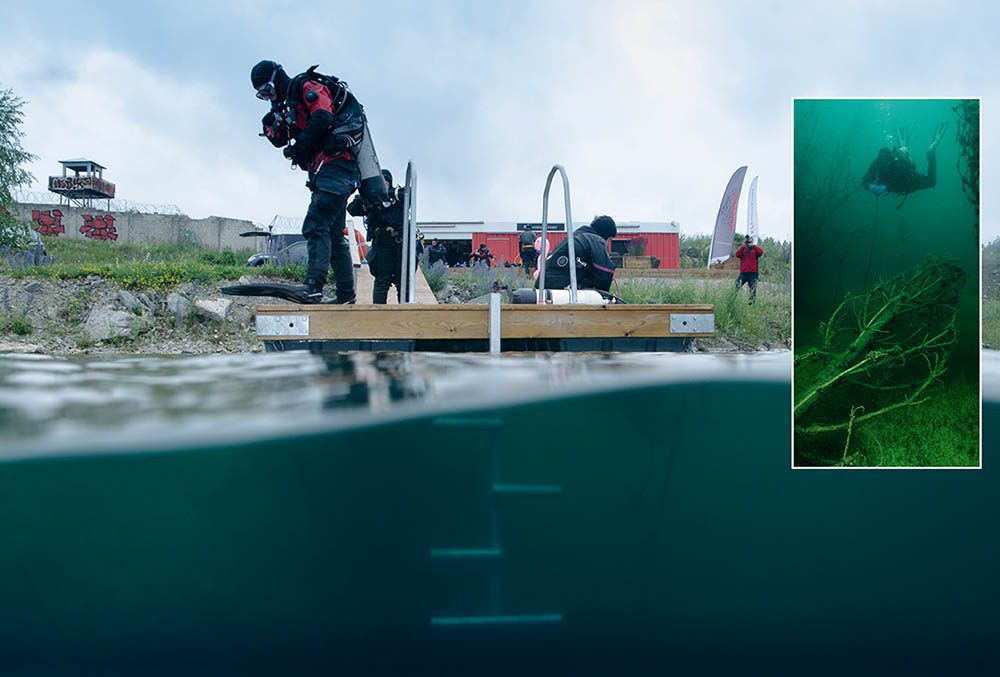 Divers’ entry-point from the jetty, with the prison wall and watchtower behind. Inset: Entering the Forest.

Who would have thought that the words “fun” and “Soviet prison” could be used together in the same sentence?

Like a spoilt child, I’m almost reluctant to share this unique diving destination with you. It’s way too much fun, and as a result is likely to become over-run by Instagram “influencers” and YouTubers at any time, opening the site to divers the world over.

The moody grey sky is threatening rain as we arrive at the gates of Rummu prison, which intensifies the gloomy look of this now-defunct Soviet facility.

The barbed wire, concrete walls and watchtowers are still in place as we slowly drive down a bumpy track alongside the prison wall, passing a huge spoil-heap to arrive beside the quarry.

I like this place – it has adventure written all over it, and I’m not talking about the graffiti on the outer walls. 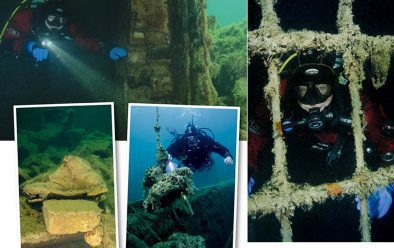 Rummu housed inmates destined for a life, or at least a prison sentence, of hard labour. During the Soviet era (pre-1991) they would be put to work at its in-house limestone quarry.

Both Rummu and its next-door neighbour, the equally macabre-looking Murru prison, closed for good in 2012. Later, we were to take a dry tour around Murru’s maximum-security units and miscellaneous buildings.

But as divers we were more interested initially in Rummu, where many of the quarry workings and utility buildings were submerged as spring water rose to the brim once the pumps had been shut off.

Until recently scuba-divers, snorkellers and swimmers entered the facility but only unofficially.

However today a small dive, kayak and stand-up paddleboard centre operates from a well-equipped container at one end of the vast quarry lake.

A jetty has replaced the slippery entry point and, after assembling my equipment and absorbing the dive-guide’s briefing, I walk to the end to peek into the invitingly clear water.

I decide that it’s wise to take a guide, at least for the first dive here, because there is so much to see and local knowledge will get me to the best stuff with no navigational nonsense.

With additional diving commitments to take care of this weekend in Estonia, we have time for only one dive at Rummu, so decide to make it a long one, electing to take 15-litre tanks and eke what we can from them.

It’s a shallow dive-site, with no more than about 12m at our deepest point, so we calculate that we can all manage a good 80-90 minutes under water.

I’m in the water first, probably more excited about this dive than any other of the year. I’ve piled on the lead, too, knowing that at times we’ll be diving only 3-4m below the surface.

Although we’re wearing our drysuits it’s warm – 20° at the surface in June during our visit.

What if we dived in late summer? Our guide Daniel tells me that the water temperature reaches a tropical 27°C!

With all divers down, we follow Daniel towards “the Forest”, one of many points of interest we’ve been told about in the briefing. The Forest is a place I would not want to dive alone. It’s a ghostly section, the perfect backdrop to a disturbing dream. It’s an environment that changes visually as the sun makes intermittent appearances from the clouds above before disappearing again like a special effect.

The quarry floor is covered in light sand and green patches of weed and then gives way to huge “ponds” of green mist, not unlike the gases found at the bottom of Cenote Angelita in Mexico.

At the base of certain trees, a grey Halloween-style wispy mist trails from their stumps, hovering just above the floor in mid-“air”. I’m already pleasantly freaked out.

Arriving at clearings in the Forest, I begin to notice signs of former prison life – an inmate’s boot here, a wheelbarrow there, tools and even some evidence of prisoners’ clothing.

Through the forest, Daniel brings us to our first encounter with a building. It’s unclear what purpose it served when in use, but a huge brick-framed window offers our team a great swim-through and an obvious photo-opportunity.

Lingering to frame a shot for too long, we lose Daniel. Has he finned off back into the green-hued Forest?

Perhaps not accustomed to the endless stop-start habits of underwater shooters, we’ll lose him on a few more occasions, yet he always manages to relocate us stragglers eventually.

A few fish shoal among the submerged trees – the usual quarry inhabitants, mainly perch. A lone pike also passes us as we leave the watery woodland and meet the prison wall, complete with lamps and barbed- and razor-wire.

We are able to “fly” over this brick wall, probably the stuff of many a dream for the former inmates.

Once on the other side, Daniel leads us into a network of utility buildings.

The silhouette of a barred window is cast on the concrete floor as we enter the first building. As my eyes adjust to the darkness, I can make out buckets, spades and more boots on the ground.

Regulator exhaust bubbles spread across the ceiling, forming a layer like liquid metal. Our torch-beams briefly illuminate peeling paintwork on the walls, as we move from room to room.

Losing most of the team again, we leave one structure and fin across to another, this time entering through a gap in a partially collapsed roof.

We make a lap of the room and exit at the same point, carefully avoiding snagging ourselves on exposed metal reinforcements.

Because of its shallow depth, it is possible simply to surface at the quarry, gather your visual bearings (if without a compass) and descend once again, but pride gets in the way of doing that, of course, so we plod on, ever-hopeful.

Daniel gathers us together after a few minutes of following divers who look as if they know where they’re going and beckons us towards the final point of interest within our now almost-90-minute-dive – “the Bomb Shelter”.

The dive-centre have given this name to the structure, unable to identify its purpose, but it’s entirely possible that it was used as some kind of blast refuge, with its robust metal tubular design and escape hatch at one end.

Or perhaps it was a place of punishment for those caught leaning on their spades?

I’m invited to lead the way in and, once inside this poky place, I note the light streaming down from the hatch and metal ladder at one end – my exit-point. It’s a tight-ish spot, perhaps 10m long and with no significant space to turn around.

The crawl out of the roof hatch is a snug one, and probably a space in which the cave-diving fraternity would enjoy hanging out.

I would normally be bored stiff diving most quarries, if not too cold after spending 90 minutes under water, yet here I simply don’t want to leave.

We’re the only divers in the water today, yet I expect during summer that the place could become quite busy. The Forest section is delicate, and the branches easily broken through poor buoyancy control.

And let’s hope that as Rummu becomes more widely known as a diving destination, the walls of the buildings remain free of divers’ scored initials and the obligatory knob drawings.

The quarry is enormous, and has yet more buildings to explore at the other end for those with more time. The centre has constructed a mobile dive platform with a small outboard engine to take divers to the other end, and I’ll certainly jump aboard that if and when I return to the prison for my second sentence.

Daniel makes a call to the owner of the neighbouring Murru prison and gives us a quick look inside – starting with the maximum security unit, for maximum effect. Many of the cells are still plastered with inmates’ posters, and some personal items remain on the shelves, including books and clothing.

Murru doesn’t feature as an official tour package, but if you’re visiting Rummu for a dive and ask nicely you never know – you might be invited inside Murru too.

easyJet flies from the UK to Tallinn from £30, with a 50min transfer to Rummu prison. The BALTACAR team arranged the dive through Barrakuuda Dive Club, barrakuuda.ee
A dive costs £60.
Visitor Information: rummu.eu/en