How to Live on Liveaboards

How to Live on Liveaboards

Everything you wanted to know but were afraid to ask: SIMON PRIDMORE tackles all aspects of a diver’s life at sea, from avoiding arguments and sea-sickness to underwater incontinence, complaints and the vexed question of tipping 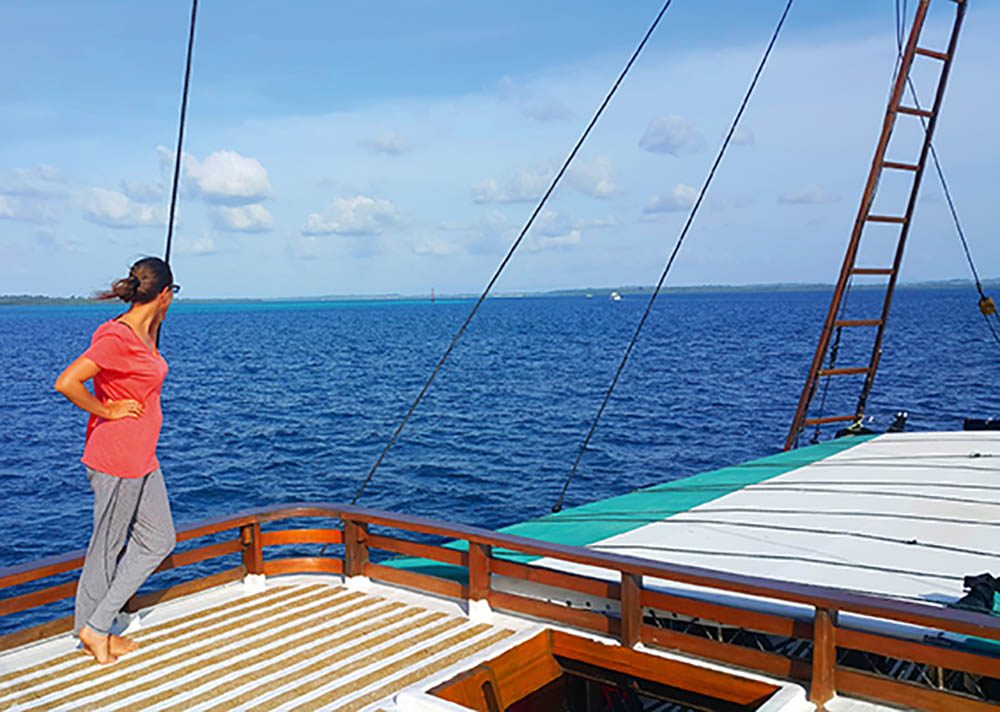 At home on the ocean.

A liveaboard dive-boat will take you to parts of the ocean that land-based operations cannot reach. If you are a diver and want to see the best diving the planet can offer, at some point in your diving life your thoughts will turn to booking a trip on one of these floating hotels.

For many people, the idea of spending a week or 10 days in a relatively confined space with a group of strangers is, understandably, cause for trepidation.

Joining a trip organised by your dive-club or making a booking with friends can mitigate these concerns, but however you arrange things, what contributes most to problem-free liveaboard diving is the informal code of etiquette that prevails on boats all over the world.

As you might imagine, this consists mainly of being unselfish, tolerant, patient and considerate of others, but you should be aware of a few specific dos and don’ts.

Everyone on board is a diver, which means that you all have at least one thing in common. Scuba-diving is very likely to be the focus of most conversations: the places you’ve dived, the dives you want to do, the animals you have seen and those you want to see.

The etiquette is that, should a topic arise that is not diving-related and might produce disagreement, the conversation should revert as quickly as possible to diving again. 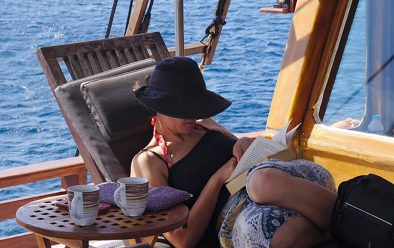 You can always find a quiet spot.

Many people who meet on dive liveaboards develop life-long friendships. However, just because you are all kindred spirits in one respect does not mean that you are expected to develop a close bond with all your fellow-divers.

Similarly, the etiquette does not require that you socialise all the time.

All long-haul liveaboards have plenty of space. There is always somewhere you can go for a little personal time: your cabin, the sun-deck or a corner of the lounge perhaps. Earbud-style headphones are a very useful device to ward off interruptions (even if unconnected).

You might worry about living on the ocean, getting seasick and being unable to get onto dry land to recover. Generally speaking, there is nothing to worry about.

It’s surprising how quickly you get used to the motion of a boat, and it’s easy to get out on deck and breathe some fresh sea air into your lungs when the closed areas of the boat start to feel stuffy.

Also, whenever possible, liveaboards will usually move through any rough water that’s around during the night, while you’re in bed, and moor somewhere sheltered during the day. The crew don’t want you to be sick any more than you do.

If you know you’re prone to sea-sickness, plan in advance rather than expecting the boat or your fellow-divers to come to your aid. Wearing a motion sickness patch under the ear is a solution that works for most people, even the particularly susceptible.

Fresh ginger, ginger tea and even ginger biscuits are good things to bring with you if you are usually OK on boats but fear that you might succumb if the ship starts to roll. Other people swear by fizzy drinks.

If you’re a photographer, you’ll be glad of dedicated camera rinse-buckets, camera rooms and camera tables, which are features of most liveaboards. You will be briefed on the etiquette regarding these when you come on board.

If you’re not a photographer, the etiquette can be summed up in two words: stay clear.

Rightly or wrongly, photographers are very sensitive about their equipment, and it’s all too easy to transgress and cause upset.

Non-photographers are certainly not second-class citizens on a liveaboard, but avoiding underwater camera-only spaces unless you have an underwater camera is an easy way to promote world peace.

If you’re a non-photographer, you might be encouraged to learn that the camera guys and girls usually spend a vast amount of time with their equipment in those photographer-only spaces, which means that you have a lot more choice of where to install yourself with your book or tablet elsewhere on the boat.

When you gotta go

The consequences of peeing in your wetsuit are greater on a liveaboard than on a day-boat. On a day-boat, your fellow divers are exposed only briefly to your odoriferous overwear. On a liveaboard, they have to live with it day after day.

This is why many liveaboards reduce the impact of smelly suits by having a rinse-tank dedicated to wetsuit washing, which contains fresh water diluted with antiseptic, detergent or some other strongly fragranced additive.

They also have a dedicated, well-ventilated space on deck for hanging suits between dives. 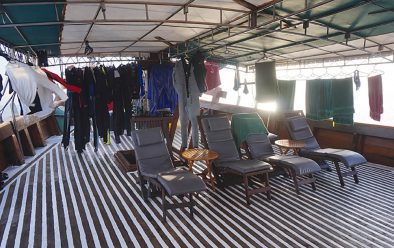 Most people pee in their suits. It’s fine. If you have to do it, do it. Don’t avoid pre-dive hydration just so that you don’t have to pee. Then, after the dive, dunk your suit in the rinse-tank to rinse the pee out and make it smell better, then hang it up with the others.

If you are one of those favoured few who never pees in their suit, however, avoid the wetsuit rinse-tank completely. After all, after the first suit has been dunked in it, the water therein contains a certain (albeit small) quantity of other people’s urine.

There is no etiquette that requires you to rinse your suit out after every dive.

Yes, salt damages neoprene but you will be diving three, four or five times a day, and salty spray blows over the dive-deck all the time. It will never really get dry.

Rinse it under the deck shower at the end of the trip and then give it a good soak in warm water when you get home.

I mentioned earlier that liveaboard etiquette involves being considerate to others. This obviously means that you should be on time for dives, meals and briefings and wary of offending other people’s political and religious views, but it also concerns the way you dive.

Prepare for a trip by getting dive-fit. Practise your skills in a pool, or dive locally before the trip if you can.

Ensure that your equipment is in good shape and functioning properly. This reduces the likelihood that you will hold up the group by forgetting how to do something, or having an equipment failure.

Then, during your trip, it’s important to dive conservatively – not only out of concern for yourself because you’re on a liveaboard, concern for others too.

If you have a dive injury on a liveaboard, anything but very basic medical assistance can be a long distance and time away.

Even with the best insurance in the world, in 99% of the places in which you’ll be diving, the concept that, if you get bent, a helicopter will be scrambled to whisk you off your dive-boat and carry you away to a top-class medical facility, while the other people on board carry on with their trip, is a complete fantasy.

If you have a problem, usually the only thing the boat can do is head for the nearest port that has a hospital and, even then, you might be nowhere near anyone who has the requisite expertise or equipment to deal with decompression sickness.

So, such an event not only has a significant effect on your well-being, but also has an enormous impact on your fellow-divers, whose holiday is being ruined along with yours.

So, good liveaboard diving etiquette is to dive well within the limits, hydrate frequently, get plenty of rest and stay in good mental and physical shape.

Don’t take risks just because you’re on holiday. Operators all over the world never cease to be astonished by how divers who are the model of conservatism at home throw caution to the winds when they go on holiday.

“It’s as if they left their brain on the plane” is a common observation. (This applies to land-based resort diving too, of course.)

Tipping is an issue around which there is much debate and anxiety. Because of different cultural norms, there is no fixed etiquette regarding how much you should tip at the end of a liveaboard trip, or even if you should tip at all.

The only tipping-related convention that is applied all over the world is that there is a tip-box and any tips received are shared among the whole crew, guides, waiters, cooks, engineers, tender drivers, everybody. All contribute to the success of your trip, not just the front-of-house staff.

So etiquette suggests that your tip should go not just to those members of the crew with whom you have established a friendship during the cruise.

This should be mentioned in your end-of-cruise briefing, after the last dive. If it is not, then ask to make sure.

Some boats seek unilaterally to establish a rule of etiquette regarding the size of your tip. They might specify that a certain figure or percentage of the price of your trip is “recommended”, “suggested”, or even “expected”.

Ignore this. If there is any etiquette at all in this area, it is that the amount you tip is an entirely personal decision. A good guideline to follow is to tip, in percentage terms, as you would in an upmarket restaurant in your home country in which you had received good service. (This assumes that you had a great trip, of course.)

A dive liveaboard is not the place to shout and scream in response to a perceived slight or failure on the part of the crew. If something happens, or doesn’t happen, as you would wish, etiquette dictates that, rather than erupt in indignation, you wait until you can have a quiet private word with someone in authority on board who can do something about the situation, and leave it with them to deal with.

Neither should you stay silent about something that has gone wrong. Like hotels, liveaboard operators hate it when a diver waits until after leaving the boat to complain in a review or email that the reading-light by their bed didn’t work, or that they kept getting low fills.

Shelve your trepidation, trust in the etiquette and give liveaboard-diving a try. You won’t regret it.