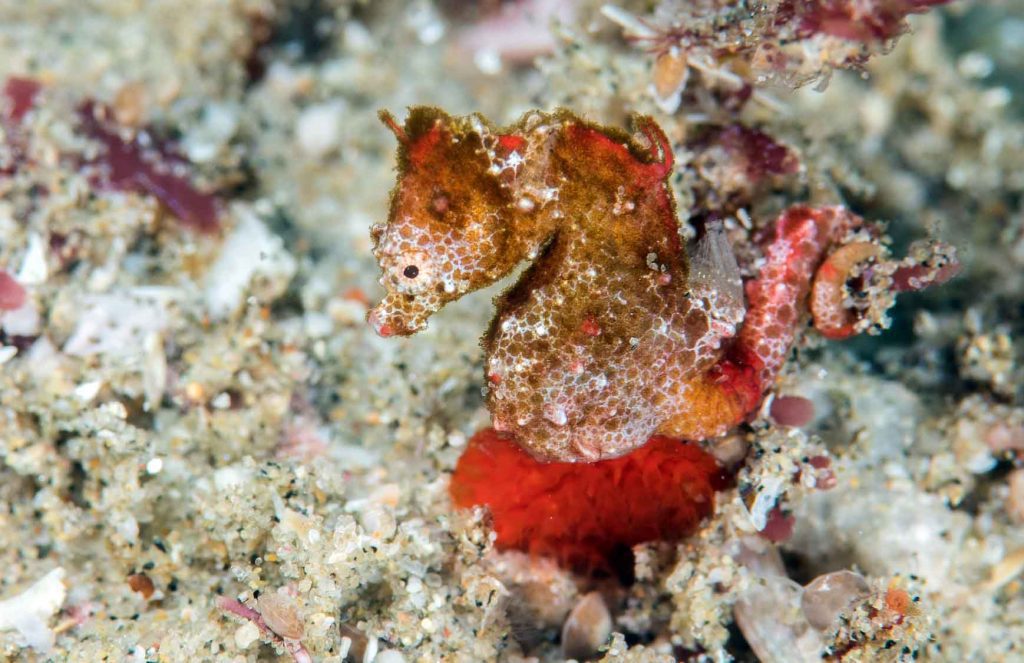 A tip-off from a South African diving instructor has led an international team of marine biologists to identify a new species – the first pygmy seahorse ever to be found in Africa.

Located in diving hotspot Sodwana Bay in Kwa-Zulu Natal, the tiny Hippocampus nalu is the first of its kind to be found anywhere in the Indian Ocean – and becomes the eighth species of pygmy seahorse to be described.

The other seven species, all but one of which were discovered this century, live thousands of miles away, mainly in South-east Asia.

Instructor Savanah Olivier was the first to notice and photograph the tiny, well-camouflaged fish during her dives. When Drs Louw Claassens and Dave Harasti arrived in the area in early 2018 in search of pygmy pipehorses, they were surprised when Olivier showed them her seahorse pictures.

Guided by Olivier, who had not seen the pygmy seahorses for some months, the divers were eventually able to find a pair, a pregnant male and a female, on a rocky reef 15m down.

The two seahorses were grasping fronds of microscopic algae in what was described as a “raging surge” that was effectively “sandblasting” them. The regular swells on the South African coast contrast with the sheltered coral reef habitats often favoured by Asian pygmy seahorses, and the divers reported nearly losing them in the rough conditions.

Dr Smith described the discovery as “equivalent to finding a kangaroo in Norway” and, after finding a dark-coloured 1cm juvenile on a later dive, he concluded that there was likely to be a breeding population in the area.

The new species is thought to grow to just over 2cm – the biggest-known pygmy seahorse to date has measured 2.7cm – and is honey-brown overlaid with a white net pattern and a pinkish tail. It has a short snout and a thick neck with protruding filaments.

Underlying distinctions between the African and more familiar Asian species were established through examination by other international experts. Researcher Graham Short compared them using a microscope and CT scanner, while Mike Stat carried out genetic analyses.

The team, which also included Maarten De Brauwer and Healy Hamilton, were able to confirm the Sodwana pygmy seahorse as a new species and give it the scientific name Hippocampus nalu.

The word “nalu” has three layers of meaning – it translates as “here it is” in the local Xhosa and Zulu languages, indicating that it had been present but unseen all along, and “surging surf” in Hawaiian, reflecting its wild habitat. It is also the middle name of Savanah Olivier.

The team believe that many other cryptic species exist in the western Indian Ocean, and say that with those such as the pygmy seahorse being highly vulnerable to human impact and overfishing, more research funding is needed to prevent them being wiped out before they are even discovered. “This should be a call to action for all divers – new discoveries might just be lurking around the next reef,” said Dr Claassens.

The findings are published in the scientific journal ZooKeys and a 16-minute film about the original dives called ‘Discovering the South African Pygmy Seahorse’ can be seen here.

Richard Smith is set to deliver a presentation at the next NEC Birmingham Dive Show.