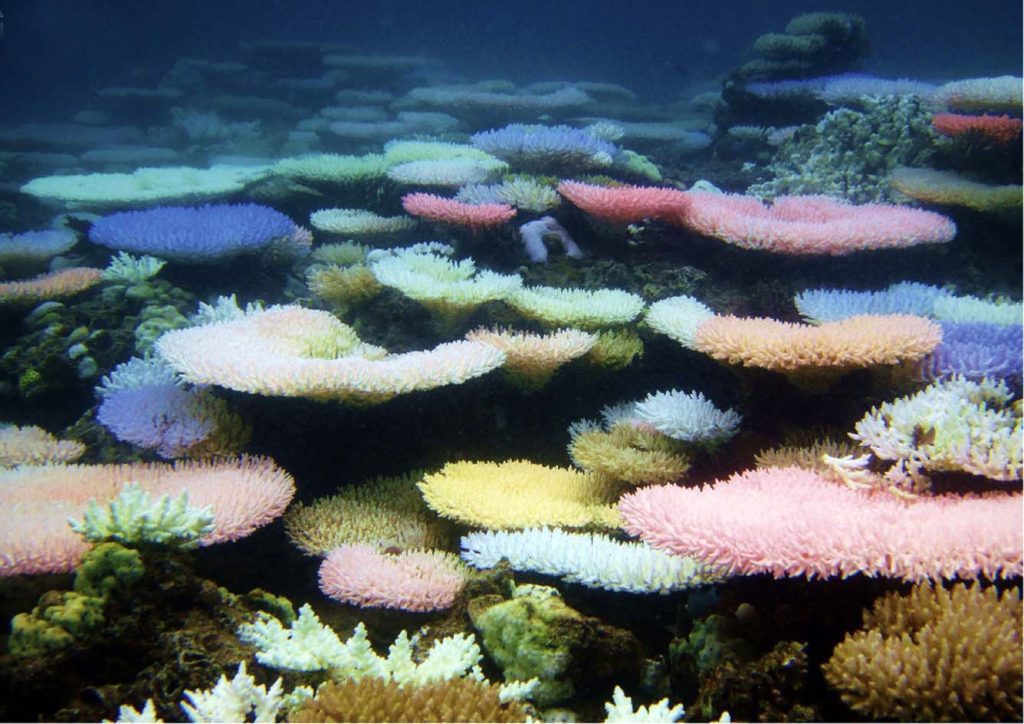 Scuba divers might have noticed that instead of bleaching white in response to ocean warming, some corals put on a dazzling rainbow display of colours. Now scientists from Southampton University believe they have discovered how and why.

Their research indicates that the phenomenon is a sign that the corals are putting up a fight to survive – and stand a chance of succeeding.

Corals carry symbiotic algae embedded in their cells, but a temperature rise of 1˚C above the usual summer maximum can be enough to break down that relationship. If the algae leave, the coral’s white limestone skeleton shines through its transparent tissue and the coral can die because that tissue is no longer protected.

The mystery was why some corals emit a multi-coloured glow instead of bleaching white. Researchers at the university’s Coral Reef Laboratory conducted a series of experiments in their aquarium facility, and found that these corals were producing their own “sunscreen layer”, designed to encourage the protective algae to return.

“In healthy corals, much of the sunlight is taken up by the photosynthetic pigments of the algal symbionts. When corals lose their symbionts, the excess light travels back and forth inside the animal tissue – reflected by the white coral skeleton.

“This increased internal light level is very stressful for the symbionts and may delay or even prevent their return after conditions return to normal.

“However, if the coral cells can still carry out at least some of their normal functions, despite the environmental stress that caused bleaching, the increased internal light levels will boost the production of colourful, photo-protective pigments.

“The resulting sunscreen layer will subsequently promote the return of the symbionts. As the recovering algal population starts taking up the light for their photosynthesis again, the light levels inside the coral will drop and the coral cells will lower the production of the colourful pigments to their normal level.”

The researchers believe that the corals that undergo colourful bleaching will have experienced mild or brief ocean-warming disturbances rather than extreme events. And they say they are encouraged by recent reports suggesting that the phenomenon occurred in parts of Australia’s Great Barrier Reef in the recent mass-bleaching event of March and April, because it offers hope that these have increased prospects of recovery.

However, the scientists emphasise that only a significant global reduction of greenhouse gases and sustained regional  improvement in water quality can save coral reefs beyond the 21st century.

Their research is published in Current Biology.