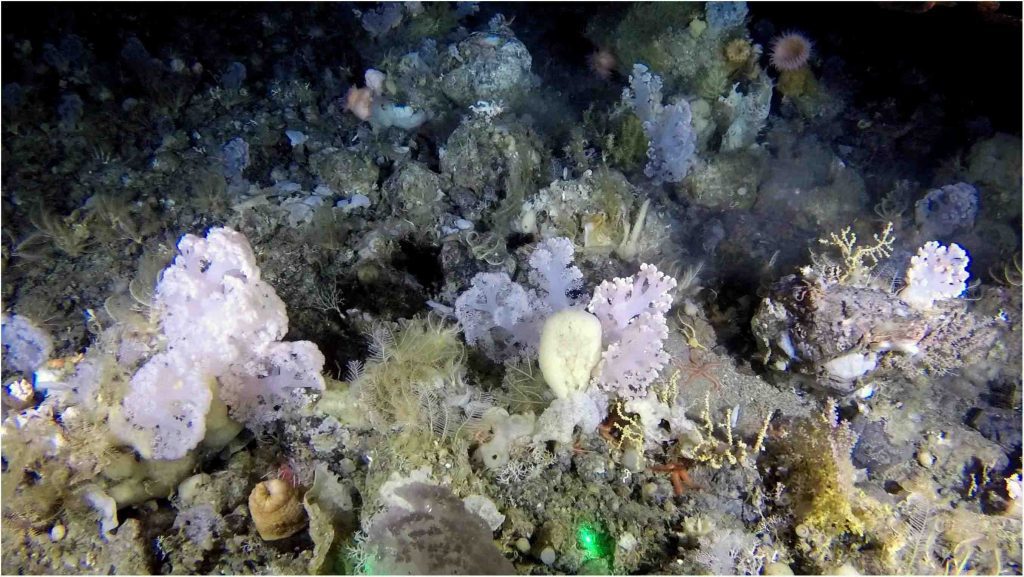 Soft-coral gardens have been found at depths beyond 500m off western Greenland, the first habitat of its kind to have been identified in this part of the North Atlantic – and they were revealed by scientists from the UK and Greenland using a GoPro.

The researchers behind the discovery are based at University College London, Zoological Society London and the Greenland Institute of Natural Resources.

“The deep sea is often overlooked in terms of exploration,” said UCL doctorate student Stephen Long, first author of the just-published study. “In fact we have better maps of the surface of Mars than we do of the deep sea.”

Used to add a sense of scale to the imagery, the lasers consisted of high-powered green pointers mounted in housings made at UCL.

The video-sledge, about the size of a Mini Cooper, was lowered to the seabed for 15-minute periods across 18 sites. More than 1200 stills were taken from the footage for detailed analysis.

The video-sledge has proved to be resilient.

“So far the team has managed to reach an impressive depth of 1500m,” said Long. “It has worked remarkably well and led to interest from researchers in other parts of the world… The development of a low-cost tool that can withstand deep-sea environments opens up new possibilities for our understanding and management of marine ecosystems.”

Now the researchers hope that a 188sq mile area off Greenland will be recognised as a Vulnerable Marine Ecosystem under UN guidelines to protect it from deep-sea trawl fisheries operating nearby.

“We’ll be working with the Greenland government and fishing industry to ensure that this fragile, complex and beautiful habitat is protected,” said Long.