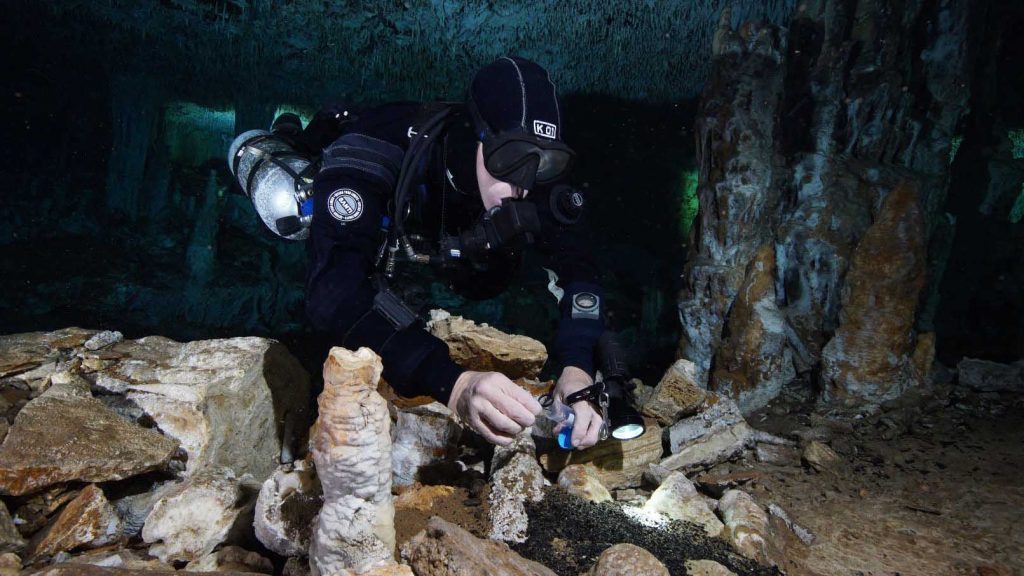 Cave-divers have discovered a red-ochre mine in a cave system on Mexico’s Yucatan peninsula – and learnt that it was worked between 12,000 and 10,000 years ago, making it the oldest-known such mine in the Americas.

The system of cenotes and underwater passages in Quintana Roo lies 5-6 miles from the Caribbean coast, though its exact location is being kept secret. It was found three years ago but the research team have only now released their study of the previously unsuspected prehistoric mine, preserved just as it was left by the last miners.

Red ochre has been the most commonly identified inorganic paint used through history worldwide. No evidence of how the early miners used it is thought likely to survive at the site, but they could have valued it as a medium for rock-painting or body decoration, tanning animal skins or, with its high arsenic content, as an insect repellant.

Ten skeletons dating back to the same Pleistocene-Holocene period have been found to date in Quintana Roo’s flooded cave systems, and experts had until now supposed that the people had sought water or shelter in the then-dry caves. Now it seems that these early explorers had another reason to head underground.

The “La Mina” site was discovered by cave-divers Sam Meacham and Fred Devos from CINDAQ (Research Centre of the Quintana Roo Aquifer System), later joined by Eduard Reinhardt from McMaster University in Canada. Underwater archaeologists from INAH (Mexico’s National Institute of Anthropology & History) joined the team to continue the investigations.

La Mina, a 900m series of underwater passages in places no more than 70cm across, was found in one of the system’s three caves, Sagitario.

There Meacham and Devos noticed that many of the stalactites and stalagmites had been broken in half, while stones had been deliberately stacked in small triangular piles. There were also heaps of coal on the floor, soot marks on the ceiling and carved-out cavities on the ground containing traces of what turned out to be ochre.

The research team now believe that the prehistoric miners illuminated the caves by burning coal in fire-pits, and that they used the speleothem tips as digging tools to break through the limestone surfaces to the many tonnes of ochre within. The stone cairns were probably built for use as navigational markers.

Radiocarbon dating confirmed that the ochre had been mined 12-10,000 years ago. The caves were flooded some 7000 years ago, by which time they would probably have been long abandoned. Underlining the age of the site, Yucatan’s Mayan civilisation originated about 4500 years ago.

The dive-team took more than 20,000 photographs of La Mina using 360 underwater cameras over the course of 600 hours of diving. These have been used to create a 3D model of the site to allow the archaeologists virtual access.

Being able to carry on the work remotely in laboratories in Mexico, the USA and Canada is vital in terms of safety, says Meacham, noting that the slightest shift in the cave’s sediment would lead to total loss of visibility.

“Thanks to La Mina we now know that early humans not only risked their lives by entering the labyrinth of caves in search of water or to escape predators, but they also went inside them for mining purposes, thus altering them and creating cultural modifications within,” says INAH.

The study is published in the journal Science Advances.