Knocked out in the Park

Knocked out in the Park

You don’t have to be a macro photographer to get your kicks in North Sulawesi, as wide-angle man DAN BURTON finds out at Bunaken. Why did he leave it so long? 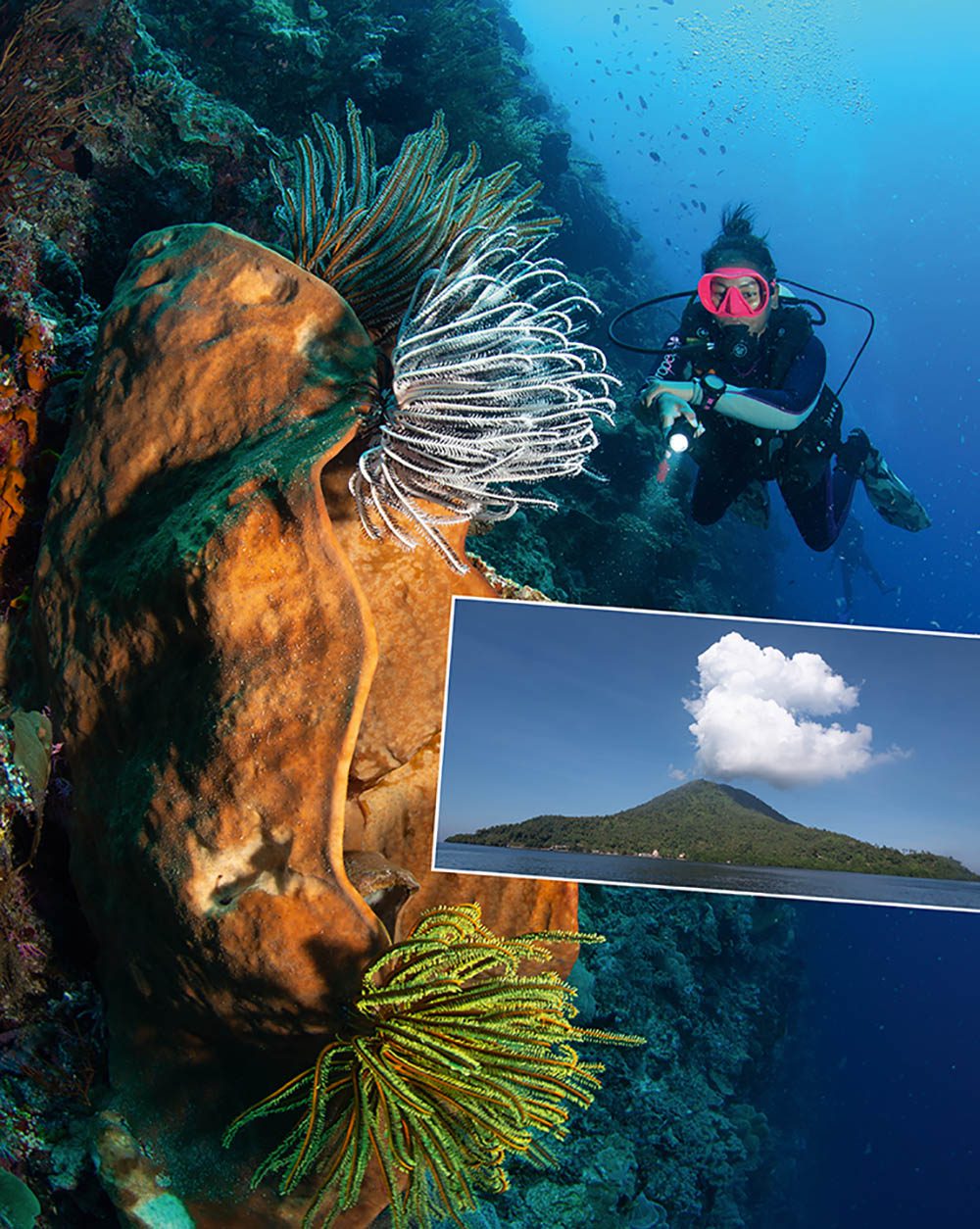 After 28 years away, I have finally returned to Indonesia, but this time to the magical island of Bunaken.

My last trip was back in the early 1990s, when I spent a month much further south, travelling through and diving Bali, Lombok and some of the neighbouring islands. I recall how untouched some of these sites were, and wondered if the reefs of Sulawesi today could be as good as those southern reefs had been then.

In the past few decades this has been the gateway to that world-class dive location for muck-diving photographers, Lembeh Strait, but I was keen to find out about the diversions Bunaken had to offer.

The small island is just 45 minutes’ boat-ride from Manado, situated in the National Marine Park established 30 years ago, and the charming Bunaken Oasis Dive Resort is located in dense forest on the western side of the island.

The resort doesn’t stand out when viewed from the sea, but merges into the landscape behind the mangroves. It’s a stylish and luxurious 5* establishment set on the side of a hill, with classy bungalows offering outstanding panoramic views.

Dive-centre managers Spencer and Chi provided a guided tour of the site and the plush and well-equipped diving facilities, which includes an air-conditioned camera-room with a small bench and charging area for each photographer.

But the place is also well-suited to those divers for whom photography isn’t everything. We were told that they can choose from 68 dive-sites all within five to 90 minutes of the resort.

Bunaken’s menu includes wall, mangrove, blackwater and muck dives, reefs draped in turtles, and a wreck-dive 45 minutes away. Unusually, there is also a well-equipped technical-diving facility for those who want to explore deeper or for longer. 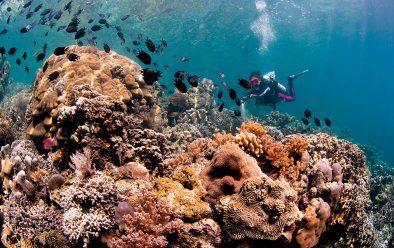 Next morning, we were whisked across the glassy seas on a modified traditional Indonesian dive-boat, and 20 minutes later reached Mike’s Point, named after an American diver. Guides Didi and Cindy briefed us and the helpful dive-team set up our kit.

From our backward roll we descended to the top of the reef. My first sight was of a school of dancing yellow pyramid butterflyfish twisting and turning in the dappling sunlight.

Didi took us to an area where there was a chance of seeing pygmy seahorses.

A master of spotting macro subjects, he quickly found a Pontohi tucked away on a tiny coral. This type of pygmy seahorse was discovered on the island in 2004 by Hence Pontoh, one of the resort’s guides – and he was on the dive with us.

It was the first Pontohi I had seen, and I couldn’t believe how small it was, but soon appreciated that once you get your eye in, tiny critters appear everywhere.

Macro was never my thing, but technical developments have enabled photographers to capture ever-smaller subjects – and to reveal previously unknown species year by year.

I was equipped with a fisheye lens, so had no way of capturing this delicate creature, but the memory is imprinted in my mind forever.

In the depths below us a pair of whitetip sharks patrolled the wall. These sleek hunters kept their distance and watched us with caution. Sharks can be hard to get close to, especially when you have a camera – some say that electrical signals in the water from the camera/flash can deter them from coming closer.

I tried dropping down and moving in stealthily without extraneous movement, but they saw me coming and swam away, leaving me frustrated.

After exploring for an hour we made our way to the top of the reef, where we saw a wonderful, colourful collection of pristine hard corals. 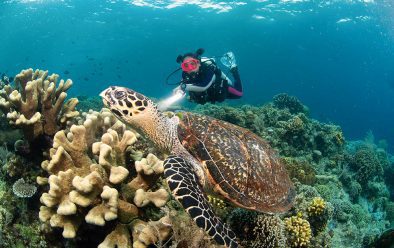 Cindy with a green turtle,

Large table corals spanned that reef-top, and among them a large green turtle chomping on some soft coral. I moved in nearby and spent a few minutes taking pictures of Cindy, who was also transfixed by the turtle.

Hence caught my eye and pointed out a small but highly venomous banded sea-snake hunting in the coral head. I managed to get extremely close, because it wasn’t interested in us, allowing me to take pictures of a species I have never photographed before.

It can hold its breath for more than 12 hours and dive to more than 250m, and is probably one of the most chilled species under water.

The island has a neighbouring extinct volcano called Manado Tua (or Old Manado). I was not convinced that it was no longer alive because there always seemed to be a lingering cloud hanging above, resembling smoke! The volcano towers up to 800m and continues to great depths below sea level, making it a perfect site to see larger pelagic species.

We headed over there to check out a favourite dive-site with guides, Fukui Reef. This is dived only at certain states of the tide, because the currents can be extremely strong. The risk of nasty down-currents makes some of the walls almost impossible to dive.

Hence did a current check, then the group did a negative descent, dropped down the slope and gently drifted along.

We were told to keep a good look-out in the blue for larger species. Everything was calm until, in a flash, the schooling redtooth triggerfish all disappeared into the reef.

What was going on? Within seconds two big dogtooth tuna appeared from out of the darkness below. The silver torpedoes shot back and forth in the school of silversides, picking out helpless fish. This frantic ambush was exhilarating to watch, however, as the ball of fish swayed to and fro in panic.

My pulses raced, and I couldn’t foresee what would happen next. Then, in the blink of an eyelid, the mayhem stopped and the reef was back to normal.

We left the reef and entered an open area where I spotted the largest giant clam I’d ever seen perched on an open sandy area.

The giant mollusc sat with its brightly coloured mantles wide open, twitching with every movement as we inspected it.

My first encounter with one had been in Australia on my Open Water course in 1988. My instructor had warned me gravely about getting my fin trapped in the gaping mantles, or was he teasing me?

Perhaps he had watched too many Tarzan movies in the 1970s!

During my visit I carried out a few technical dives to 50m on a wall, and also had the chance to dive the only local wreck, the Molas. 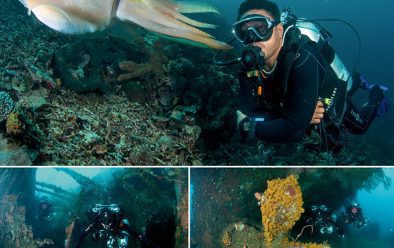 Top: Hence with a cuttlefish at Fukui. Above left: Cindy and Spencer dive the Molas wreck. Above right: the propeller.

The information available about it is not that reliable. Some say it was a Japanese freighter; others that it was a Chinese commercial iron ship. Local people who have done some research believe that the ship was actually Dutch, and sank near the end of WW2.

The Molas lies at a depth between 22m at the bow and 41m at the stern near the mainland a short boat-ride from Bunaken. We decided to dive it using air with nitrox 50 and oxygen to allow us a 40-minute bottom time with a light deco.

We dropped down the shot-line into a green gloom, and about 10m down the bow slowly appeared.

The ship sits upright on a sandy seabed, and over the bow the port-side anchor chain has uncoiled, extending down to the seabed 15m from the hull but with no sign of the anchor.

We made our way down the starboard side and could see that the davits had been extended, perhaps suggesting that the crew had made their escape in the boats during the sinking.

Just off in the sand lies the huge steam pipe, which appears to have been ripped off – but was this from the sinking or another vessel entanglement from the surface?

I had seen this type of damage when diving the Stella Polaris wreck in Japan.

Spencer led the way followed by Cindy. We headed to the stern, then dipped under the hull to see the remaining propellers deeply encrusted with decades of coral growth.

After a few minutes spent exploring under the hull we made our way up over the stern to the deck into the superstructure. After many years of deterioration, everything looked extremely fragile.

It’s always a great feeling when you go through a new wreck, or down a new passage. It leaves you wondering where you’ll come out, or what you’ll see around the next corner!

Peering over the port side, I could see a large dent in the hull. Opening up into a tear through the metal, it showed all the signs of a broadside ramming, so perhaps this was Molas’s final doom.

We made our way to the stern and up the shot and spent the last 15 minutes decompressing under the boats while watching the marine life go by.

Bunaken Oasis has won awards in part because of its strong emphasis on ethical operation, which puts it at the forefront of the game.

For example, it has eliminated plastic bags from the resort, produces its own fresh water and grows 40% of its own vegetables. The list goes on and on.

The team have clearly worked hard to get where they are, and are pushing hard to make the resort ever greener.

It also now has the Oasis Foundation, which releases rescued and injured young turtles supplied by local fishermen. Guests can get involved with these programmes, and also help to  plant mangroves in their nursery outside the hotel.

Since the introduction of the marine park the region and its marine life have thrived – let’s hope to see the Indonesian government implement marine parks all over the country!

GETTING THERE> Fly to Singapore or Jakarta, then on to Manado. 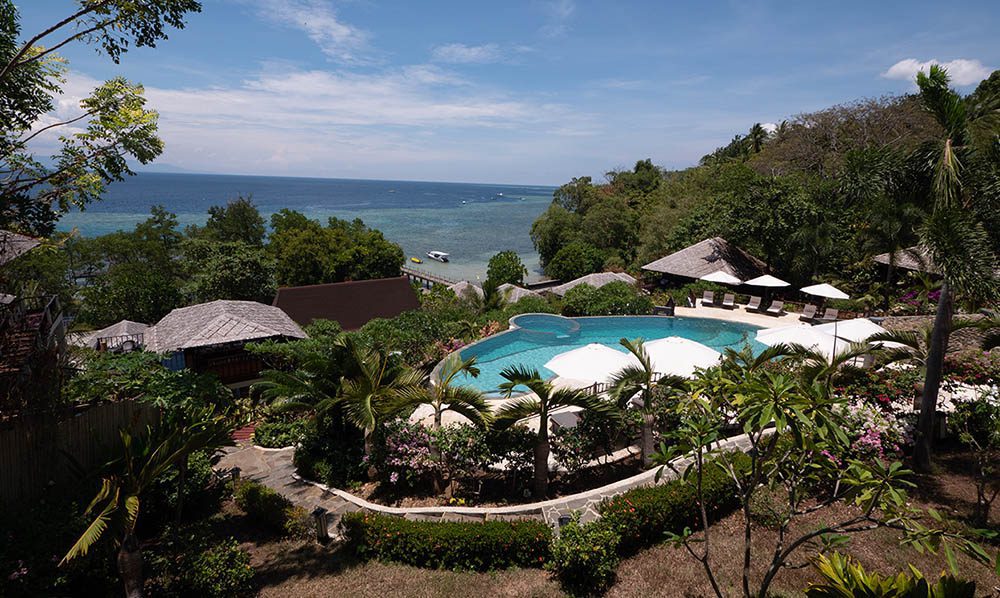 WHEN TO GO> Year round. Water temperature averages 26-28°C.