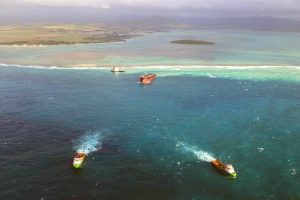 The worst fears of Indian Ocean diving destination Mauritius have been allayed, following extensive efforts to clean up the oil spillage caused after Japanese bulk-carrier mv Wakashio ran aground there on 25 July.

Tourism is a key pillar of the Mauritian economy and had already been hard hit by the border closure brought about by coronavirus. So the Mauritius Tourism Promotion Authority (MTPA), which has just issued an upbeat report on the incident, is naturally keen to minimise fall-out from the spillage.

It reports that damage to the island’s lagoons, shores and ecosystem remains localised in the south-east, with no more than 4% of the coastline affected and clean-up operations said to have progressed well.

Most of the scuba diving in Mauritius takes place further north on the island, where many of the resorts are located, particularly on the best-known dive sites of the sheltered north-west,

The Mauritian authorities worked with some 100 experts from around the world to contain the spillage, and the MTPA says that salvage teams succeeded in emptying the Wakashio’s tanks of their heavy fuel oil, leaving only a small amount in the engine-room. Oil that spilled into the south-eastern lagoons had been removed and disposed of in secured locations, it says.

The Wakashio was carrying 4180 tonnes of oil when she ran aground off Pointe d’Esny, but it was not until 6 August that an estimated 800 tonnes started leaking into the sea and lagoons from one cracked tank. Further spillage was stopped three days later after emergency teams had pumped 500 tonnes of oil out of that tank.

The vessel then broke in two on 15 August, the rear half remaining on the reef and the fore section set to be towed away. There was no further spillage at that point, says the MTPA,

Volunteers had turned out in force to support official efforts to contain the spread and remove oil already spilled in the lagoon, and the MTPA reports “significant progress” in recent days. In total 3184 tonnes of oil had been pumped from the tanks, and 884 tonnes of oil liquid waste and 524 tonnes of solid-waste sludge and contaminated debris collected.

The authority estimates that the oil-spill had affected between 6 and 7.5 miles of coastline, leaving more than 190 miles unaffected.

“Encouraging reports confirm that even major beaches of the south-east as well as the Blue Bay Marine Park are unaffected,” says the authority. “Beaches and lagoons on most of the south and east part of the island as well as in the north and west have not been affected.”