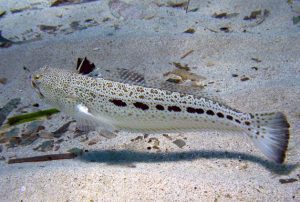 A 16-year-old Spanish snorkeller has died from a suspected attack by a spotted weever off Playa d’Aro in the Costa Brava.

The parents of the boy, who was named locally as Arnau B, raised the alarm on the afternoon of 15 August when he failed to return to the beach after about half an hour. When his body was eventually recovered by lifeguards, unusual marks were noted on his throat and face.

A post mortem concluded that he had gone into anaphylactic shock, potentially as a result of a discharge of venom, although toxicology reports were still pending.

The police took the boy’s action-cam in the hope that it would explain what had happened.

His parents, who had seen the footage, told local press that it showed their son about 100m off the beach following a jellyfish before coming across a “strange and colourful fish with a harmless-looking face”.

He had been filming it from a distance for half a minute when it was said to have attacked him, apparently around the jaw area, causing “instant death”.

Spotted weevers (Trachinus araneus) can grow up to 45cm long. The three black spines at the front of their first dorsal fin and backward-facing spines on their gill-covers are highly poisonous.

Weevers often bury themselves in sand with their spines protruding to catch small fish or crustaceans, so injuries tend to be sustained by paddlers or swimmers treading on them.

While the sting is extremely painful it is not usually fatal, but it has been known to trigger heart attacks or cause severe allergic reactions. Application of hot water is the recommended treatment, and the spines can be removed using tweezers.

The family was visiting the Costa Brava from the inland village of Montagut i Oix.