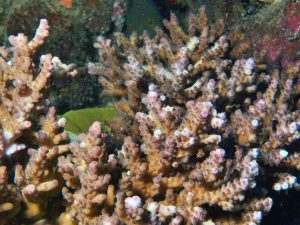 Ocean warming is usually associated with the destruction of coral reefs, but in Japan climate change seems to be giving coral a major boost.

Environmentalists might celebrate but not everybody is happy about the situation, as expanding coral colonies replace the seaweed beds that once provided a habitat for commercially valued marine life such as abalone, anchovies and bass.

Scuba divers have reported that tropical Acropora hard corals, mainly A solitaryensis, are increasing rapidly as seaweed beds disappear, and the fishing community is bemoaning its fate.

The effect, spotlighted in the sea south of Tokyo Bay in a report in Kyodo News, is firmly attributed to climate change in the north-west Pacific.

The seaweed beds have been disappearing over the past 12 years, as sea temperatures have remained above 15 degrees C even in winter, and reached record levels last year. At times they now exceed 28 degrees C.

Exacerbating the weakened seaweed’s overheating problem is increased damage caused by the rabbitfish, parrotfish and sea urchins that feed on it. With warmer waters, these species are now remaining active through autumn and winter.

As the seaweed beds die off, larvae carried by warmer currents grow into the young table corals previously found only to the south-west. Acropora solitaryensis, first noted in Japan in 1979, is reckoned to have expanded more than 200 miles north since that time.