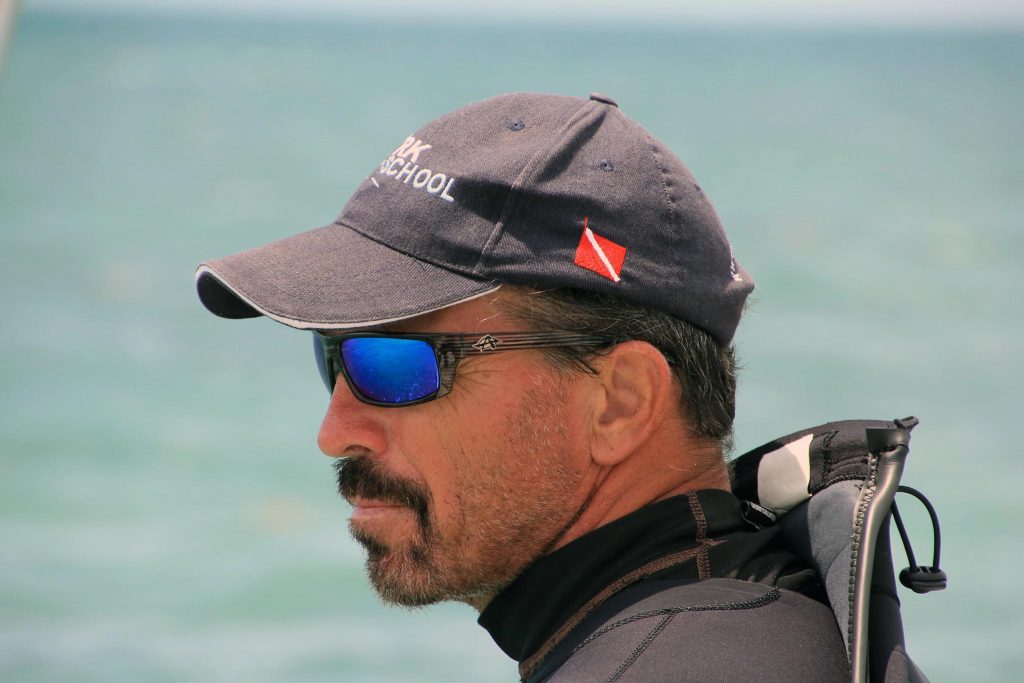 Shark-diving pioneer Dr Erich Ritter died in his sleep at his Florida home on 28 August at the age of 61. While his death was unexpected, he was reported to have suffered from a heart condition.

Ritter was born and grew up in Zurich, and gained degrees in zoology and paleontology in Switzerland and a PhD in fish behavioural ecology at the University of Miami.

He also became a scuba diver and instructor, and was early to adopt the cause of shark protection. Referring to himself as a “shark behaviourist” and “shark whisperer”, he started carrying out practical research into their behaviour patterns from the 1980s.

However, he became well-known across the global diving community only after surviving a bite from a bull shark in 2002. He had been standing surrounded by the circling sharks in shallow waters in the Bahamas, telling British TV presenter Nigel Marven that the sharks “couldn’t care less about them”. The attack was caught by Discovery Channel cameras filming the interview for Shark Week.

Ritter lost his left calf and was fortunate to survive a massive loss of blood, but the incident did nothing to shake his conviction that “there are no dangerous sharks, only dangerous situations”.

His approach tended to divide opinion between those who saw him as an insightful champion of sharks and others who regarded his theories as unscientific and his attitude reckless.

Much of his shark research was carried out in the Abacos islands in the Bahamas, where he ran the Shark Education & Research Centre, but he came up with the idea for organising “Sharkschool” field courses in Florida in 1996.

These schools went on to become regular events around the world in locations such as the Bahamas, Philippines, South Africa and Mexico, involving daily shark dives and seminars for an ever-growing body of adherents.

As a pundit Ritter came up with terms such as “angstination” – the combination of fear and fascination inspired in humans by sharks – and his ADORE-SANE mnemonic for gauging the relative safety of a shark interaction (Attitude-Direction-Origin-Reference-Environment… Scenario-Action-Nervousness-Experience)!

Ritter analysed and reconstructed shark-related incidents for the Global Shark Attack File at the Shark Research Institute at Princeton, and also campaigned for shark protection and in particular an end to commercial shark-finning.

He wrote a number of books and scientific papers, contending among other issues that shark attacks on surface swimmers were not the result of mistaking them for seal prey, as was commonly assumed, but involved “light” bites intended as target practice, play or a follow-up to the victim’s initial reaction. He also argued against the belief that human blood attracts sharks.

John Bantin joined Ritter on baited bull-shark dives in the Bahamas in 1999, and wrote for DIVER at the time: “Dr Ritter, a man whose speech patterns put me in mind of Peter Sellers’ Dr Strangelove, has many theories, and he was quite prepared to risk his safety to prove them. This included floating closely over a dead fish and allowing a big shark to take it from under him.”

Ritter told Bantin: “I don’t do what I do because I’m a daredevil. I want to show that you can swim with notorious species. We want to find out what people do to trigger the wrong reaction. We do stupid things like putting fish-blood on our hands to test our theories. The shark is a really smart animal. When you lose your fear, you begin to see what it really is.

“We are trying to develop a body-language system to build a bridge to the animal, to try to trigger favourable reactions rather than the wrong ones. We have to do this with species with a known record for attacks – reputed man-eaters. As you have experienced, we can swim with a pack of hungry sharks and do it safely. There really is nothing to worry about.”

Paying tribute to his close friend, Robert Wilpernig of Wirodive, the German travel company that provided the “back office” for Ritter’s Sharkschool, wrote that: “You gave everything for the sharks – your life and your home were the seas of our world, and the inhabitants, the sharks, were your children.”