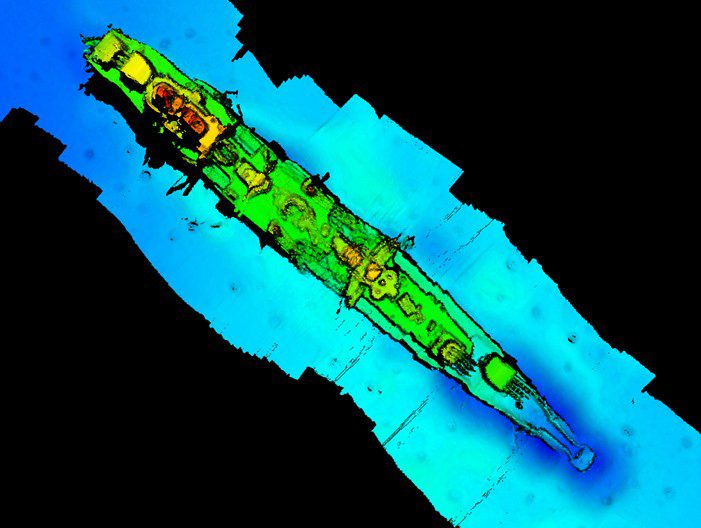 The wreck of long-lost WW2 German light cruiser the Karlsruhe has been discovered off southern Norway 80 years after her sinking, sitting upright at a depth of almost half a kilometre.

The discovery was made by Norwegian state energy company Statnett.

The second ship of the Konigsberg cruiser class, the Karlsruhe was launched in 1927 and operated before the war as a training cruiser for naval cadets in the Reichsmarine, before being modernised to serve with the Kriegsmarine. She was 174m long, armed with nine 15cm guns and had a top speed of 32 knots.

The Karlsruhe led an attack group that took the city of Kristiansand on 9 April, 1940 during Operation Weserübung, Nazi Germany’s invasion of Norway and Denmark.

Karlsruhe landed troops at Kristiansand but, having already come under fire and sustained damage from Norwegian artillery, she was struck by two torpedoes from the submarine HMS Truant, and was finally scuttled by a German torpedo boat.

Until now the vessel had remained the only large German warship lost in the assault on Norway that had not subsequently been located on the seabed.

As it turned out, the wreck lay a mere 15m from an undersea power cable running between Norway and Denmark, 13 nautical miles from Kristiansand.

Sonar-scanning had revealed it as a mystery wreck during routine inspection work three years ago, but it was only this summer that Statnett’s senior project engineer Ole Petter Hobberstad had the chance to investigate further.

He used a remotely operated vehicle and multi-beam echo-sounders from the offshore vessel Olympic Taurus. “When the ROV results showed us a ship that was torpedoed, we realised that it was from the war,” said Hobberstad. “As the cannon became visible on the screen, we understood that it was a huge warship. We were very excited and surprised that the wreck was so big.

“To find such a special war wreck is rare and extra fun for us who work with underwater investigations.”

Most surprising of all was that the Karlruhe lay upright. Usually, as wreck divers are aware, the high centre of gravity of large warships causes them to invert as they sink.

“But Karlsruhe stands firmly 490m below sea level with cannons pointing menacingly into the sea,” says Frode Kvalø, archaeologist and researcher at the Norwegian Maritime Museum.

“With the main battery of nine cannons in three triple turrets, this was the largest and most fearsome ship in the attack group against Kristiansand… After all these years, we finally know where the graveyard of this important warship is.”