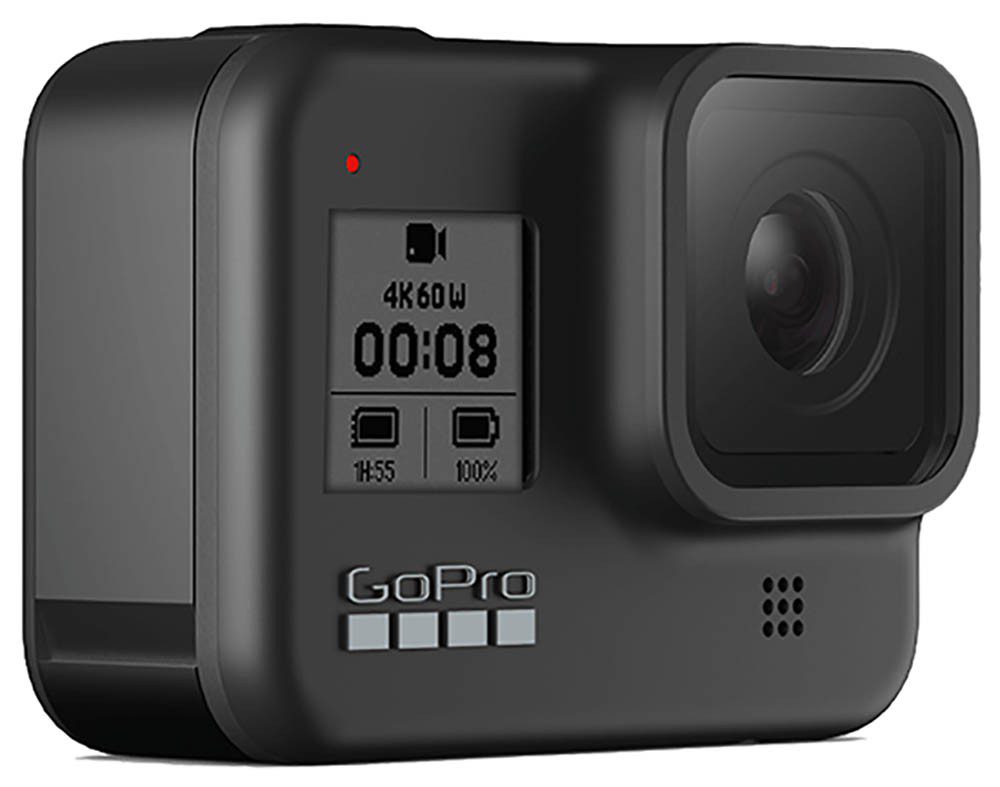 GoPro pretty much invented the action-camera market by selling people a tiny, easy-to-use video camera and encouraging them to record their wildest adventures.

Even the name, GoPro Hero, reeked of excitement. It was as if the whole world was waiting for somebody to come up with the idea, and when they did, kaboom!

Take a look at YouTube and you’ll find GoPro footage of pretty much everything.

No, strike the “pretty much” – if it hasn’t been filmed on a GoPro, it doesn’t exist.

Scuba-divers were among the early adopters. True, the early GoPros weren’t that great as diving cameras; they delivered much better footage above water than they did in the oggin, unless you were prepared to shell out on lights and filters and generally compromise the whole tiny and unobtrusive thing.

However, divers didn’t worry about that and just got on with filming everything they dived, GoPro in one hand and torch in the other.

GoPros were soon almost as common on dive-boats as regulators.

Today there are dozens of GoPro rivals on the market at all sorts of prices. A quick Internet search brought up full-HD action cameras selling for a fiver, which is just ridiculous, plenty of GoPro rip-offs complete with 30m dive-housing at anywhere between £25 and £75, serious branded competitors hovering around £200 or so and the diver-developed Paralenz at £465.

Simple question, then. Given such a crowded and varied marketplace, is GoPro still out in front with its latest iteration, the Hero 8?

Only one way to find out, and my thanks to Dave from Ocean Leisure for supplying a review sample for me to take diving.

The GoPro Hero 8 looks impressive as soon as it’s sitting in your hand. It’s small, yet feels surprisingly solid and meaty, built to last, with a soft coating, smooth finish and rounded corners.

It isn’t very heavy, just 120g or so, and it’ll drop easily into your BC pocket, but it does feel like a serious piece of kit. Pick one up in a shop and you’ll immediately understand that you’re getting something for your money.

The front of the camera features the lens and an information display screen that will tell you basic stuff such as battery life and recording time left. 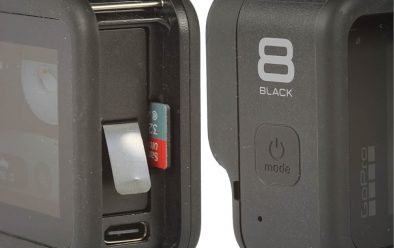 GoPro Hero 8 battery, microSD card and battery charger connection (left) and mode and power button set flush to the body of the camera.

The power and mode button sits flush with the left side of the camera, as seen from the rear, and the shutter button is on the right side of the top plate.

Pretty much the entire rear surface is taken up by a colour monitor screen/ viewfinder. Physical controls are limited to the two buttons, with the touch-sensitive rear screen intended to be how the user sets up and adjusts the camera.

As supplied, the Hero 8 is claimed to be waterproof, rated to 10m depth, and features a pair of foldable fingers under the base. Folded away, these sit in a shaped recess, so the bottom of the camera is flat and it will stand easily on any surface. Pulled down, they form the near-universal GoPro action-camera mount, and will let you to use the Hero 8 with any GoPro mounts you might have.

The combination of the two makes the camera very tempting for multi-purpose use, above and under water, and means you don’t need an extra mounting frame, as on other cameras.

The whole right side of the Hero 8 is a sealed, watertight door, released by pulling down on a tab at its base and lifting up the full panel, which is removable.

Under the door is the battery, micro-SD card slot and a port for charging the battery. GoPro provides the charger cable, which has a standard phone-charger or computer-port USB at one end and the appropriate plug to fit the camera at the other, and is as serious a piece of kit as the camera. The camera end isn’t a standard USB, so you’ll need to carry the GoPro cord if you’re travelling.

Charging took a little over an hour from flat and the camera will record continuously for around 100 minutes on the standard battery, with files limited to around 20 minutes each to make subsequent editing less of a trauma.

Spare batteries and stand-alone chargers are available, and if you’re doing more than one dive per day are probably worthwhile but, given the one-hour charging time, by no means essential.

Battery charged, I proceeded to set the camera up ready for use – and ran headlong into the first of the two things about the GoPro I didn’t like.

I’ve already mentioned the rear touch-screen, which is first rate as a viewfinder. Large, tack-sharp and colourful, it’s simply lovely to look at.

It works well as a touch-screen, too, being very responsive and easy to use, but it wasn’t intuitive and I found myself changing settings I didn’t want to alter, and then struggling to change them back.

I did get used to it after a few tries but, and this is important, it wouldn’t put me off buying a Hero 8. 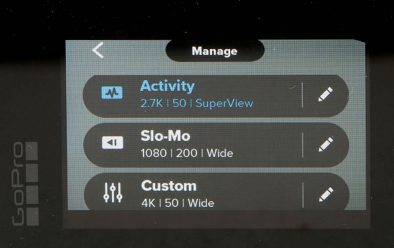 The thing is, the camera offers a huge range of settings accessed by a range of swipes and screen selections.

Some of the swipes are obvious, some much less so, requiring you to swipe down from the top edge, for example, but once you have the camera set up as you like it, you can store all the adjustments and then apply them with a single swipe through your list of pre-set modes.

There are four pre-named selections available, which you can alter to your taste, and you can add additional presets using the custom function if that isn’t enough. Or I could just use the GoPro app and set the camera up from my phone. Duh!

Dive-settings made, into the water I went, and immediately came across the only other issue I have with the Hero 8, that the control buttons aren’t easy to find without looking for them, and even less easy to press with gloves on.

They’re used to control the camera in the water, changing mode or taking a photo or starting and stopping video recording, so it’s not as if there’s a workaround.

Both mode and shutter buttons are square and set flush with the side or top of the camera, and while there’s a definite click to them when pressed, you will need to look to see that you actually have your finger in the right place.

Using the optional housing helps with this. The housing buttons stand just a little way proud of the housing surfaces and are easier to find. So that wouldn’t put me off buying a Hero 8 either.

I also made a very unpleasant third discovery. Rated to 10m or not, the Hero 8 I used wasn’t watertight in less than 6m of water.

Although it didn’t flood disastrously, I wouldn’t consider diving with it again without a housing.

But that wouldn’t put me off, either, because most dives will be deeper than the 10m nominal rating anyway, so you’ll use a housing.

Which brings us to the important part of the review, and the part that trumps touch-screen set-ups, fiddly buttons and questionable waterproofing of the basic camera, and that’s the quality of the files the GoPro produces.

They’re as good as anything any action camera can produce, and better than most. No, they’re not going to equal cameras with much larger sensors, but unless you’re the BBC I’d suggest that won’t matter too much.

Part of this is down to the range of video-file options. Topping the spec sheet is full 4k resolution at 60 frames per second. Another part of it is due to the high bit-rates the camera is capable of dealing with. This allows the camera to apply less compression when the files are recorded, effectively increasing the quality of the final images. 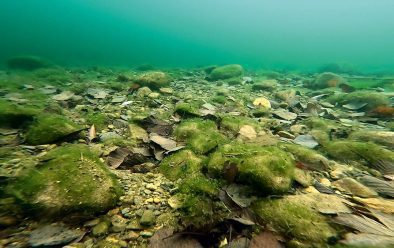 Lakebed at 5m depth on a dull grey January morning with the superwide lens angle of view.

Reducing the resolution to 1920 x 1080, full HD, and setting the bit-rate to high, produced video that was more detailed on-screen than a reference action camera set to the same resolution.

The trade-off was bigger files, of course, but if quality is important to you the Hero 8 is where it’s at for action cameras.

Next up comes the processing software, and GoPro has been developing its own for a long time. In good daylight conditions with the sun behind you, most action cameras will deliver decent results. I have a five-year-old £45 eBay special that produces results almost indistinguishable from the GoPro in ideal conditions. However, as soon as those conditions change, the GoPro blows it away.

Low-light performance from the GoPro is better than the small sensor should allow. Dynamic range, the gradation between light and dark, is very good, and colour is spectacular.

Even on a dull, grey, flat day the GoPro finds colour and impact from somewhere, and as divers those are the conditions in which we work.

Narrower angles of view can be selected, including a Linear mode that offers a wide angle of view with no fisheye-type distortion.

Then there’s the Hyper-Smooth shake-reduction mode that works uncannily well, under water or in high-vibration land applications.

There’s also a smoothness-boosting mode that you can try if Hyper-Smooth doesn’t cut it, though I didn’t find it much better.

The mode works by cropping the full frame to allow software room around the edges to smooth out jitters, but for once the crop is small enough not to be counter-productive under water, where wide-angle lenses that let you get really close are the standard.

Finally, there’s colour balance. Under water, the best action camera I’ve previously used has been the Paralenz, which coped well in both green- and bluewater environments. I wasn’t able to use the GoPro offering in blue water, but the greenwater colour delivery was certainly equal to that of the Paralenz, and better than other action cameras I’ve tested,

Add external lighting or filters and the performance of the GoPro improves. Actually, that’s another spoke in the GoPro wheel, one that comes from the popularity of the cameras, in that there are masses of third-party accessories out there to improve the usability of your camera.

So the Hero 8 was clumsy to set up and required a bit of attention to make sure I was pressing the right buttons, but it delivered class-leading images. If I were buying a camera solely for diving, and I was positive that it would be used only under water, I’d compare the GoPro Hero 8 with the Paralenz, then go for the GoPro because it has that rear screen.

If I wanted a use-it-anywhere action camera, I’d go for the Hero 8 – just making darn sure that I housed it before taking it diving.