Anemonefish might get all the attention, especially of underwater photographers, but where would they be without their photogenic hosts? And what of all the other creatures that call them home? asks BRANDI MUELLER

A variety of fish and other reef creatures are attracted to anemones.

Nemo made anemonefish famous, but do you stop to consider how incredible their homes are? It’s common knowledge that anemones provide a built-in security system that stings everything but their clownfish residents, but there is so much more to know about the amazing anemone, including the fact that Nemo is not their only resident.

Anemones have their own movie-worthy life-cycles and are part of many simultaneous symbiotic and mutualistic relationships, all of which occur under water.

Anemones are sometimes called the flowers of the ocean (the direct translation in Latin is flower) and they can come in vibrant greens, purples, pinks and yellows, with finger-like tentacles slowly blowing in the breeze-like current. They’re not plants but invertebrates belonging, along with corals and jellyfish, to the Cnidarian group. 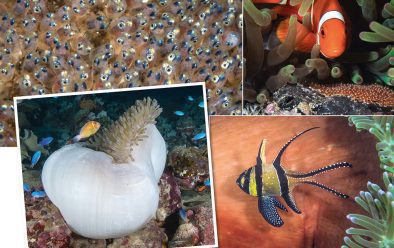 Clockwise, from top left: Developing eggs; an anemonefish caring for its eggs; banggai cardinalfish are among the other fish attracted to anemone life; some anemones ball up at the same time every day, or when threatened.

Carnivorous, they eat live prey, usually tiny plankton and fish, but some even eat stray jellyfish that might get entangled in their paralysing tentacles. Some are tiny, while others can grow up to 2m long.

There are more than 1000 species of anemone. Many live in coastal tropical water, but some can be found in depths beyond 3000m and in temperate and cold water. Another fun fact: the centre of the anemone is its mouth… which also serves as its bottom.

Anemone tentacles contain toxins, and when they’re disturbed even a little (such as when tiny plankton brush over it), they inject the potential prey with a nematocyst that contains neurotoxin designed to paralyse or kill.

Once immobile, the prey is guided by the tentacle to the mouth.

Some types of anemone, like the magnificent sea anemone (in which Nemo lived) can ball up, bringing all the tentacles closer to the mouth and essentially licking their fingers free of food. In some cases the balling up occurs at almost the same times every day. Anemones may also ball up if threatened.

Anemones have several ways of reproducing, including asexually through budding or fragmenting, or even in some cases simply by stretching to split into two new anemones.

Some species reproduce through internal fertilisation and release fully formed anemones from their mouths.

Others spawn (also from their mouth) into the water column at a synchronised time as other anemones and fertilised eggs drift, eventually settle on the seabed and develop into juvenile polyps.

Although we think of anemones as sessile, they do move. They attach to solid surfaces with a “foot” and can make small movements by shifting so slowly that we would need time-lapse imaging to see it.

Or they can release entirely and drift in the water column, undulating, until they find a new home. Other species of anemones hitchhike on other organisms.

Disney forgot to include the many other creatures that also call the anmony… amenmony… anemone home. 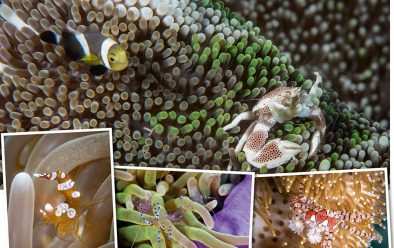 Clockwise, from top: Porcelain crabs are attracted to anemones; as are pompom crabs with their anemone boxing gloves; anemone shrimps; and sexy shrimps.

Cardinalfish, dascyllus, gobies and even one type of pipefish can be residents. Numerous species of crabs and shrimp can also be found including the porcelain crab and sexy shrimp, and several types of cleaner shrimp.

Other marine creatures have become creative when it comes to using anemones for their benefit.

The pompom or boxer crab cuts small pieces of anemone and attaches them to its front claws to use as a weapon to sting prey. The crab’s prey becomes paralysed by toxins and the anemone gets a roaming home (and food scraps).

The jewelled anemone crab places anemones on its shell, so not only does this hermit crab look super-stylish, it also uses the toxins as protection from predators, and as camouflage.

Hermit crabs are known to move shells as they outgrow them, and in this case the crab will transfer its anemones onto the new shell-home.

The anemone gets scraps of food from the crabs – and a mobile home.

While living in the anemone only indirectly, tongue-eating isopods are a resident straight out of a horror movie. In some areas, particularly Lembeh Strait, Indonesia, many anemonefish have these creepy parasites living in their mouths.

Attaching to their tongues, the isopod feeds partly off the fish’s meals and also slowly devours its tongue until the isopod in effect becomes the tongue. Sometimes you can see two beady eyes looking back at you from inside a fish’s mouth.

Spoiler alert: Nemo wasn’t actually a clownfish, but a false clownfish. There are more than 30 species of anemonefish that are subtypes of damselfish that live in anemones.

Anemonefish can be found in the Red Sea, and in the Indian and Pacific Oceans.

They usually live in a group with one female and several males. In fact, they are all born males and, if the female dies, the alpha male will change into a female.

So in real life Nemo’s dad would likely have changed into his new mum and Nemo probably would have grown up to mate with his father (now mother).

Did I just ruin the movie for you?

Anemonefish are not naturally immune to the anemone’s toxins. When moving into a new home they slowly acclimatise by touching small parts of their body for short periods.

Sometimes, if you’re lucky, you can see anemonefish eggs, usually laid on a solid surface near the base of an anemone.

While they blend in quite well, what usually gives them away is that the anemonefish will continuously go from the anemone to the eggs to care for them.

They blow on them and wave their fins over the eggs to circulate water and clean them of algae. As the eggs develop, the tiny eyes of babies can be seen. It usually takes 8-14 days for them to hatch.

Sometimes when the fish are protecting eggs they get very aggressive, and charge divers who get too close.

Clockwise, from top left: The jewelled anemone crab places anemones on its shell for protection; a shrimp provides its cleaning services; a spinecheek; and a skunk anemonefish; anemone in the process of bleaching.

Anemones that host fish have sometimes been shown to be larger and healthier. The presence of the fish is like a home having good tenants that protect it from thieves – perhaps butterflyfish that try to eat the tentacles – and acting as good housekeepers to clean the anemone of debris.

A larger anemone has more surface area to collect light, which keeps the symbiotic algae that live within happy too. The anemone also gets a free snack from the fish occasionally.

The symbiotic algae photosynthesise and provide part of the anemones’ food, in exchange getting a safe place to live.

It’s the algae that give the anemones their colour, and they suffer from bleaching just as corals do.

If the water is too warm for the algae they will either leave on their own or be expelled, leaving behind a bright white anemone.

This is bad news for Nemo and his friends, as they stand out dramatically in a pure white anemone and are more easily seen (and eaten) by predators.

The news isn’t all bad for anemones, however. Because they also eat plankton and fish, they don’t depend on algae for food. They also tend to survive bleaching better and for longer than corals.

Once the water returns to the correct temperature the anemones can take on new algae and the colour returns (although it might be a different one).

Often they come back smaller after bleaching events, so multiple events can lead to major damage. Some studies have shown that anemonefish living in bleached anemones produce fewer eggs after bleaching.

Nemo might still be the star of the show, but his amazing home deserves respect in its own right, as do the many other creatures that live there.