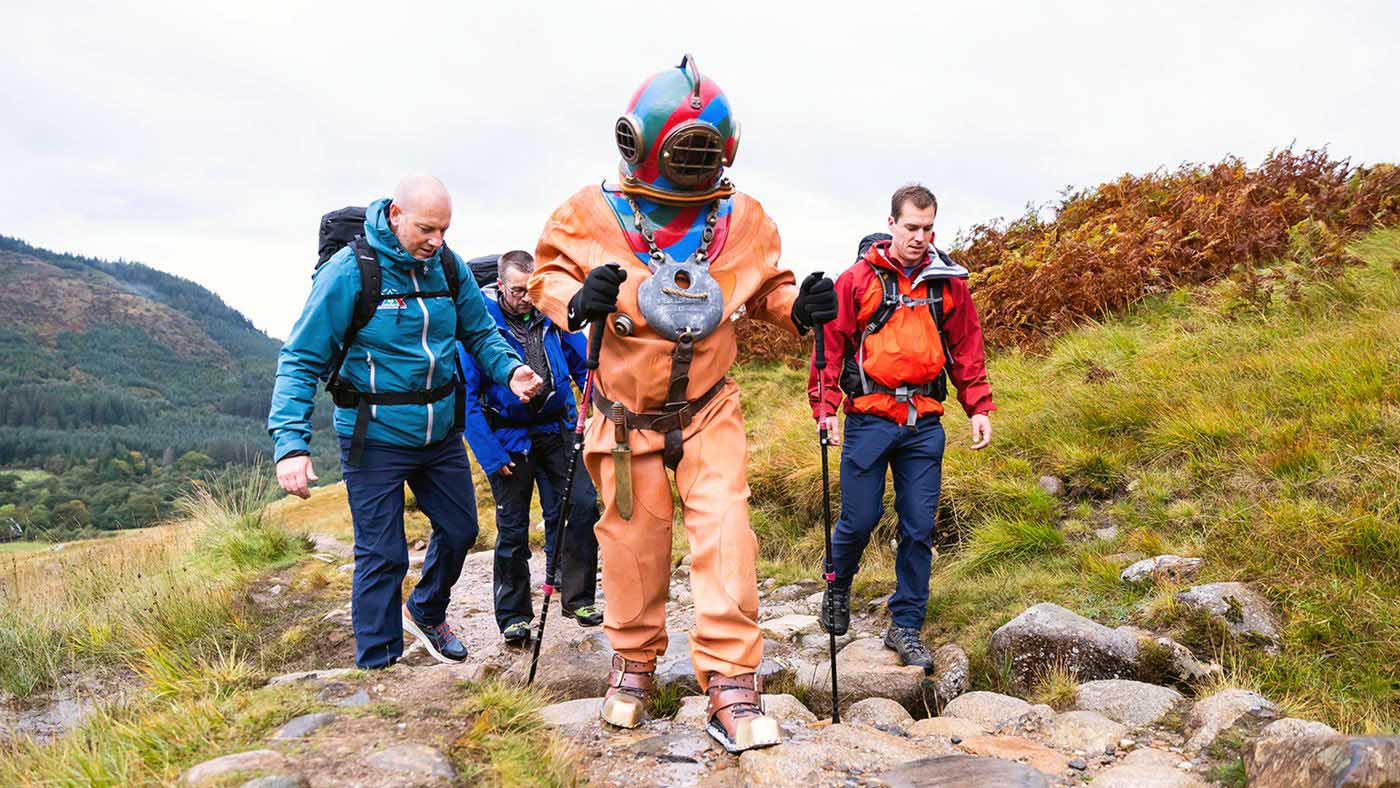 Longtime charity champion Lloyd Scott has completed his nine-day Three Peaks Challenge, climbing the last of Britain’s highest mountains while wearing a 59kg diving suit, helmet and weights. Celebrating his 59th birthday today (13 October), he has said that the mountain feat will be his last major charitable challenge.

The weather turned against Scott on the final peak, Snowdon. The veteran fund-raiser had to battle through torrential rain, strong winds and near-zero visibility to complete his two-day climb to the summit of Wales’ highest mountain by mid-day yesterday (12 October).

He had set off with his support team over the tough terrain of the Scottish mountains at dawn on 4 October, also in testing conditions, completing a seven-hour ascent followed by a night camping on the mountain. The next day he reached the British Isles’ highest peak, but it had taken a gruelling 13 hours.

Scott really started to feel the pressure soon after beginning the ascent of Scafell only a day later.

“My legs are pretty smashed,” he admitted 45 minutes into the climb. “It took me two days to get up Ben Nevis and normally after doing that in the diving-suit it would take two weeks to recover from.”

Despite this he made good progress to the halfway point where he camped overnight, but the next day progress proved difficult over steep, slippery terrain, with leg-cramps setting in. However he reached the summit at mid-day on 8 October, and descended for a brief respite before the climax of the challenge – the two-day ascent of Snowdon.

Scott, who has raised £5 million for charities over the course of some 50 campaigns, embarked on his fund-raising career after being diagnosed with leukaemia – by completing the 1987 London Marathon

He first became associated with hardhat stunts after covering the 2002 London Marathon course dressed in helmet and diving suit, breaking the world record for longest recorded time to cover the 26-mile course.

The following year he completed the world’s first underwater marathon in the suit in Loch Ness – that took 12 days and included a damaging fall off a 5m ledge. He went on to take part in five further marathons similarly attired, most recently in 2012 when he covered the Olympics marathon course in London in only six days.

The Three Peaks Challenge was carried out in aid of youth cricket and disability sports charity the Lord’s Taverners, with which Scott has long been associated.

The charity says that the funds he raises – currently around £54,000 –  will “help disadvantaged and disabled young people, who are battling loneliness and isolation. The Covid-19 pandemic has left them unable to access the charity’s vital programmes to meet new friends, socially engage and develop a wide range of personal skills.”

Donations can be made here.