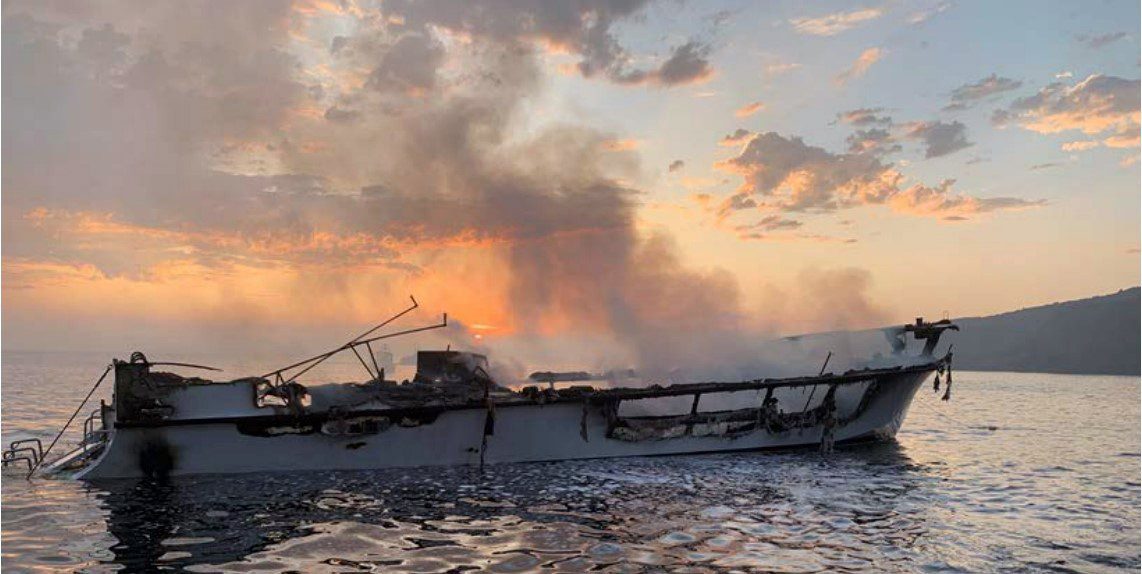 Major safety improvements for dive-boats and other small passenger vessels are called for by the USA’s National Transportation Safety Board (NTSB) in its report into last year’s devastating fire aboard the Conception liveaboard in California, which killed 34 people.

The details of the fire and its aftermath have been extensively reported on Divernet, most recently this January when results of a preliminary investigation were announced.

The 23m Conception had completed a weekend dive-trip and was anchored off Santa Cruz Island when the fire broke out in the early morning of 2 September, 2019. All 33 passengers, who were sleeping below in a single communal bunk-room, and one of the six crew who was with them, were trapped and died of smoke inhalation.

Both exits from the bunkroom led to the fire- and smoke-filled saloon area above, and the emergency exit was directly above bunks. Contrary to previous reports that the victims had been overcome by fumes while still asleep, it now seems that most had wakened but were unable to escape.

The NTSB has blamed the tragedy on the failure of Conception owner-operator Truth Aquatics to provide effective oversight of its vessel and crew operations. This included the requirement to maintain a nightwatch – the captain and crew had been asleep in the wheelhouse at the time of the fire – the lack of required smoke-detection in all accommodation spaces and, contributing to the high loss of life, the inadequate escape provisions.

The Conception had smoke-detectors in the bunkroom but these were not connected to each other or to the wheelhouse. There were none in the saloon above the bunkroom where investigators believe the fire started.

The dive-boat burnt to the waterline before sinking, leaving little physical evidence to help investigators establish how, when and where the fire started. But they believe it originated in the aft section of the saloon, the most likely ignition sources being the boat’s electrical distribution system, unattended batteries being charged or discarded smoking materials.

The NTSB is now calling for all US liveaboards similar to the Conception – under 102 tonnes and with overnight accommodation for up to 49 passengers – to have interconnected smoke detectors in all passenger areas. It also recommends that the primary and secondary means of escape should lead into separate spaces.

The board wants the Coast Guard to implement an inspection programme to verify that overnight crew patrols are carried out. It says the absence of such a watch on the Conception was likely to have delayed detection of the fire until it grew out of control, directly leading to the high death-toll.

“The Conception may have passed all Coast Guard inspections, but that did not make it safe,” said NTSB Chairman Robert L Sumwalt. “Our new recommendations will make these vessels safer, but there is no rule change that can replace human vigilance.”

The board also reiterated a call for a management system to improve safety culture among small-vessel owners and operators. It has no enforcement powers but can make recommendations to bodies such as the Coast Guard which, it seems, has brought no action against a small-boat operator for failing to mount a roving patrol for almost 30 years.

The families of 32 victims have now filed legal claims against Truth Aquatics and its owners Glen & Dana Fritzler, although they in turn were quick following the fire to file a claim under a maritime law that limits liability for vessel-owners. Criminal charges are also likely to be brought.

******  A SCUBA DIVER was taken to hospital following an incident at Kent inland dive-site St Andrews Lakes in Halling on the afternoon of Saturday, 17 October.

Paramedics with London’s Air Ambulance flew in, administered treatment at the scene and accompanied the diver to hospital by road.

A spokesman for Southern Scuba, which recently took over supervision of the site, told Kent Online that the diver, who had been under training with “an organisation that came to use the lake”, was monitored at Medway Maritime Hospital and later discharged.

Another diver had to be airlifted from St Andrews Lakes on 22 September, and a previous incident had occurred in late August, as reported on Divernet.