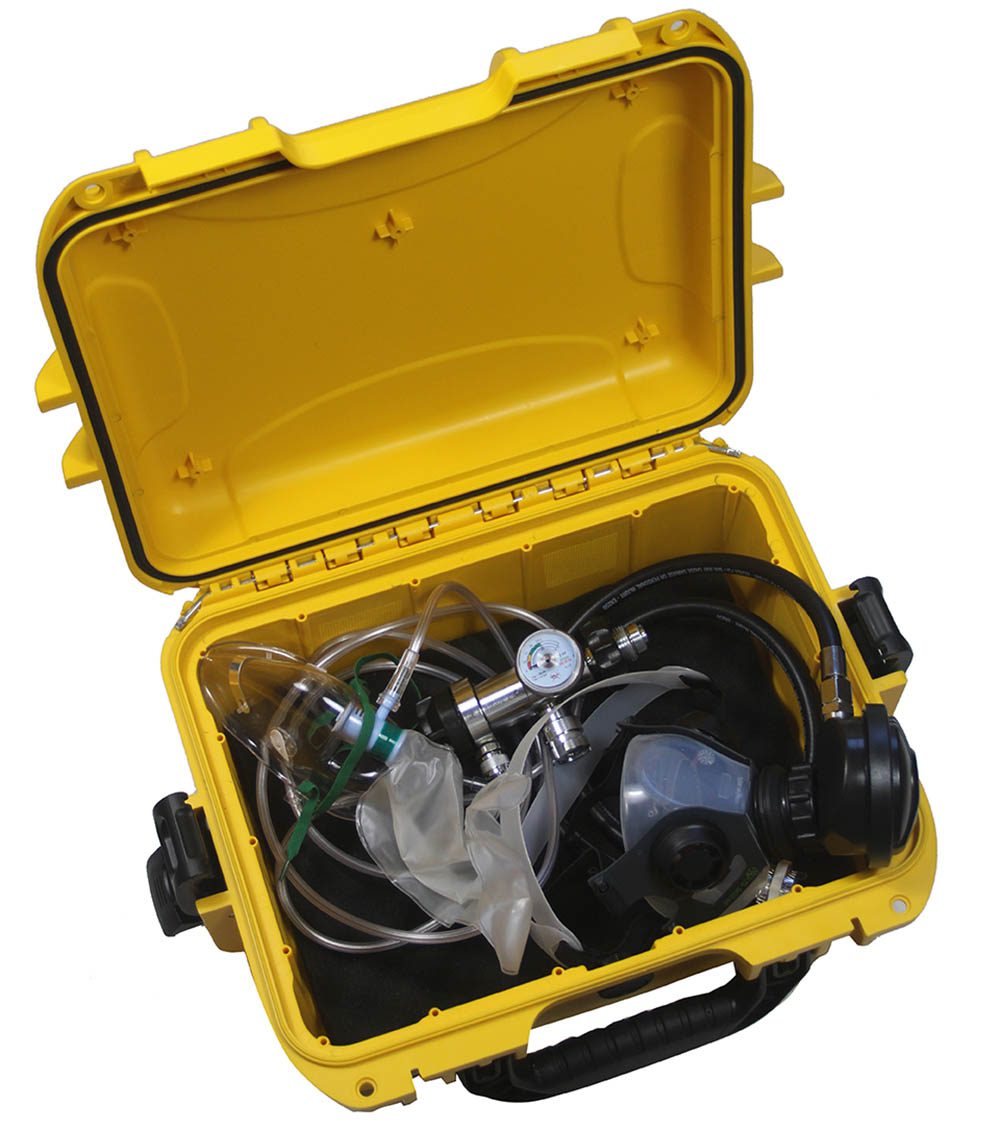 Twenty-seven years ago, in this very magazine, I read a review of an oxygen administration kit produced specifically for divers, and decided that my dive-club needed to have one.

At the time I was club vice-chairman, in charge of socials and fund-raising, and came up with a plan that involved a small but motivated group of us haunting the check-outs of local supermarkets, begging shoppers to invest in a raffle.

Half the proceeds would go to the RNLI, half to the club to purchase that potentially life-saving oxygen set.

If you’ve ever tried to persuade discount-crazed shoppers to part with money you’ll understand that it wasn’t easy, and the RNLI might have been mentioned more than the club in our pitch, but come raffle day we’d hit our target.

A cheque (remember them?) was sent to the RNLI and the oxygen kit ordered. It came in a sturdy tube containing a small cylinder for oxygen, empty, a constant-flow regulator and an oro-nasal mask.

Oxygen admin courses were organised, and the cylinder filled. This wasn’t simple back then, and was finally achieved by a member who worked in a place that used oxygen getting its BOC rep to do it on the quiet. The set was never used in the subsequent 10 years I dived with the club, but I never felt it had been time or money wasted.

Scroll forward 20-odd years, move south and east a good few miles, and my head breaks surface after a 75m dive on what had, not unexpectedly, turned out to be flat sand.

There’s a 4m swell, and I’m concerned to see the dive-boat’s prop heaving in and out of the water only just forward of the spine-ladder I’ll need to climb as it reverses towards me for pick-up. And that’s not going to be easy with twin-12s on my back, and two more clipped as stages.

Back on deck, heading toward the kitting-up bench using the approved hands-and-knees technique to avoid falling over as the boat pitches, I find my dive-buddy, who had opted for an SMB ascent rather than come back up the shot, already on oxygen and clearly in pain with a very sore left elbow.

Fortunately he was both conscious and rational. Between breaths he had already sought advice from the chamber in Hurghada.

And that’s the difference those years have made. Back in the day you dived air and liked it. Today you breathe nitrox or trimix or use a rebreather and nobody blinks an eye. You can get exotic gas-fills pretty much everywhere and cylinders of O2 are ready to hand, especially if you dive with a rebreather-user.

But divers still get bent, so an oxygen-administration set makes as much sense as ever. Probably even more so with O2 being as freely available as it is.

Enter the Nautilus Oxygen Supply System, a purpose-specified emergency O2-administration set for use by divers.

The set arrived in a very sturdy yellow plastic box. This isn’t part of the kit, but you’ll need something in which to store it safely and it would do the job, with heavy-duty lever-type safety catches and a sealing ring to keep water away from the contents.

Nautilus offers a range of similar boxes at various prices.

Inside was a regulator set consisting of a DIN threaded first stage and two second stages. One of these is a demand valve and connecting hose of the sort familiar to open-circuit divers, mated to a heavy-duty mask to cover and seal around your mouth and nose.

The other second stage is a clear plastic tube with a much lighter and simpler oro-nasal mask at the end.

The first stage is a hefty piece of kit at 800g on its own and is the heart of the system.

At one end is a standard DIN thread to screw into an O2 cylinder. If yours have a different-sized thread, you’ll need an adapter. 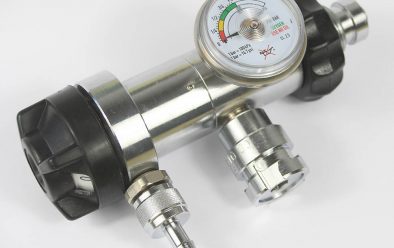 Next comes a pressure gauge that’s a bit smaller than an ordinary contents gauge but bigger than a button gauge. It’s marked to show “Full” at 200 bar, but there’s leeway for higher pressures, up to 315 bar marked. Those limits were clearly chosen to reflect real-life diving practice, and it’s plenty big enough to read easily.

Below the gauge is a bayonet fitting to attach the hose for the demand-valve mask, and beside that is a long nipple onto which the tubing to the simple mask can be pushed.

Finally, the opposite end to the DIN thread is a substantial black plastic turret with easily gripped ribs moulded into the surface, and a small window through which the figure 0 was visible.

The demand-valve second stage has a spring-loaded push-and-turn bayonet to engage with the first stage. The fitting is large, with easily visible prongs to allow shaky hands driven by the adrenaline of a real incident to cope.

There’s a white rubber ring on the bayonet-fitting to help as well, but I found that this could be moved easily, and even pushed off if I was clumsy.

Regardless, the fitting is chunky enough to assemble even with cold-numbed gloved hands. 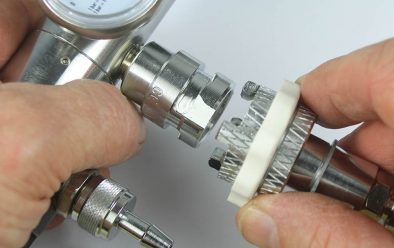 The demand-valve mask is substantial, and the added weight of the DV means that it needs proper straps to hold it in place.

There are two. The lower one is a black elasticated strap that passes over your head – it does have a break in the centre but I can’t see that being used in an emergency – and sits below the bump at the back of your head.

The upper strap is a two-piece hard plastic band that sits at the back of your head like an ordinary mask-strap. Both offer enough adjustment to fit a bare head or over a hood, and are simply pulled to tighten.

The mask encloses nose and mouth and needs to be adjusted to seal and ensure that the only gas the casualty inhales comes from the second stage. This is simply done by wiggling the mask around until it’s sorted. Flap-valves either side of the mask allow exhaled gas to vent.

Not that I’d be thinking about nuances of cracking effort or smoothness of inhalation if I needed to use the kit. More importantly, I’d be happy that the casualty was getting the gas needed. 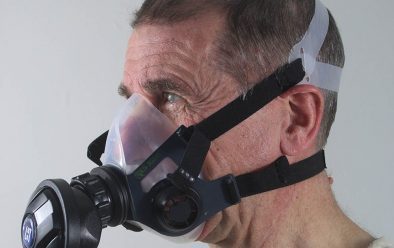 Demand-valve second-stage fitted with oro-nasal mask in use.

Figures from 0-30 litres of oxygen per minute are visible in the small window on the turret body as you turn, and you simply turn the turret to select the rate you want.

Set to zero if you’re using the DV mask. To find out what the supply rate should be, book onto an O2-administration course.

The adjustment is easily made with bare or gloved hands. The mask fits to a bare-headed or hooded casualty with a simple elastic strap to hold it in place. The strap is pretty much standard for such masks, but does feel a bit flimsy.

In use you’ll see a plastic bag on the front of the mask fill as oxygen flows into it, then empty a bit as the casualty inhales, refilling again from the cylinder constant flow, like the inhale counter-lung of a rebreather.

A small vent either side of the mask allows exhaled gas out, though the mask isn’t so tightly fitting that gas can’t escape around the skirt.

The small sealing discs intended to keep the side-vents shut when inhaling tended to fall off easily, but constant-flow masks like this are never perfectly sealed and the mask does the job. 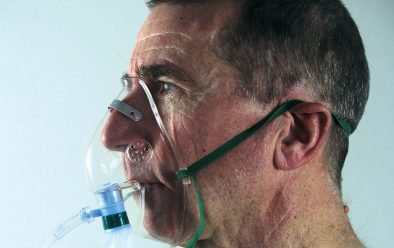 Constant-flow mask in place. The metal strip over the nose can be squeezed to improve the mask fit.

To use the Nautilus oxygen set, remove from whichever storage solution you’ve chosen, attach the first stage to your O2 cylinder as you would any other first stage, attach either or both the second stages, open the cylinder valve, set the constant-flow rate if required and then put the appropriate mask on the casualty and monitor closely until qualified medical help takes over.

If necessary you can use both masks at the same time and get a buddy-pair on oxygen.

And that’s it. The Nautilus Oxygen Supply System is a robust, well-made, easy-to-use piece of kit designed for emergency use on a dive-boat at sea or anywhere else, and it does the job.

Decompression illness is a capricious and poorly understood disorder, but emergency O2 used early can save your life, make the difference between being able to walk again or not, or just speed up recovery and ease discomfort.

Every club or group should have one, and then never have to use it. Would you like some tips on organising a raffle?