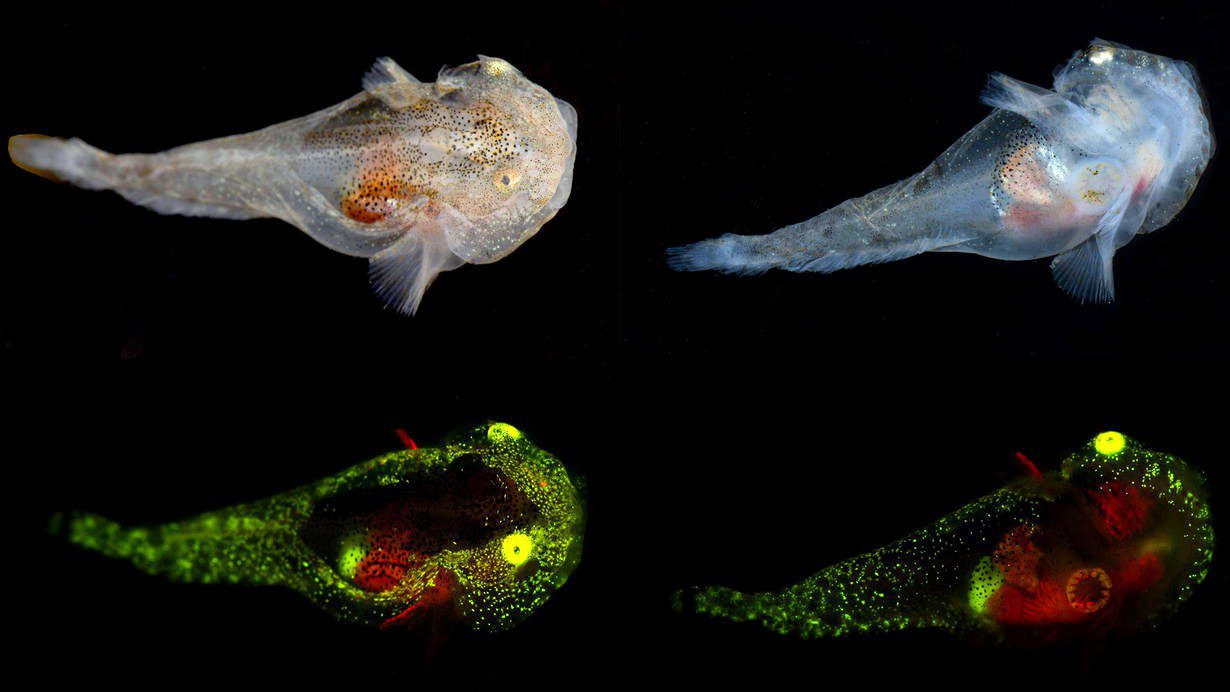 Biofluorescence, whereby marine life absorb energy from sunlight and emit it as a colour, is familiar to scuba divers in tropical waters. But now two diving marine biologists have documented the phenomenon in Arctic fish species for the first time.

A red-and-green-glowing snailfish (Liparis gibbus) was identified during dives among icebergs off eastern Greenland during a 2019 Constantine S Niarchos Expedition, according to a just-published report.

The divers had failed up to that point to find evidence of marine fluorescence among Arctic invertebrates or vertebrates. “So we were surprised to find these juvenile snailfish brightly fluorescing in not just one, but two different colours, which is very unusual in a single species,” said icthyologist John Sparks, an American Museum of Natural History curator and co-author of the study.

He and David Gruber of Baruch College, a research associate at the museum, had in the previous seven years identified 180 new biofluorescent species in regions with an even amount of daylight year-round.

Discussing their research one day in a New York café, talk had turned to how prolonged Arctic darkness might affect biofluorescence in fish – and led to the expedition.

“As soon as we got to Greenland, we realised: ‘Boy, we might be in over our heads,’” says Sparks in a video about the dive-trip, which can be seen on YouTube.

“The dives are brutal. They’re exceedingly cold – it’s crazy in a way.

“We targeted Greenland because there were groups there, like the scorpionfishes, that we found elsewhere that fluoresce, so we could directly compare it to tropical or temperate regions.”

“We did dives in several different habitats,” says Gruber. “We looked in fjords, we looked in the kelp forest, and in several of the dives we actually looked for specimens in the ice, among the icebergs.

“In the tropics, almost all hard corals are fluorescent. Many of the anemones are fluorescent and when we get to Greenland there’s almost zero – and that’s interesting.”

Eventually seeing the glowing fish came as a shock. “Finding a red and green biofluorescent snailfish on a dive among icebergs at night felt like a moment straight from The Life Aquatic with Steve Zissou,” commented Gruber.

“We are now focusing our efforts on determining the function of fluorescence in various fish groups, including cat sharks, where we have shown that bright green fluorescence enhances contrast in their pigmentation pattern, making it easier for individuals to see each other at depth,” said Sparks.

The divers’ Arctic study is published in the journal American Museum Novitates.