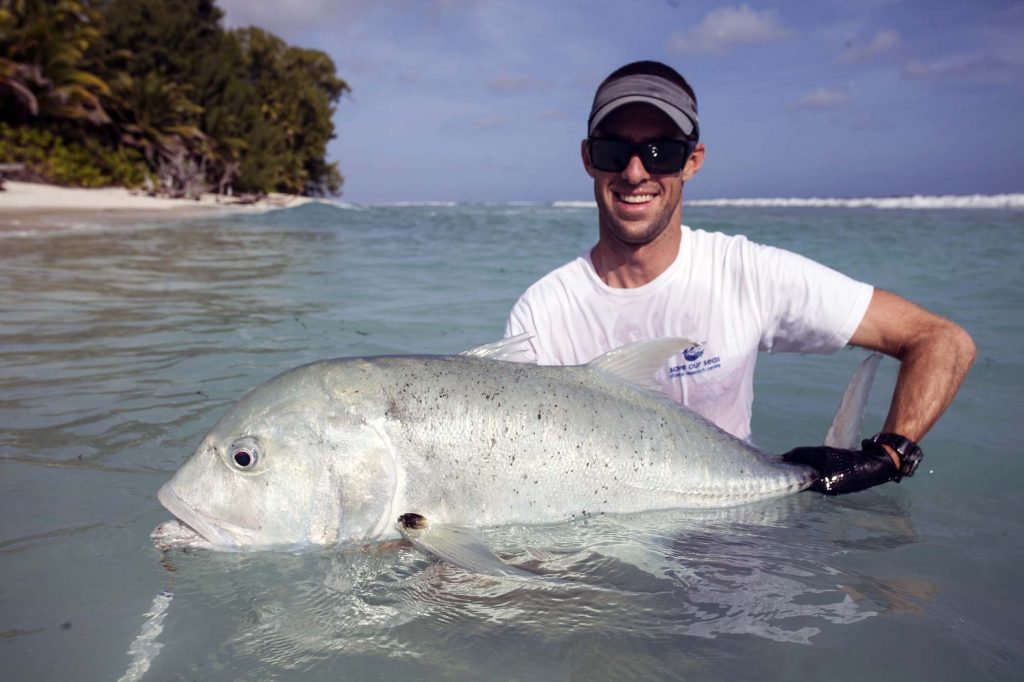 The Seychelles giant trevally drew public attention when televised attacking seabirds in Blue Planet II but as a keystone species in the marine ecosystem now needs protection, says the Save Our Seas Foundation. SOSF has just produced a study revealing that the fish has a wider range than previously realised.

Sea anglers prize giant trevally, which can grow to 1.7m and weigh as much as 86kg, and Seychelles is seen as prime location for catching the fish, leading to fears about their sustainability.

Geneva-based SOSF is participating in an initiative to determine which 30% of Seychelles seas should make up 13 Marine Protected Areas recently proposed by the government.

The foundation’s study, carried out by its D’Arros Research Centre, indicates that giant trevally nurseries need to be conserved to safeguard the next generation, and that areas frequented by the adult fish are wider than had been suspected from previous studies elsewhere in the tropics.

Individual fish were acoustically tagged in 2019 and tracked across the Amirantes group of Seychelles outer islands. Juveniles stayed close to St Joseph Atoll but ranged more widely as they grew until, as adults, they were traversing the entire Amirantes Bank.

Large adults occasionally travelled even longer distances, probably driven by hunger and because their size made them more secure.

The Amirantes Bank including St Joseph Atoll has been designated a “Zone 2” protected area, in which fishing by foreign vessels is due to be banned.

The SOSF now recommends that all fishing of giant trevally other than possibly catch-and-release should be barred in this area, and that further protection measures should be considered for the wider area. Its study is published in the Marine Ecology Progress Series.

Meanwhile the SOSF is offering grants for scientists, conservationists and educators who graduated in the past five years and have plans for innovative shark & ray protection research and education projects in 2022. It says it has supported almost 400 such projects in more than 80 countries to date.

Its “Small Grants” programme is dedicated to supporting 12-month to 18-month projects, and initial applications are now open until 30 June, 2021.