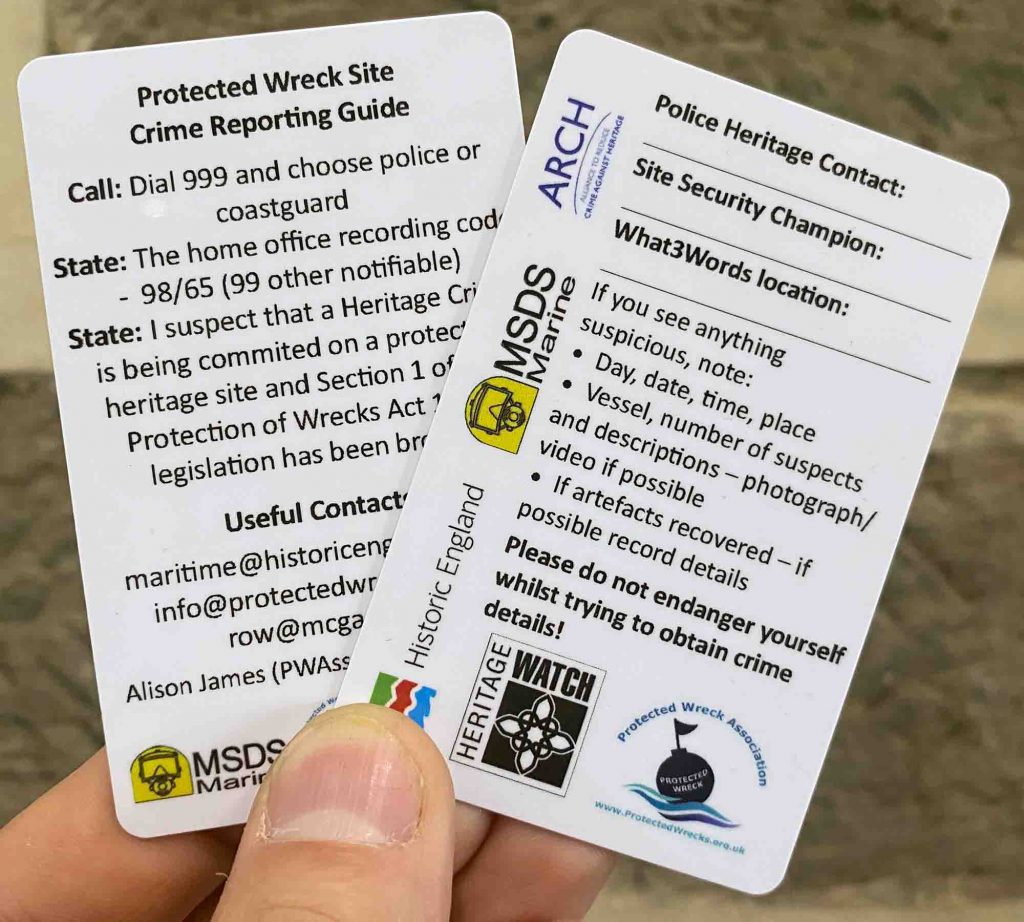 Underwater wreck-sites are too often out of sight, out of mind, according to maritime archaeological group the Protected Wreck Association – but now the PWA is deploying a new weapon to deter theft or vandalism of wreck artefacts, in the form of Site Security Plans.

Sites of historic, artistic and archaeological importance designated under the Protection of Wrecks Act 1973 are managed by Historic England (HE) on behalf of the UK government with the help of a team of licensees.

If not for the efforts of licensees and their teams of volunteer scuba divers “many of the sites would still be unknown and we would have very little knowledge of many of the existing sites”, says the PWA. “Their presence on the sites acts as a deterrent to anyone thinking of accessing the sites illegally and their monitoring ensures that the sites are understood and enjoyed by many people.”

Site Security Plans for protected wreck sites have been developed as a partnership project between the PWA and contractor MSDS Marine, funded by HE. Each plan results from an individual assessment of a site’s security, produced by completing two forms. The site is then given its own Site Security Champion and allocated a police Heritage Crime Officer.

The risk level is assessed to allow targeting of resources, and risk-reduction approaches are considered. Licensees have to follow a protocol whenever they access the wreck-site, and a high-vis vest is issued to identify the Site Security Champion, along with cards containing guidance on reporting heritage crimes.

The project team says it will support licensees in completing Site Security Plans and risk assessments for each site, and forms are available here.

“The model we have developed is based on the highly successful model developed by SWMAG [the Salcombe Cannon and Moor Sands sites licensee], which has been shown to work on a number of occasions. We hope this will make a real difference to the sites and the teams that work on them.”

“We are delighted and grateful that HE has funded this project,” said PWA chair Prof Mike Williams. “It will enable us to undertake valuable work to support our members, who are dedicated volunteers protecting our maritime heritage.”