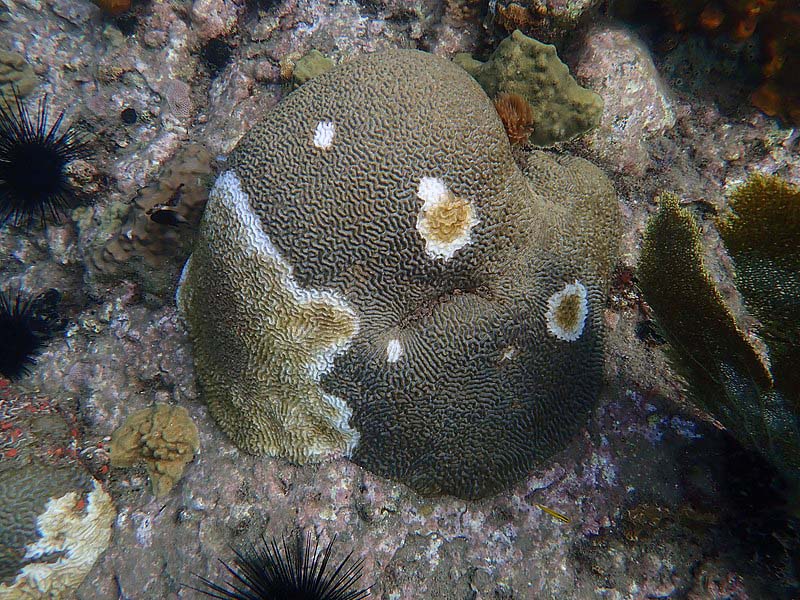 Transmission of a deadly hard-coral disease to isolated dive-sites in the Cayman Islands has led the Department of Environment (DoE) to suspect that scuba divers and boat operators have been unwittingly responsible.

Since then it has spread along most of the 22-mile-long north coast, and more recently there have been isolated outbreaks on reefs as much as two miles apart in the north-east and south-east of the island.

Now a new front has appeared at the isolated Anchor Reef dive-site in the south-west, making intervention to halt the spread of the infection even more challenging.

SCTLD, which first appears in the form of pale lesions, had originally been thought to transfer between reefs on currents. Now, despite a marked reduction in diving activities with the lack of tourists during the Covid pandemic, it seems likely that local divers’ equipment is being contaminated and also that operators’ boats are shifting the disease in their bilges.

Addressing a Cayman Islands Tourism Association meeting on 27 May, as reported in the Cayman Compass, DoE deputy director Tim Austin said that discovery of the disease at dive-sites unconnected to the original line of infection had led to a “real horrible inkling that this might be related to diving practices”.

Sister-islands Cayman Brac and Little Cayman have shown no signs of infection, and under new DoE guidelines divers taking their own gear there from Grand Cayman must have it thoroughly disinfected. Divers and operators in Grand Cayman are also being discouraged from making multi-site trips between infected and uninfected areas.

The DoE has been martialling divers to apply antibiotic paste to infected coral reefs, the only means so far identified of containing the spread of SCTLD. The disease has caused extensive damage to corals in Florida, and in the Caribbean has been reported in Mexico, Jamaica, Sint Maarten, St Thomas and the US Virgin Islands.

The Cayman Islands have remained closed to all scheduled inbound and outbound international passenger flights throughout the coronavirus pandemic.