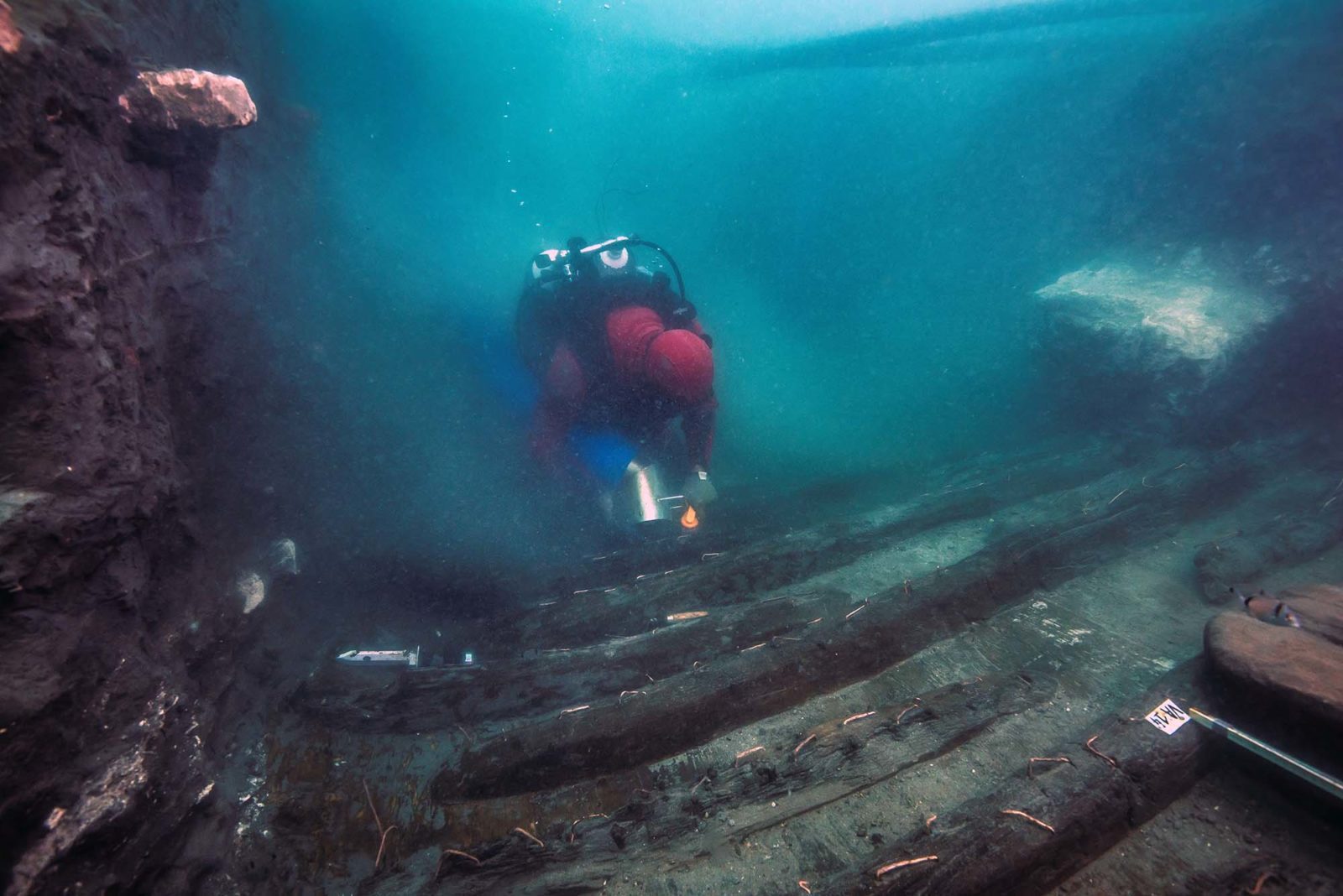 A rare ancient galley has been discovered by underwater archaeologist Franck Goddio and his dive-team in the sunken city of Thonis-Heracleion, off Egypt’s Mediterranean coast.

The naval vessel is known to have sunk after being struck by large blocks from the temple of the supreme Egyptian god Amun, as it collapsed during a cataclysmic landslide in the 2nd century BC.

The galley had been moored at a jetty on the deep canal that flowed along the south face of the temple, and the falling blocks had pinned it to the canal-bed, preserving the remains as any spaces were filled in with debris.

Goddio’s European Institute for Underwater Archaeology has been working at the Bay of Aboukir site for more than two decades, in collaboration with Egypt’s Ministry of Tourism & Antiquities and backed by the Hilti Foundation.

Thonis-Heracleion lies more than four miles off what is now the Egyptian north coast, but for centuries it was the country’s largest Mediterranean port, guarding the entrance to the Nile before the Greek king Alexander the Great founded Alexandria in 331 BC.

The Ptolemaic dynasty, ruled by one of Alexander’s generals, replaced the pharaohs soon afterwards and lasted for nearly three centuries. However earthquakes, tsunamis and rising sea levels triggered soil liquefaction that caused 42 sq miles of the Nile delta to collapse beneath the sea, including Thonis-Heracleion. Goddio’s divers rediscovered the city in 2000.

“The finds of fast galleys from this period remain extremely rare, the only other example to date being the Punic marsala ship,” said Goddio, referring to a vessel dated to 235 BC.

“Before this discovery, Hellenistic ships of this type were completely unknown to archaeologists.

“Our preliminary study shows that the hull of this galley was built in the Classical tradition and relied on long mortise-and-tenon joints and well-developed internal structure. However, it also contains features of ancient Egyptian construction.

“It was a rowing ship that was also furnished with a large sail, as shown by a mast step of considerable dimensions. This long boat was flat-bottomed and had a flat keel, which was quite advantageous for navigation on the Nile and in the delta.

“Some typical ancient Egyptian shipbuilding features, together with evidence of re-use of wood in the ship, indicate that it was built in Egypt. With a length of more than 25m, it had a length-to-breadth ratio close to 6 to 1.”

In another part of Thonis-Heracleion, excavating a mound beside the north-east entrance canal has revealed remains of an extensive Greek funerary area dating back to the start of the 4th century.

Greek merchants and mercenaries lived in the city near the Temple of Amun, and evidence of their funeral offerings were recently found among the temple remains.