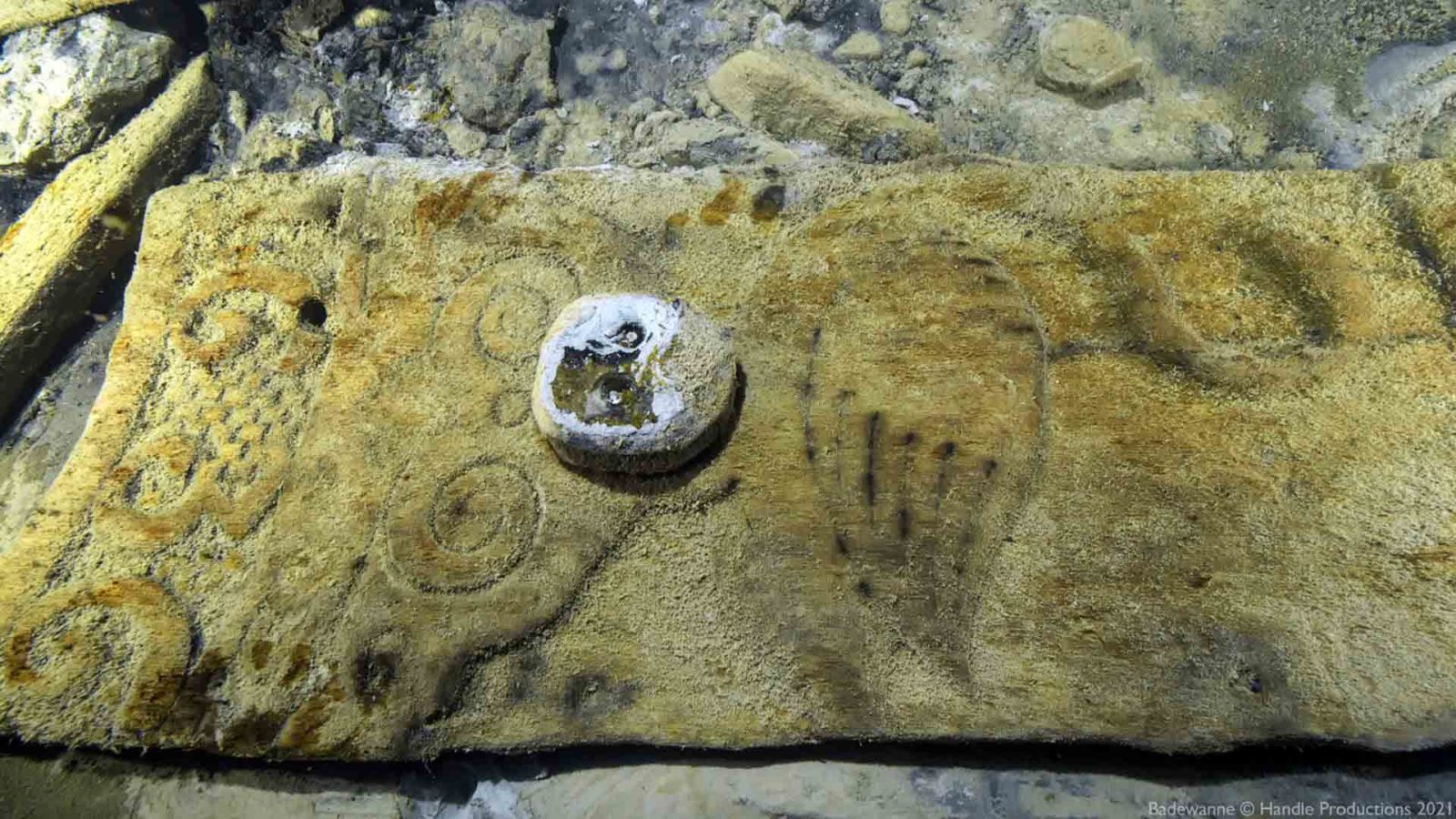 Date and swan engraving – with a deadeye stuck to the transom. (Picture: Badewanne / Handle Productions)

Working at a depth of 85m in the Gulf of Finland, technical divers have been able to identify for what is thought to be the first time a 17th-century ship by examining its timber transom.

The rare Dutch fluyt-style three-masted merchant ship was found during a seabed survey last summer, as reported on Divernet. Lying between Finland’s Hanko peninsula and the Estonian island of Hiiumaa, the wreck had been well-preserved by the conditions of low salinity, darkness and cold temperatures of the Baltic.

The wreck was subsequently dived by the Finnish group Badewanne. It sat upright with most of its rigging scattered around and its side-planking still in place, but a trawl-net appeared to have damaged the poop-deck and part of the timber transom, which had fallen to the seabed and lay inverted.

The divers, limited to 20-minute bottom times and unwilling to risk causing any damage, were unable at the time to turn the transom over to read the vital information they knew it could contain.

They returned this July, having planned with maritime archaeologists how to flip the transom safely, but saved that operation for the last day of their two-week expedition. “The carvings had survived hundreds of years on the transom plate, still revealing the identity of the ship,” reported the team.

“This ship had been constructed in 1636 and her name was the Swan. During those days names were not written. Instead a carving on the transom plate presented the name, because many people were illiterate so could not read it.”

The divers also took measurements and from their photographs created a photogrammetric 3D model to calculate its dimensions. With this data along with the name and year of construction, they are now hoping to trace the ship in the archives.

There is also a possibility that a coat of arms revealing the ship’s home port remains to be found among surviving transom decorations. Although fluyts were a Dutch design, the style was widely imitated so the Swan was not necessarily from the Netherlands.

To maximise cargo capacity, fluyts were unarmed and had large holds and small crews, made practical by their advanced rigging systems. This made the style popular but few examples have been found, even in the Baltic Sea.

The expedition was carried out in a collaboration with the Finnish Heritage Agency of Antiquities, Stockholm University and the Cultural Heritage Agency of the Netherlands. The team stayed aboard the schooner Joanna Saturna and dived from the dive-boat Deep Explorer.

Badewanne is working with film production company Handle Productions on a documentary about the wreck.