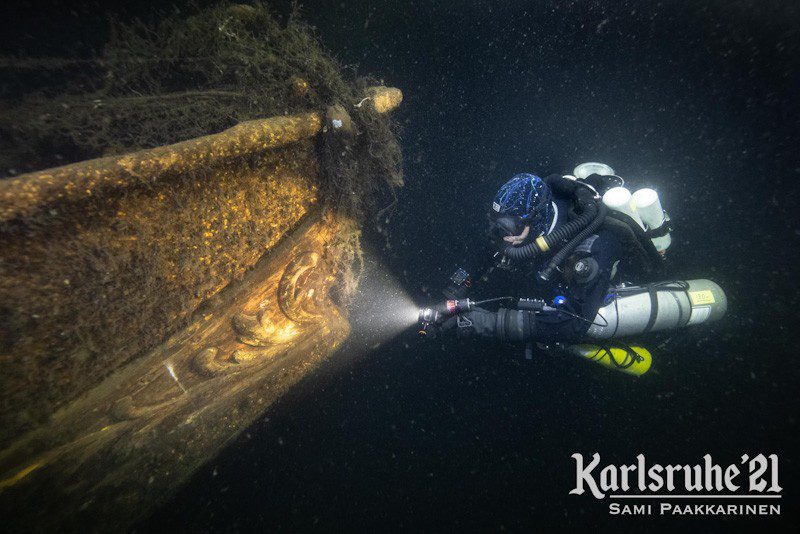 Diver Phil Short on the Karlsruhe.

Technical wreck divers hoping to locate the long-lost panels from the fabled Amber Room, looted by the Nazis from Russia’s Catherine Palace in WW2, have drawn a blank.

The Baltictech dive-team had announced their discovery of the German steamer the Karlsruhe last October at a depth of 88m, as reported on Divernet. Their return to investigate a number of mysterious crates found on the wreck had been long in the planning.

Karlsruhe had been taking part in Operation Hannibal, the evacuation of more than a million German troops and East Prussian civilians in 1945 in the face of the Russian military advance.

The last German ship to leave the port of Koenigsberg on 12 April, 1945, she had been carrying 1083 refugees and 360 tons of cargo, but was sunk by Russian aircraft off Ustka on the Polish coast the next day.

Along with military vehicles and porcelain the Baltictech divers had found crates that they surmised could contain the missing amber, gold-leaf and mirror-decorated Amber Room wall-panels, looted by the Germans in 1941. Last seen in Koenigsberg in 1945, it now seems that their whereabouts must remain a mystery.

On the fourth day of this month’s expedition, which concluded on 8 September, the Baltictech divers revealed that the crates had been found to contain only military equipment, while smaller cases held passengers’ personal belongings.

“We didn’t touch them, of course, but they were impressive regardless,” the divers reported.

They added that the luggage, footwear, belts and other personal items scattered around the site “did not allow us to forget that nearly 1000 people died in the Karlsruhe wreckage”, and the expedition concluded with a minute’s silence to honour the victims.

The divers obtained video footage of the Karlsruhe and also examined a smaller wreck 500m away that turned out to be a yacht, possibly sunk at the same time.