… but I’ll never forget those Threshers!

…but I’ll never forget those Threshers!

A magical Malapascus dive leaving precious memories – and all done before breakfast. By Melissa Hobson. Pictures by Henley Spiers 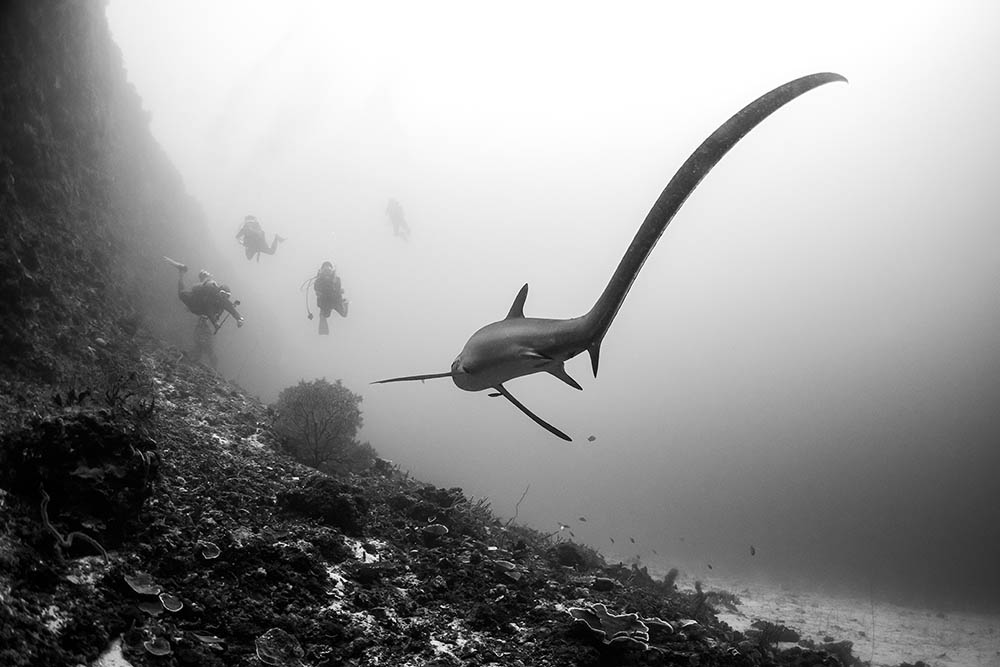 The minutes ticked by. Tick, tick, tick. It felt as if we had been waiting longer than we should have.

We had dragged ourselves out of bed at 4am for the best chance of seeing the thresher sharks. First thing in the morning is when they rise from the deep to visit the shallower cleaning stations.

That’s why Monad Shoal in the early hours is where divers can spot them, if they’re lucky. Miss the boat, and you might miss the sharks!

It was a cloudy morning and the stars, usually dazzling on remote Malapascua, were nowhere to be seen. I hoped this wasn’t an omen of similarly absent sharks – if we ever made it that far. Our pick-up still hadn’t arrived.

When it finally did (the contracted boat captain had overslept) we jumped aboard praying that we weren’t too late.

“Don't worry,” said our instructor. “If we arrive as the other groups are finishing, we’ll have the sharks to ourselves!” I hoped she was right.

Reaching the reef, I glimpsed a dark shape. Above it, bubbles. Damn! Divers, not threshers.

The group were all staring intently into the reef and, following their gaze, my heart sank as I realised that the water in front of them was clear, blue and… empty.

They were looking for the threshers, rather than at them.

We swam past a meadow of garden eels, arching and flexing like dancing cobras, to find a quieter patch of reef where we wouldn’t be sharing any sharks we might find with too many other divers.

I snuck a look at my computer to check that my no-deco time wasn’t ticking away too fast. At around 26m, bottom-time was limited.

Then it materialised: a huge, wide-eyed cartoon of a shark. Whoever said sharks are scary had clearly never seen a thresher.

With its big eyes, small anxious mouth, rounded body and elegant trailing tail, the only word fit to describe it was friendly.

Despite its size, exaggerated by its ribbon tail – around the same length as its body – it had an endearing quality about it. I could watch its saucer eyes and gasp of a mouth all day.

But before my astonished bubbles had dwindled and burst, another shark flashed past in the background, vanishing almost before I’d seen it approach.

And they just kept on coming – shark after shark – as we hovered, rapt, above the sand. The next one was curious; inching closer and closer until I was concerned that it might bop us on the nose.

After several more sharks had started to attract a crowd of divers, we swam onto another section of reef. This new patch of sand didn’t change our luck, and the sharks kept swishing past – so many that we lost count!

With deco approaching as quickly as the next inquisitive shark, our instructor signalled time to start our ascent.

My buddy was so intent on the latest thresher that I wasn’t sure we’d be able to tear her away.

Edging away slowly, I trailed at the back of the group glancing back, in part to make sure my buddy was aware that we were leaving, but also to make sure I didn’t miss the last of the action. I cursed not being on nitrox today.

Snaking a few metres higher on the sloping reef gave us some more time and grace to explore. With a thresher still dancing in the blue it was hard to pay much attention to what was going on in front of us.

From the corner of my eye, I saw our instructor signal “two” and point under a ledge, where two morays snapped at us.

The thresher circling the divers below was too mesmerising to be outshone by a couple of eels.

“Yep, morays, OK,” I signalled back without approaching. “No, sharks,” he clarified. I spun round, imagining that a thresher might have crept up behind me.

“No, here!” He pointed back under the ledge, laughing through his mask. Intrigued, I glided closer and squinted behind the morays.

One – no, two – baby whitetips were huddled in the dark. I learnt later that there were three or more. Still transfixed by the threshers, my buddy had missed the whitetips.

The curse of an incredible dive is that the sands of your dive-computer slip away sooner than you want. That was the case today.

We had moved to a higher point on the reef, but time was up. We were out of thresher territory, and I tried to stop myself reliving the dive in my mind as we meandered towards the mooring line – I mean, if I had, I would have missed the seahorses. Both of them. And the pipefish. And the marbled sting ray.

It was only around 7am when we returned to shore, and my time on Malapascua was up. But what a way to start the day!