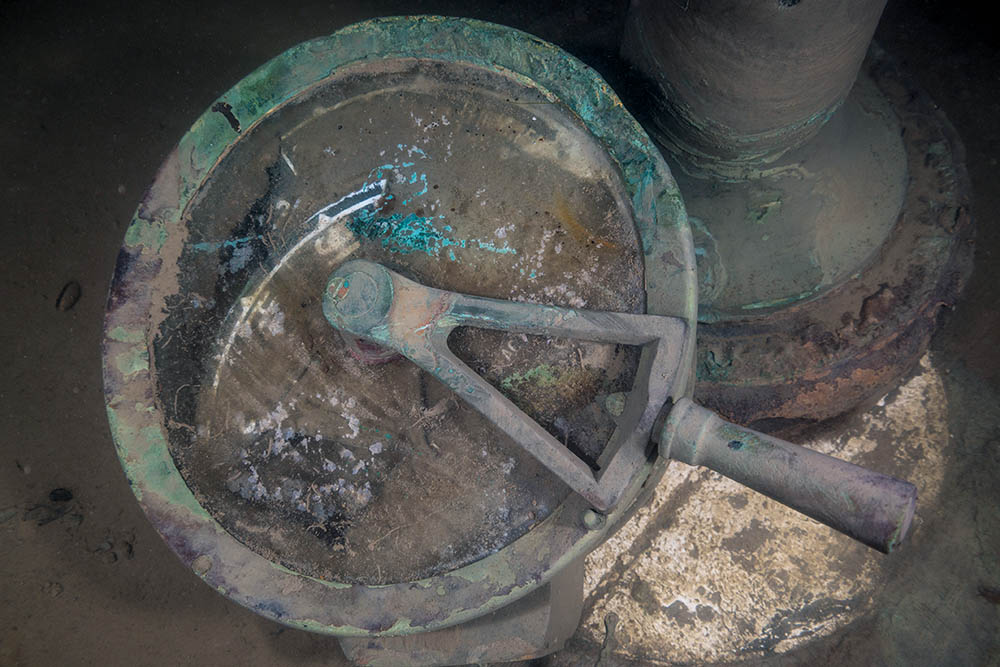 The telegraph head on the Notung.

MANY YEARS AGO, in a galaxy far far away, when we could not instantly access information at our fingertips any time of the day or night, I read an article about diving in the Baltic.

A few years (coughs, 20…) later, I find myself leading a group of nine people from the UK to dive some of the wrecks in and around the Åland Islands.

Åland spreads out from the east coast of Finland towards Sweden’s west coast, bridging the gap between the Baltic Sea and the Gulf of Bothnia. It’s an autonomous part of Finland, but Swedish is the local language, and it would be fair to say that the region has some history.

The Baltic Sea holds massive appeal for the avid wreck-diver. Its still, dark, brackish and anoxic depths offer an almost perfect environment for the preservation of sunken vessels.

Our diving in Åland would be on a mix of wartime wrecks and sailing ships from a time when the islands were the windjammer (sailing barque) capital of the world.

During the week our main dives of the day would be in the 25-65m depth range. We had all elected to dive closed-circuit rebreathers for the week, but the dive-centre is very well set up for open-circuit diving, and the dives could easily be done blowing bubbles.

Having arrived late on Saturday night, Sunday morning was all about breakfast and kit-prep. We would dive just the once in the afternoon.

The Plus is one of Åland’s famous windjammers, a three-masted sailing barque built in 1885 and wrecked in 1933.

Ship-owners in Åland clung to the days of sail longer than most, buying up cheap sailing ships as the age of steam took over, and sailing them on the famous grain routes from South Australia back to the UK’s Lizard Point. This continued until just after WW2!

Divers familiar with Salcombe might recognise the name Herzogin Cecilie – this wreck was an Åland ship, and the salvaged accommodation now forms the centrepiece to the maritime museum in Mariehamn, Åland.

Plus had been trying to return to Mariehamn in time for Christmas, but with no pilots available the master elected to make the final passage unaided, and wrecked when almost home. The vessel makes a convenient local dive, and a sheltered one if the weather is inclement. We dived it on the first and last days.
Arriving at the stern in 20m, the first thing that strikes you is the timber – lots of it! I made my way quickly to the bow at 35m, looking for the ornamental decoration on the bowsprit.

This was to be the theme for the week’s diving for me, detail. Lots and lots of detail – the level of preservation is out of this world.

Plus’s three masts represented a hazard to navigation, so were blown off several metres above deck level, though as we swam along the deck they were, to all intents and purposes, still present and correct, with much of the rigging in place.

Planks may have popped out of place, but some still have the dovetail joints that make them look as if they could be pushed back in. Tools are in place in the workshop; I’m even convinced that there was still paint on the walls.

THE WEATHER DICTATED that we needed to head back to the Plus on the last morning before an afternoon of kit-drying. I had struggled to envisage what I was going to do after having such a great dive on it on day one, but after a week of diving and now having my Baltic eye in, it turned out to be even better second time around.

The phrase “It’s Baltic over there…” doesn’t exactly instil a warm feeling, but we were all pleasantly surprised by the conditions we found.

We had gone fully prepared for very cold conditions, but visiting in August really helped with water temperatures.

The surface to approximately 12m was 14°C, then from 35-40m it was 8°C, and 4-5°C below 40m. So warmer water than expected for deco was a massive positive, but the trade-off was that the water was greener than it might have been, and the vis more like that we’re used to at home.

Arriving at the bottom of the shotline in 50m to dive the Balder, I knew that coming to the Baltic had been a good idea. The shot was tied off to the fallen aft mast, and immediately visible was the balustrade that separated the cargo area from the crew area, with the steps into the cabin below in place.

The aft deck is the signature area of the Balder, with the main helm still upright and intact, and the bell sitting on deck nearby. Most of my dive was consumed here with my camera, leaving only a little time for a quick swim around the forward accommodation area, where there are still chairs, trestles, bottles and the remains of the navigation lamps.

Time was up all too quickly; though not as quickly as heading back for port at 54 knots, the fastest I’ve ever been in a dive-boat. It was a great day!

The wrecks benefit from the very still, almost fresh anoxic water. Creatures that would normally destroy wood, and oxygen that would encourage rusting, are in short supply. Where the savage Atlantic can roll the boilers of a once-grand ocean liner around the seabed, these wrecks are left in peace.

The other danger to wrecks is, of course, from divers. All Åland wrecks are “look only” – there is no removal of artefacts, and this is not a new policy.
Compared to, say, Portland, diver numbers are very low, and the wrecks have been no-take for as long as anyone can remember. The government is keen to protect its heritage and its tourism.

Notung was a first for me – I’ve never dived anything sunk by Russian action before. She was making her way from Turku during WW1 when she was surprised by Russian bombers. They attacked with bombs and torpedoes, one of which struck her stern and sank her.

The crew took off in lifeboats and came under machine-gun fire, but legend has it that they escaped across the ice and snow, hiding beneath white sheets when necessary.

The wind was in a bad direction from our home port, so skippers Mattias and Fredrik suggested hauling the boats out and launching them on the other side of the island, where we would be able to dive in more sheltered conditions. Winner!

It would be fair to say that the Notung blew my mind. This steamship, built in 1882, is similar to hundreds sunk around the UK – except that the wreck looks as intact as the day the vessel sank.

It sits in an area of poor visibility – I would estimate it at 1-5m, depending on the part of the ship – and is very dark.

Time spent swimming around the wrecks of Truk proved invaluable here, and I was able to get my bearings quickly and head for the bridge.

Which is like a museum, with compass, helm and rudder-indicator in place, the bridge bell fallen to the deck and the telegraph (complete with face) to the side.
Moving aft from the bridge with some difficulty, we could see the upright funnel and the steam-whistle in place.

Immediately in front of the funnel is the signal-room, another compass and the aerial on the roof, and to look into the signal-room you just open the door.
Blow my mind? I’ve had to pour a calming gin as I type this!

WHILE THE MIDSHIPS section is quite broken, the bow is perfectly intact. The forward bell sits on the anchor- winch, where it has fallen from its mount.

The bowsprit points proudly out, and the name is still carved into the ship’s side (though some of us, ahem, missed that). The forward cabin is there but collapsed.
The longer deco gave us time to absorb the sights we had seen before the frantic and enthusiastic discussions of what we had seen began back on the surface.

• Finn Air flies from either London Heathrow or Manchester to Helsinki and then onwards to Mariehamn, Åland.

The regional flight pushes the price of the travel up, and return flights were in the region of £500-550 depending on when booked, and quantity of baggage. Kevin broke his return journey to visit Helsinki.

A realistic door-to-door budget for this trip diving rebreathers is £2000-2500 – an A-list trip costwise, but it is A-list diving!

I SPENT AN HOUR on the Notung with a maximum depth of 45m, but it is just not enough, I didn’t even scratch the surface. I’m told that on very rare occasions the visibility clears to 10m, so it would be well worth repeating the dive in the hope of experiencing that.

I’m quite lucky with the diving I get to do, and I tend to worry if I’m told we’re off to a wreck that’s only 50m long, and I did think “hang on” at that point.

Weather had dictated the direction in which we needed to go and it was a late start, but what a gem!

Hindenburg was an icebreaker tug (it gets quite cold in these parts) and she also undertook mine-protection work. Naturally, it was a mine that sank her.

We had been told to look out for the “helm glowing at us”, which sounded like an invitation to me. Sure enough, the superstructure is still very intact, and as a centrepiece the helm is indeed glowing – the lack of marine growth means that the brass still looks as if it’s been polished.

Sitting nearby is a clock, a definite first for me under water. The Hindenburg also boasts three telegraphs, a lamp-locker, steam-whistle and foghorn.

The steps down to the aft cabin still have the wood panels in place, lit by the in-place portholes – fantastic! I could go on, but I don’t have the word allowance.
Another sailing barque sunk due to navigational error, the Hindenburg rests not far from the Balder.

Sverre is a bit deeper at 58-70m, sitting in crystal-clear but black water. The shot landed in the hold area (Sverre was carrying scrap-metal items) and the sides of the ship have fallen outwards there.

We were briefed that there were two bells on this wreck, one at the stern and one at the bow, but heading for the stern. I never really got my bearings and couldn’t find the bell. With time disappearing fast, I headed forward.