As ALEX MUSTARD points out, you don’t see the sort of images that appear on this spread too often in magazines such as DIVER, as they don’t suit the format that easily. Yet the circular fisheye lens is a significant tool…

‘For my money, the fisheye is the most important and powerful lens we can use under water’ 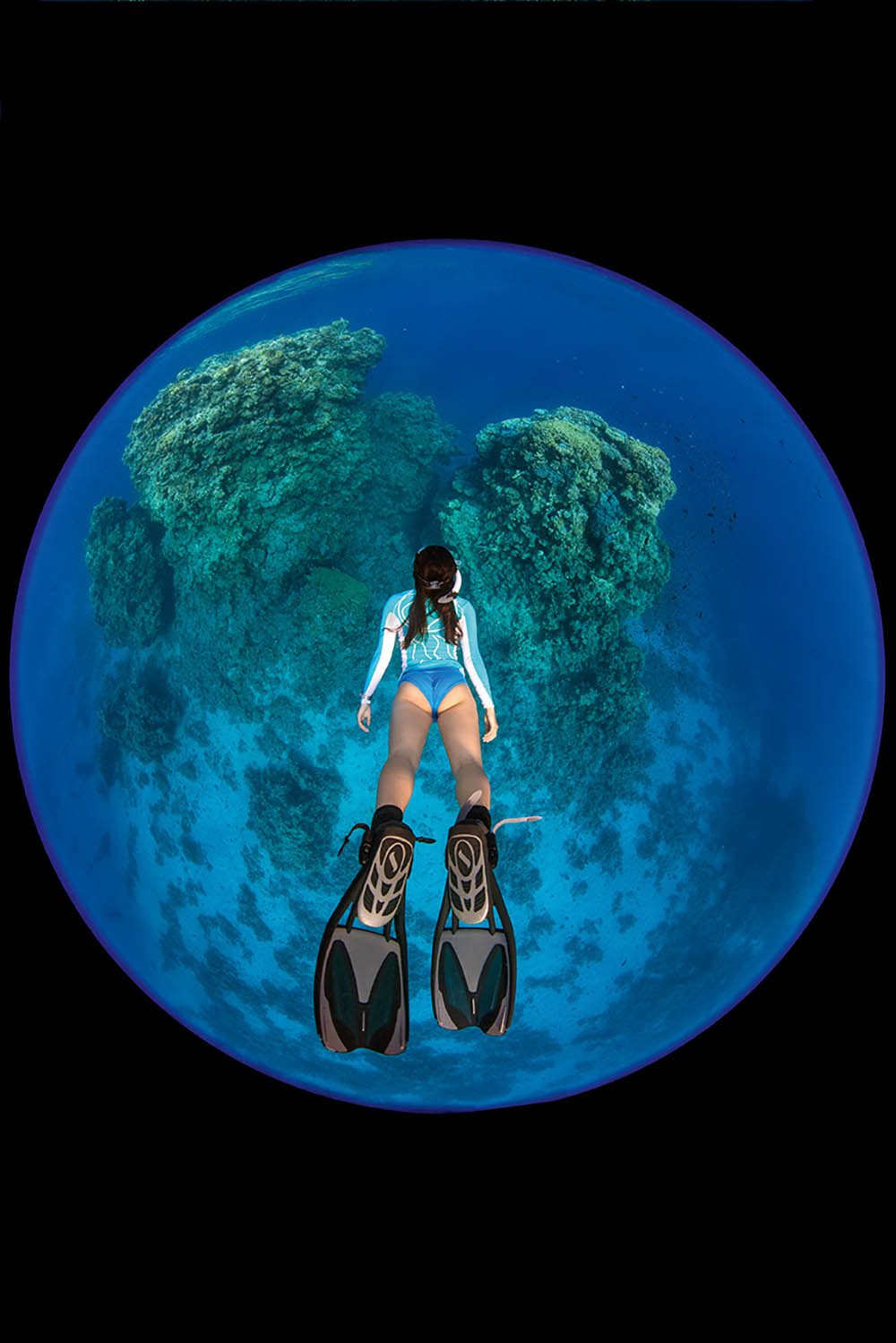 A simple image of a snorkeller swimming down towards a reef becomes more interesting through a circular fisheye. Taken with a Nikon D5 and Nikon 8-15mm @ 8mm. Subal housing. Retra strobes. 1/125th @ f/14, ISO 800.

FASHION, SO THE SAYING GOES, has nowhere to go but in circles. It’s an expression that is as true of photography as any other walk of life.

This summer season, Nikon has made much fanfare about its new 8-15mm fisheye zoom, especially because it is the first Nikon autofocus lens that can produce a circular fisheye image.

One thing is certain, it will surely make circular fisheye shots more trendy than ever.

On a full-frame camera, this lens is best thought of as two lenses in one rather than a zoom, because only the two ends of the zoom are really useable.

At 8mm the lens gives a circular image with a ridiculously wide field of view of 180˚ in all directions (it’s hard to keep your feet out of the picture).

Then at 15mm it produces a classic, frame-filling rectangular fisheye image that covers 180˚ from corner to corner.

The arrival of a new fisheye lens from Nikon is certainly newsworthy, as its last new fisheye was the crop sensor only 10.5mm from 2004, and before that it was the 16mm in 1993.

However, the 8-15mm is pretty much identical in what it does to Canon’s 8-15mm, which was introduced seven years ago.

But before I sound too blasé, as underwater photographers we should always greet any new fisheye lens enthusiastically. In the early days of the British Society of Underwater Photographers, one of the grand photographic aims was to take a clear image of a complete diver in British waters.

It doesn’t sound too hard, until you consider that there were no wide-angle lenses, let alone fisheyes! So the challenge involved designing and building your own underwater wide-angle lens. This is something that Geoff Harwood mastered in the early 1970s with his Vismaster 1 and Vismaster 2 lenses, which were circular and full-frame underwater fisheye lenses respectively. What goes around, comes around.

FOR MY MONEY, the fisheye is the most important and powerful lens we can use under water, because it offers the widest angle of coverage of any lenses, allowing us to shoot the largest subjects and scenes through the least water, giving the most colourful and detailed pictures.

By definition, fisheye lenses are ultra-wide-angles that are designed not to worry about keeping straight lines straight, and achieve their wide coverage with characteristic barrel distortion.

Not having to worry about maintaining a rectilinear image allows lens designers to concentrate on making fisheyes ultra-wide and sharp. Their bendiness limits their appeal on land, but under water, where there are few straight lines, they are transformed from niche lenses to workhorses.

Furthermore, they work much better with dome ports than standard wide-angle lenses, giving sharp details into the corners of the frame.

Circular fisheye lenses have a risibly wide field of view, seeing 180° in all directions – that is, half of the whole world around you. So it’s very easy to get unwanted elements in the frame, such as your fins, bubbles and even your fingers on the camera’s shutter!

Before pressing the shutter, quickly scan your composition to ensure that there are no UFOs!

Their party piece, however, is close-focus wide-angle, classically described by Brian Skerry and Howard Hall as “the most beautiful type of photograph that can be made under water.”

Their ability to focus close allows us to fill the frame with medium-sized subjects, and their ultra-wide angle of view makes them pop out of the background by forcing the perspective.

Circular fisheyes are best thought of as an extreme version of the standard fisheye, and they are challenging to shoot well. I want to use the remainder of this month’s column to run through the techniques for getting the most from this unique optic. 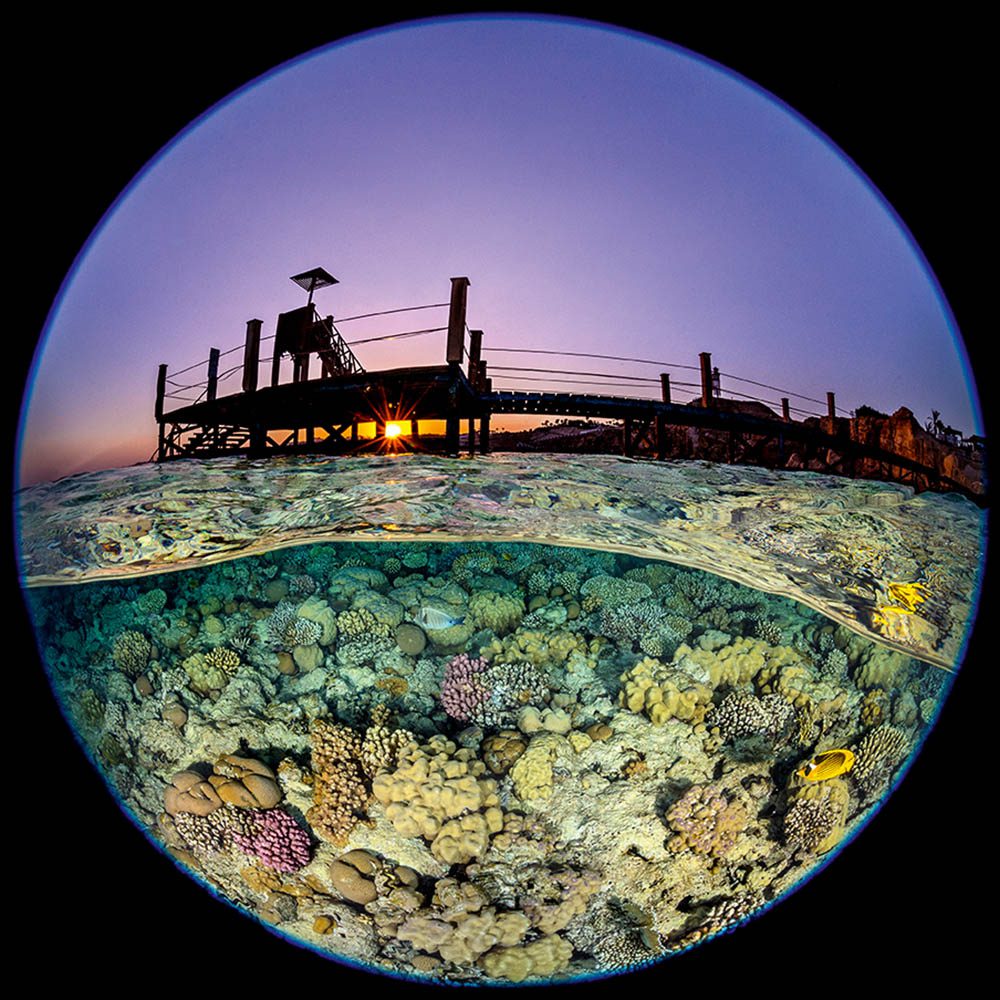 For the circular composition to work, the whole frame needs to be correctly exposed, otherwise black areas will blend into the background. Taken with a Nikon D5 and Nikon 8-15mm @ 8mm. Subal housing. Retra strobes. 1/250th @ f/22, ISO 800.

RULE ONE IS OBVIOUS, but I have seen the problem catch out so many photographers down the years that it definitely deserves stressing.

To use a circular fisheye under water we must remove the lens’s hood and the shade from our dome-port – otherwise the lens will see them!

Some dome-ports have moulded plastic shades that are glued in place, and cannot be removed. Check yours before buying a circular fisheye. But many are secured with small Allen-key bolts and can be removed, assuming that the bolts haven’t been locked in place by a build-up of salt. Removing dome shades greatly increases chances of scratching our dome-port, both above and under water, so take care.

Sadly, there are no magic numbers that I can tell you to plug in to work for all cenote shots. First, cenote light levels are very changeable. Second, how much each of us will adjust our aperture, shutter speed and ISO from our normal dive settings depends on our camera.

For example, newer cameras can be pushed to higher ISO values than older ones. Full-frame cameras can use higher ISOs, but also need the aperture closed more for acceptable corner sharpness.

Circular fisheye lenses are easiest to use when shooting available light, and are well suited to photographing big animals, scenery and wrecks. Try shooting straight down to get an evenly illuminated subject, or straight up to capture a silhouette and the whole of Snell’s Window.

Being forced to dive without a dome shade is one of the main drawbacks of the 8-15mm zooms. Furthermore, the lack of a shade and a lens-hood increases flare when shooting into the sun, something from which the new Nikon does suffer.

Lighting circular fisheye lenses is similar to working with a standard fisheye. The most important thing is to keep our strobes pulled well back, so that they don’t poke into the frame.

Circular fisheyes should not be over-used, not least because the shape of the images makes them hard for publishers to use.

That said, they are a valuable tool to have in the camera bag, especially when looking for a way to create something different with a common or ordinary subject.

As a guide, start with them pulled back so that the front of the strobes is in line with the back of the housing. Always use diffusers to help them cover the wide angle of the frame, and to give a more even illumination of the subject.

Balanced-light images are the way to go, because without ambient light the circular frame won’t show up. In shallow water or when shooting wrecks or pelagics, we can shoot a circular fisheye effectively using only available light.

This can be a problem when shooting inside wrecks and caves, and also when shooting scenery, where the bottom of the frame is dark, deeper water. There is no single solution; it is just something to guard against when planning our shots.

Although circular fisheye shots are likely to be very much in vogue following the introduction of the Nikon lens, it’s valuable to remember that this is for niche images. Used sparingly, it can be very impactful. Use it too much, and it will bore and frustrate the viewer.

Remember that circular fisheyes are nothing new – in fact, all early fisheye lenses produced circular images, and photographers were very excited when a fisheye was finally released that filled the frame and produced a much more useful rectangular image.

Circular fisheyes are currently on trend, but we can be just as sure that they won’t be in fashion forever. 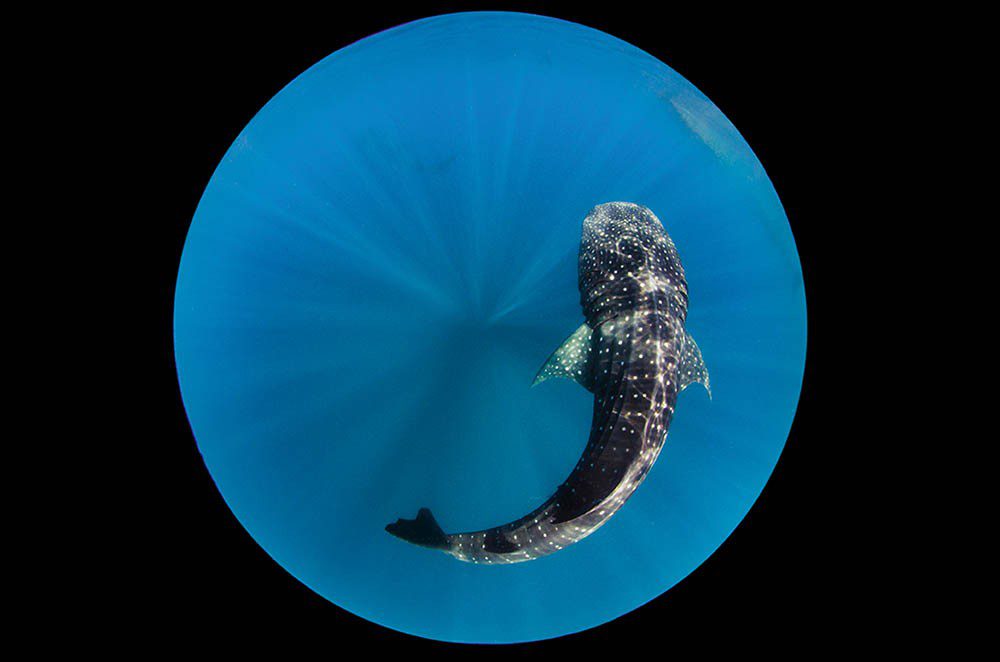 The wide coverage of a circular fisheye makes it well-suited to large subjects, such as big pelagics and wrecks. Taken with a Nikon D7000 and Sigma 5mm. Nauticam housing. No strobes. 1/125th @ f/11, ISO 200.