Welsh cave-diver MARTYN FARR wrote his book The Darkness Beckons back in 1980, and its two editions became bibles for practitioners of the sport, but it had not been updated for 26 years – until now. In this excerpt from his chapter on Australian cave-diving, the author looks at one of the most exciting of recent developments. Photography by RICHARD HARRIS 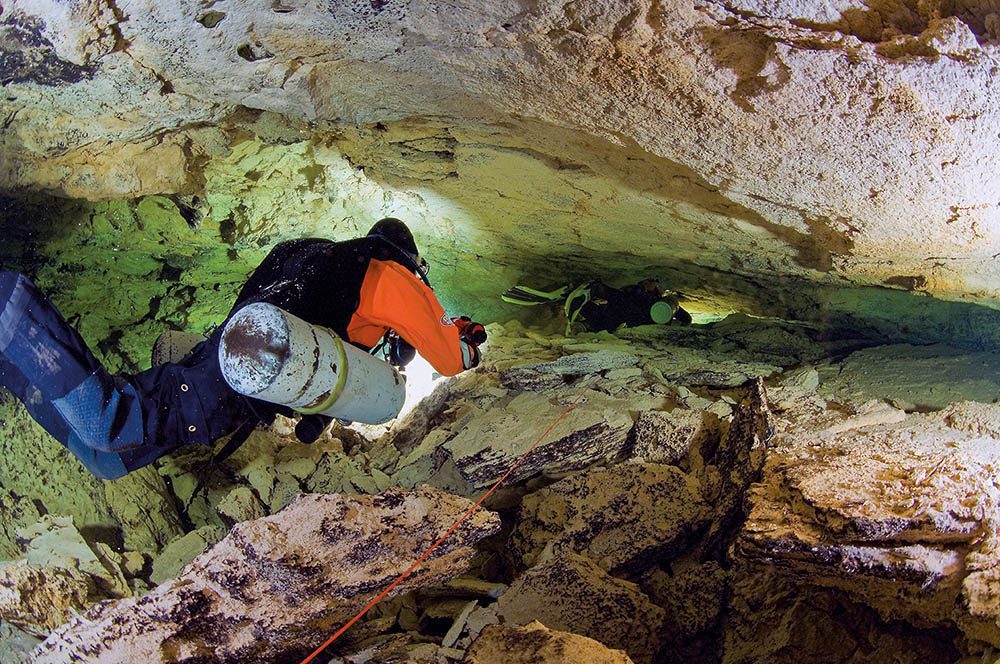 SINCE 200 THE THRUST of exploration and the most outstanding discoveries in Australia have been made on the Roe Plains, adjoining Nullarbor.

This extensive lowland has a number of flooded caves, including Burnabbie, Nurina and Olwolgin. With entrances originally recorded by dedicated caver Max Hall, the caves had been known for a number of years but had long been overshadowed by the spectacular caves on the main Nullarbor Plain.

It was in 2001 that Paul Hosie, a leading activist from Perth in Western Australia, turned his attention to the Roe Plains. The track leading to these sites is poor and in the case of Olwolgin there is a 1.3km walk through the bush to reach the entrance. From here it’s a relatively easy scramble down a slope to access a small pool lying almost within the daylight zone.

Initial reconnaissance revealed a low and silty passage where Hosie ran out of line. In January 2002 he returned alone for a further look and was amazed to find that the underwater tunnel just went on and on, into the largest tunnels then known beneath the Roe Plains. In February 2002 the total length of the passages was to reach 1.3km.

Lying just 10m or so beneath the surface, the shallow phreatic caves of the Roe were different to any other caves in Australia.

Situated at lower altitude and nearer to the coast than the renowned sites such as Cocklebiddy and Weebubbie, these caves were to present haloclines, and other very unusual features.

The walls were often white, covered in mats of organic growth which peeled away when disturbed. At one site there was an accumulation of bizarre “jelly-like” bacteria living on the cave floor.

ON A VISIT IN October 2010, Richard Harris described a section of Olwolgin Cave: “Babylon Lake – so named because of its hanging gardens – contains superb examples of tree roots draped like a veil into the crystal water. The atmosphere above water is so toxic that a single cautious sip left me breathless with a momentarily scalded throat.

“On the water float the corpses of numerous dead white centipedes and spiders. It’s hard to imagine a more inhospitable place, and yet it’s one that clearly supports its own fascinating eco-system.”

By Easter 2010 Olwolgin cave had divulged 2700m of upstream passage. But things were soon to change.

On a trip to the cave in October 2011, Hosie decided to look at a small, unexplored pool near the entrance.

For the sake of survey completion this second sump had to be checked out.

When he returned to camp that afternoon it was with an empty reel. He had passed a sidemount restriction and laid 100m of line in an ongoing tunnel.

That same evening he returned with his regular buddy, Alan Polini. Both were equipped with twin 7-litre bottles. He described the dive in camp later as “diving towards the biggest area of darkness”.

The next morning Ken Smith and visiting Bahamian diver Brian Kakuk were “given the nod” and, naturally excited, promptly accepted the generous lead offered to them.

Smith could not believe his luck when he clipped on to the end of the line at 300m and continued into the blackness.

All too soon his reel was empty and Kakuk attached another. The pair mapped 600m on their outward dive.

Smith commented: “I was so overwhelmed by what we had just done that I was shaking with excitement, so much so that I couldn’t hold my pencil steady enough to write down the survey data, so Brian had to do it for me.”

A rapid, rolling assault ensued. Richard Harris and Grant Pearce went in next. Using a stage bottle apiece, the pair reached more than 800m from base.

Not surprisingly there were side tunnels and the further the teams progressed the larger and more complex the site became.

Thankfully the passages remained fairly shallow. In total about 1400m of line was run into the network within the space of 36 hours.

On a trip at Easter in 2012 an enormous room was discovered by Pearce and Chris Edwards at the furthermost point.

The chamber, 130m long and 30m wide, was later named Grand Central, as a number of other passages were soon found to join at this point. Most significant of these was Ag’s Dreamtime (named after Agnes Milowka, who had died in Tank Cave the previous year), which ran parallel to the principal passage. Spurred on by the spectacular discovery, Hosie and Polini set their sights upon a south-west continuation. Polini recalls their next advance:

“It was a good thing that we each carried a compass; we needed them, as the sheer size of the Anzac Parade tunnel made the high-powered lighting systems we had virtually useless.

“Don’t get me wrong; it was great to be laying line in what is and could quite possibly be the largest unexplored passage I will ever experience, but a shame that we could barely see the walls.

“Just like floating through space, we unloaded the line off the reel screaming and hooting at each other.

More than 600m of passage was explored and surveyed. Hosie again:

“In three days of highly focused exploration diving, Alan and I spent 16 hours each under water. This enabled us to add 1800m to the surveyed length of the cave and extend the maximum penetration distance to over 1250m – exhilarating, but exhausting indeed.”

AT EASTER 2013 Hosie returned and discovered another major lead, the Easter Extension, and 500m of passage trending south-west. In total the trip amassed 1700m of new passage.

Later that year the downstream passages were to total 7200m and the two Olwolgin sectors added together gave a grand total of 9900m.

At one point a complete skeleton of a dingo was located on the passage floor, close to what once must have been an ancient entrance to the cave.

A young newcomer to the team, Ryan Kaczkowski, soon proved his determination. In November 2013 he pushed through a small hole to find the main continuation of the Easter series and another 500m of passage.

The “end” was becoming evermore distant. Dive times were seriously escalating, with time away from dive base now in excess of four hours.

As ever the equipment being used required constant re-evaluation. This was no place for conventional back-mounted equipment.

Their basic configuration was to consist of side-mounted rebreathers on one side and 100cu ft open-circuit bail-out on the other.

Hosie had constructed three home-made rebreathers in the years prior; his buddies soon developed their own sets.

With a multitude of unexplored passages the October 2014 expedition was destined to take another giant stride forward. Thursday 9 October was a very memorable day. Kaczkowski relates:
“I was using a single Kiss Sidekick side-mount unit with plenty of gas bail-out staged through the cave. After looking around the “end of the line”, it reminded me of just before the Grand Central area, so I started poking upwards.

“I could see that there was a large rock choke above me, so I shuffled rocks around until I could get them to fall down and into the fissure below. It silted out so I couldn’t see but could feel the hole was getting larger and my arm could feel that there was definitely empty space above.

I dreamed about breaking through that night.

“The following morning… I went out solo and started working with the tools on the hole, which I found quite difficult in a vertical position on a sidemount breather.

“I could just fit my head through and could see it was a large flat room, but did it go? After another half-hour of “gardening”I managed to get it just big enough to shuffle through with my bail-out pushed in front.

“Wooooo hoo!… big and plenty of black unknowns. I stopped for a few moments to settle my heart-rate down (I was a little excited) then grabbed the reel and the line laying into Blood Moon Passage began.

After I got back to camp I told the guys: “We’re gonna need more bail-outs.”

THE BREAKTHROUGH INTO the Blood Moon Passage was subsequently to yield about 2000m of additional passage. Hosie outlines the current situation:

“For the two eight-hour dives I did to explore and survey side passages in the new extension, one unit was used as a stage CCR [closed-circuit rebreather] for the two-hour each-way travel to the end and then I switched to the primary unit, which was used for exploration up to 1000m from the last staging point.

“Most of the time we aim to dive as pairs – particularly when pushing main conduit leads (one looks for the way on, the other lays line), but when exploring and surveying side-tunnels we tend to travel through the cave to the destination areas together and then split up to explore independently… It was a sensational trip!”

In January 2015 downstream Olwolgin had 11,000m of surveyed passage with a maximum penetration of 2814m, and ranks as Australia’s longest underwater system.

With the exploration of the downstream sector nowhere near complete, it is clear that this saga has a long course to run.

And with their unique eco-systems, it is also clear that these Roe caves offer immense scope for future scientific research.

About the new edition

Martyn Farr began cave-diving in 1971 and by 1981 had set a world-record for undersea cave penetration in the Bahamas. In the UK he became known for his 1977 explorations of Wookey Hole, and the first subterranean traverse of Llangattock Mountain in Wales in 1986.

The Australia excerpt here comes from the 2017 edition of Farr’s book The Darkness Beckons: The History and Development of World Cave Diving, which is published by Vertebrate Publishing, v-publishing.co.uk

The book was first published in 1980 and updated in 1991, but the current edition is three times the size of the original book and embraces the many global developments and achievements in the sport in more recent times.