The name Barbados evokes images of lush sandy beaches, palm trees and rum shops and some 35 dive-sites are listed there. But why, asks freediver MARCUS GREATWOOD, is the Caribbean island not in the list of top diving destinations? 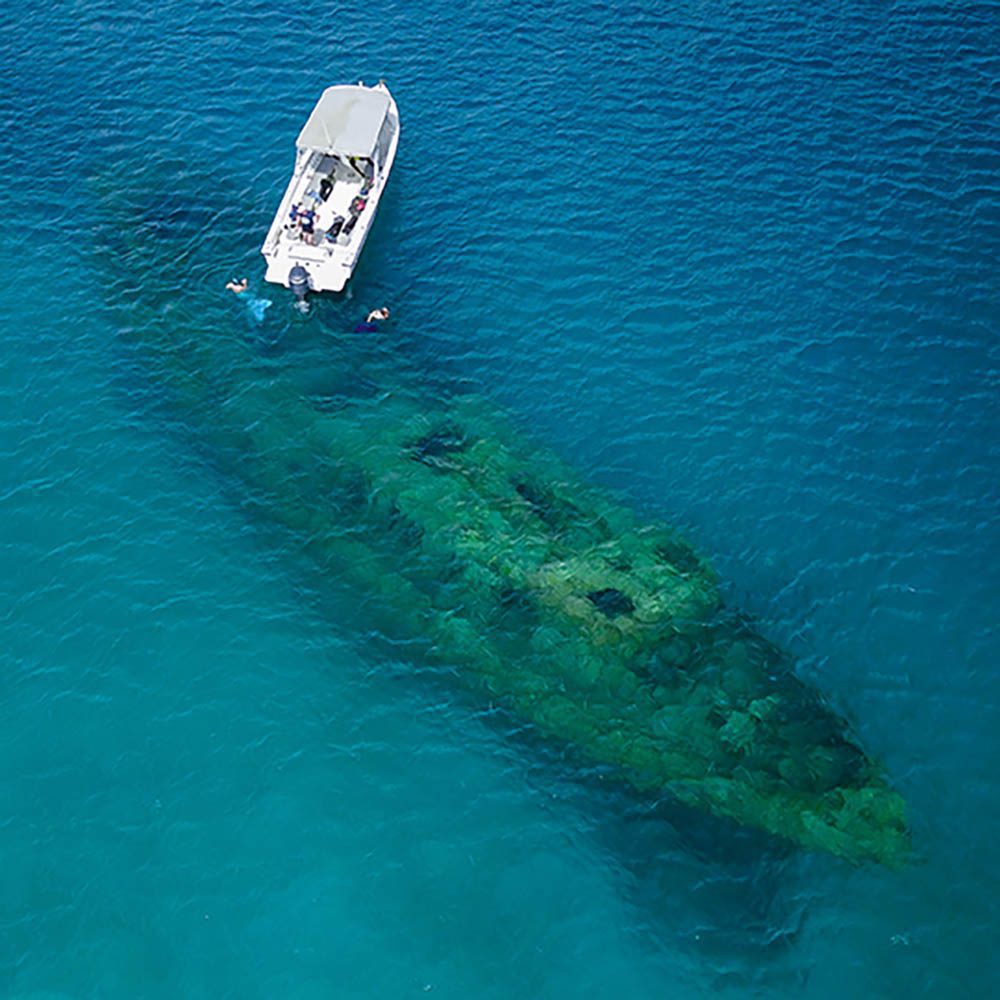 Dive-boat above the wreck of the Eillon in clear Carlisle Bay.

we met up with the guys from Reefers & Wreckers, boarded its spacious dive-boat and set off to our first dive-site, Dottins Reef, a popular drift dive. Archie, the skipper, dropped us on the north end of a mile-long offshore reef with a buoy and short rope.

The crystal water offered amazing panoramic views for the two of us in the water, with sponges and corals as far as we could see. This should have been a dream come true, but as the current drew us gently south, allowing us to dive and drift almost effortlessly past the sea plumes, whips and huge tunnel sponges, we were astounded by the almost complete absence of fish.

Back on land, we decided to do a second dive straight off the picture-postcard beach of St Peter’s Parish – a perfect snorkelling spot, overlooked by small hotels, shops and cafes. Again the water clarity was amazing, but the lack of fauna on the submerged rocks was a bit creepy. We were more than a little upset after our first day’s diving.

michael mahy, Reefers & Wreckers owner, all too aware of the problems that overfishing is causing the island, suggested a dive under the Arawak Cement Pier to the north.

An industrial site used to load cement onto ships for processing off the island didn’t sound like the ideal holiday-dive location, but Michael assured us that it would be worth it.

So we cruised up the coastline, weighed anchor and sank overboard into the deep blue that surrounded the pier.

What a revelation! The pier’s long legs gave a surreal sense of an underwater forest. These massive stanchions teemed with fish, and colourful giant sponges created an array of shapes and textures in the streaming sunbeams.

With a maximum depth of 9m the location could be described as a freediver’s play park. The sandy seabed reflected the light and accentuated the shadows in which the shoals of fish hid, the huge vertical structures slashing through this 3D landscape.

The pier has been known to hold long-snout seahorses, we were told. Unfortunately freediving is not the ideal way to search for such elusive creatures, and we were unlucky in that respect.

The paradox of the situation hit home; here we had come to an island paradise to find nature’s havens and we were now creeping around in the shadow of an industrial site, picking among the detritus of the terrestrial inhabitants. Still, I would recommend anyone to seek out and dive this site.

On the dock Archie, who had until now spoken not a word to us, motioned that I should speak to a dreadlocked guy dekitting his boat next to us.

I wasn’t in a particularly sociable mood, but Archie was insistent: “You really should go and speak to him!”

“Ahhhaa, finally someone has noticed!” It turned out that we had run into Andre Miller, who has spent the past 20 years trying to raise awareness of the plight of Barbadian reefs.

Andre, who, it turned out, was Michael Mahy’s cousin, had been transplanting coral taken from what would soon be a building site, something he now does almost full-time. We agreed to meet up the next day for a longer conversation.

As we parted he said: “If you want to see how the reefs should, and could, look, dive Carlisle Bay in the morning.”

carlisle is a wide-open bay. Tourists and locals mingle on the flat sandy beaches, eating frozen snow-cones dripping with sugar syrups. Reefers and Wreckers met us in the shallows and punted the few minutes out to our dive-site, which turned out to be particularly suited to freediving.

We started on the Eillon, a 33m cargo ship sunk in 1996 in just 16m as a diving attraction. I have seen the outlines of many wrecks on approach, but rarely the whole wreck from the dive-boat, including the clouds of fish across the deck.

The water clarity combined with the sandy bottom reflecting sunlight gave an awesome overview, and the lack of current allowed us to move as we pleased around the wreck, exploring the open hold and well-lit interior.

This is where the fish are at, covering all six of the wrecks in this tiny area just south of the capital Bridgetown. We were struck not only by the amazing diversity of life (frogfish, seahorse, ray, barracuda, octopus, reef squid, mackerel and moray eels) but the approachability of the fish.

This was clearly a safe haven for marine life – I would go so far as to describe these fish as friendly! I had never experienced close encounters like this before except where fish-feeding was commonplace, and in this area it was prohibited.

A group of scuba-divers eventually joined us and, thinking that we should leave them to it, we drifted a few metres to the Bajan Queen, sunk in 2002, and instantly thanked the scoobies for giving us a nudge to move on.

This Bridgetown harbour tugboat is a freediving playground – the only issue is visibility. Too many fish means that you can’t see the wreck! The corals are incredible considering how young this artificial reef is, and being so shallow the colours are vivid. Penetrating the wreck was easy and safe (though for experienced divers only) as it had been cleaned thoroughly before sinking.

buoyed up by our diving in Carlisle Bay, we met Andre in the afternoon. He graduated in marine biology before spending some years working for the Barbados government in the Coastal Zone Management Unit (CZMU), and then became a scuba-instructor and coral-transplant expert.

He explained that the success of Carlisle Bay as a tourist attraction was a testament to the principle of marine parks – then surprised us by saying that it wasn’t a “real” marine park!

Fifteen years before, after fruitless years of trying to raise awareness of overfishing, Andre and some co-conspirators took things into their own hands.

They put up no-fishing signs and encouraged the locals to observe an unofficial marine-park status. They had created a marine park – by themselves.

The fish sanctuary we had experienced in the morning had been created unilaterally, simply by the act of putting up signs declaring the area to be a marine park!

As we drove through the picturesque village of Six Men’s Bay, with its shacks, market stalls and rum-shops full of locals playing dominoes, we could see how the attractions of Carlisle Bay, a few miles to the south, could have given tourism in the area a shot in the arm.

Andre told us that in the early days it had been a constant battle to stop the fishermen, but that now, with people coming to see the fish in their natural environment, the fish stocks around the marine park were increasing.

back at the port, Andre dropped a bombshell: “Today the Barbadian government officially recognised Carlisle Bay as a marine conservation park, with a commitment to extending it to a large proportion of the west coast.” The date was Friday, 13 April.

It’s hard to describe my emotions. Twenty-four hours earlier, our group of freedivers had been despairing about the state of the oceans. Then, suddenly, it seemed that we happened to be on hand to witness Barbadian history in the making.

The news came out of the blue. The government had legislated to protect and improve the eco-systems we had come to write about.

It was humbling to be standing with the man who had fought so hard over the years to bring the change about.

According to CMZU Director Dr Leo Brewster, Barbados is now one of the few Caribbean states with legislation governing the protection of marine areas, and he says that the government intends to extend the concept.

There is a long way to go, but at least a start has been made, and with the right support the project will continue and expand. Barbados has the hotels, restaurants and friendly residents – in the future, we hope, it will have protected dive-sites to match.