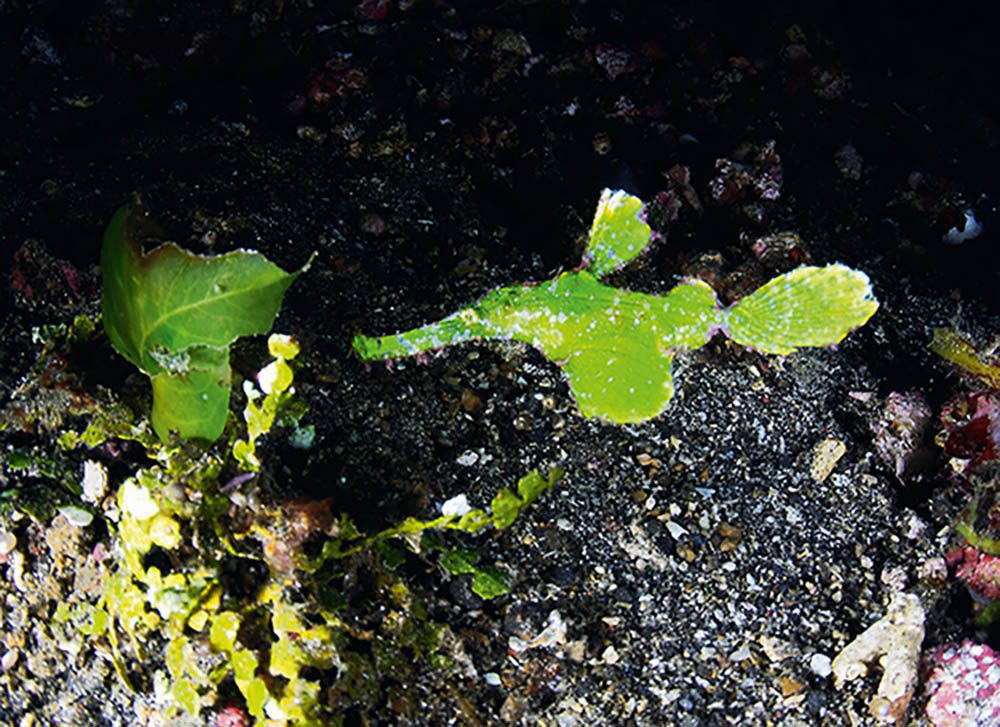 These creatures were all found on the deeper slopes of the site, which is pretty barren except for the odd piece of debris moving across the seabed with the current.

There are a few solitary patches of weed and sponge around, too, and it's there that the seahorses can be found. Not only were the histrix and kelloggi to be seen there but, on closer examination, I could also see that close relative of the seahorse, the ghost pipefish.

Ghost pipefish are much smaller than those two seahorse species, and merge in so well with their surroundings as to be almost invisible.

I found Solenostomus halimeda blending in with the halimeda plant, the ultimate camouflage for this species of pipefish, and just feet away were a pair of Solenostomus cyanopterus, more commonly known as robust ghost pipefish.

Last, but by no means least, came a lone straight-stick pipefish (Trachyrhamphus longirostris).

With this profusion of exotic small life-forms, it was just as well that I had a camera handy. But photographing such shy creatures can be difficult.

The seahorses turn their backs towards the lens, or snuggle in close to the weed, sponge or debris, making it hard to capture a good shot, and the ghost pipefish are exactly the same.

As soon as I would lift my camera’s viewfinder to my eye they would shift into a position calculated to frustrate me.

With a little patience and perseverance, however – and it’s important not to stress the subjects –  I was able to get a few shots in.

And there was one particular seahorse that seemed more than happy to pose for its photograph. Moving my mini dome-port to within a couple of inches of it, I was able to take a few pictures and was happy with the results.

AND THEN THE DIVE got even better. In the shallows, my guide was able to point out, in different places, two pygmy seahorses. Both were Hippocampus pontohi.

The pontohis were no longer than a centimetre, and looked as thin as a credit card. Getting a good picture of one of these was not going to be easy, because of their awkward location and a current that was starting to make things a little trickier than I would have liked.

Every time I went to hit the shutter, the seahorse would turn through 90° and I would lose it in my viewfinder.

All I could do was take time to recompose, and in the end I managed to get a couple of shots of each of the pontohis that would be worth keeping.

Seahorses are fish, with gills and a swim-bladder, and their excellent eyes work independently of each other.

This is what enables them to see both in front and behind them at the same time – small wonder it’s so difficult to photograph a seahorse!

When a seahorse finds a partner, it mates for life. Early in the morning the mating pair meet up, the female visiting the male’s territory located close by.

The male’s domain, at around half a square metre, is smaller than that of the female, which is more like 1.4sq m. On meeting, the two often change colour as an elaborate courtship dance takes place.

The male carries the fertilised female’s eggs (between 50 and 1500) inside his pouch until the young hatch two to four weeks later, depending on species. The hatchlings at once become independent of their parents.

There is still relatively little data on pygmy seahorses, which were discovered as recently as 1969 when the New Caledonian marine biologist Georges Bargibant came across one while examining a seafan in his laboratory.

The gorgonian, it turned out, was playing host to what we now call Hippocampus bargibanti.

Since then, many species of pygmy seahorse have been discovered. Their maximum size seems to be 2.5cm, and they tend to be found around the 20m mark, generally matching the host seafan in colouring.

Attempting to get a decent seahorse photograph, be it of the larger thorny variety or a miniscule pygmy seahorse, does mean having the correct lens on at the right time.

On my first dive at Tanjung Gabur I had a 100mm macro lens fitted to my DSLR with a 1.4 tele convertor, which was fine for the smaller species.

However, I felt that the best lens to have for getting nice close-ups of the thorny and great seahorses was a 10-17mm fisheye lens with the 1.4 tele convertor behind a mini dome-port.

I arranged to return to the site again to get some close-focus wide-angle shots of the larger species. Seahorses are territorial, so it wasn’t that difficult to locate them again, and I was soon capturing some nice CFWA images.

And along with all those seahorses and pipefish I saw at Tanjung Gabur, I was able to see many Hippocampus bargibanti, denise and also severnsi at other sites along the Lembeh Strait.