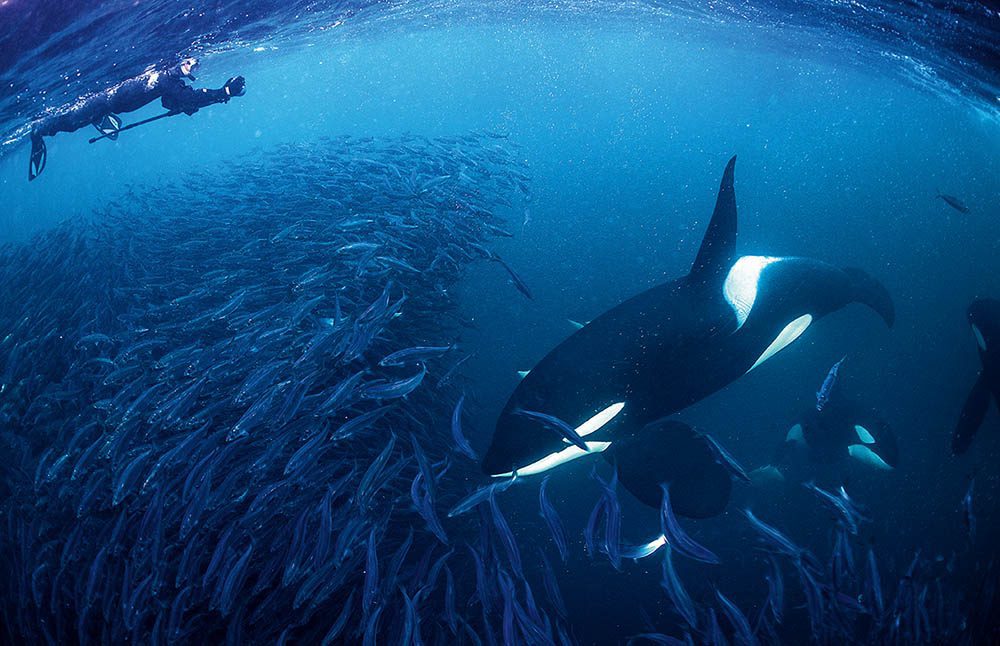 IT WAS ONLY IN THE EARLY 1990s that wildlife enthusiasts learned that in winter killer whales (Orcinus orca) could predictably be seen in the fjords of north-western Norway. The discovery spawned a local whale-watching industry.

Then the more gallant enthusiasts jumped into the frigid waters and found that it was possible to swim among these apex ocean predators.

It would be foolish to think that orcas started to frequent the fjords only in the ’90s. These gregarious predators are known to have enormous appetites, and they congregate there for an annual feast.

An adult orca devours more than 50kg of fish per day and, depending on who’s doing the counting, as many as 700-plus killer whales have been reported to turn up in the fjords with one thing on their minds: to eat, and to eat a lot.

They are there to dine on succulent Atlantic herring (Clupea harengus), each one a 30cm juicy, oily, nutritious snack. And the shoals migrate into the fjords in enormous abundance – 9 million tons of them!

Atlantic herring provide sustenance not only for orcas but for people on both sides of the Atlantic. The average herring weighs about 300g, so an estimate of 9m tons is off the charts. As such, the Atlantic spring spawning was once thought to produce an inexhaustible supply of the fish.

Blossoming at depths of beyond 100m, this layer (itself more than 100m thick) of herring dwells on the continental shelf between Iceland and Norway. Finding security in numbers and in the darkness at that depth, the herring thrive on plankton through the summer months.

They are documented to migrate to shallower water in the winter months, and science has a probable explanation for this exodus. In winter, the movement of cold currents from Iceland becomes stronger, creating a cold barrier between the herring stock and the western coast, and forcing the herring east.

Now, imagine you are a single herring among the 9m tons of your kind, swooshing around the continental shelf. Real-estate space would be pretty tight, and life could be suffocating.

All it takes is for a brave herring to lead the run into the vast fjords system of north-western Norway.

HISTORY SUGGESTS that herring and orcas have been coming into the fjords for a long time. Archived documentation from the 17th century reveals that there were so many herring that people could literally harvest them from the shore with nets.

On a cliff overlooking the Tysfjord, archaeologists have found a 9000-year-old Stone Age life-sized carving of an orca. So we can assume that they were in the fjords long before the arrival of modern man.

Change came only in our time. In 2007, the herring fail to show up, and soon the orcas had followed suit. Was the collapse of the herring stock due to overfishing, or a natural occurrence? No-one really knew, but it was bad news both for the orcas and for the tourist industry.

Since then, we have been scouting for locations with good probabilities of interacting with the orcas in their own environments. There are several places in the world where they can predictably be found, but interacting with them is strictly regulated and, in most locations, prohibited.

We have seen them in Australia, South Africa, New Zealand, Sri Lanka and the Galapagos, but the sightings were at best random or fleeting.

Anecdotal news came in the winter of 2012 that the orcas had once again been sighted in the Norwegian fjords, in the vicinity of Senja and Tromso. The herring must be back!

Since then, both whale-watching and fishing-boats have been back in business, tracking the herring and finding the orcas. The 2013/2014 season was successful not only for the fishermen and tourist operators, but for the fin and humpback whales as well. Just like the orcas, they too followed the herring.

So in 2015 I assembled a small team to venture to the Norwegian Arctic at 69°N, to swim in frigid temperatures with the orcas while they feasted.

We imagined a Blue Planet moment, where orcas carved out balls of fish from the herring shoal and herded them to the surface to smash them with their flukes, stunning the prey before ingesting them one at a time.

FOR MY FIRST SOJOURN with the orcas, I flew from Oslo into Evennes, right in the fjord districts of north-western Norway. I would have only five days in the water, with a one-week excursion on a solid but rusty water-bucket, the mv Sula.

I was ambitious, even though this was only a scouting mission. Working in 3-4°C water temperatures, bundled up in neck-choking hoods and drysuits in howling winds, is neither easy nor fun, especially in high latitudes where the sun seldom shines. Workable daylight from 6-13 January, even with the most advanced low-light-capable camera, is only about two hours at best.

We were unlucky. On the first night out of port, the Sula’s 8m dinghy Haarek mysteriously sank it. That had been our chase-boat for orcas.

Between the eight of us, we now had to take turns to use a rubber ducky that could carry only four snorkellers at a time in safety, giving each group about an hour’s boat time each day.

Given that each of us had paid 3800 euros for the trip, those daily hours on the ducky cost about 3000 euros!

However, we did find orcas every single day, albeit in 15-25-knot wind conditions. Because of the wind and choppy sea and the makeshift use of the grossly under-sized chase-boat, over the course of five days each group was able to jump into the sea a total of three times!

We did see the orcas in their environment, charging like black and white torpedoes through the shoal of herrings and the humpback whales, and

it was an experience that shot our adrenaline off the scale.

A moment that took our breath away came when the orcas came alongside and beneath us, just in passing. Compared to their agility and swiftness, I felt like an 80-year-old.

On the last day I was able to position myself right in the orcas’ path. The sun had retired beneath the horizon but I was in the water with orcas in the wild, at close range, in their kingdom. They are intelligent apex predators, and yet they showed no aggression.

I returned from that first trip with only five frames of barely usable pictures.

Not good enough. I made plans for a second trip in mid-January last year, and this time chartered the Malmo, run by Marlynda Elstgeest of Waterproof Expeditions.

Compared to the Sula, the Malmo was a 5* expedition enterprise.

Once again, we were to have five days out searching for the orcas, but this time starting the expedition on 15 January and departing from Harstad, two hours south of Tromsø. By starting a week later than the previous year, we gained about 30-40 minutes of light each day. And this time we saw the sun rising above the horizon, showering the fjords with glorious hues of pink, magenta and orange.

It seemed a good omen, and the first two days gave me fleeting encounters with pods of 50 or so orcas.

Then a cold front arrived, and in the following days we were beset with snow, a ghastly wind and overcast skies.

My pictures were better but, by my standards, the experience was still not good enough. I needed to return with a better plan.

My good friend Eirik Grønningsæter, wildlife photographer and polar-region specialist, came up with an astute scheme. It involved just the two of us with an expert skipper on a small, speedy private boat operating out of Tromsø for the first two weeks of November.

The timing, it turned out, was perfect. For the first week we got up to enjoy 5.5 hours of daylight, though this diminished by about 10 minutes every day.

The weather was on our side, however, so we were able to launch every day.

For up to six hours a day we would bob or speed through the fjords, with the air temperature averaging 0˚C. Though we stayed in our drysuits, it was frosty cold.

Over the course of these days, I felt each encounter becoming more and more intense. Perhaps we were able to navigate and read the animals better than on previous expeditions, making our in-water interactions more successful.

As far as we know, Norway is the only place in the world where it’s possible to swim easily with orcas in their realm, though on their terms. After three attempts, I did return with some shots that were “not too bad”. I have the excuse I need to keep going back for more – not so much for the pictures as to be in the company of these enigmatic fellows of our ocean.

As long as 9m tons of herring migrate into the fjords in winter, I’m sure that the orcas and humpback whales will be there too.

But get there soon if you want to go – with pressure from the commercial fishers, the herring will soon vanish, and so will the orcas. In the words of the Terminator: “I’ll be back.”