Out of Air – With Plenty Left to Breathe

Out of Air – With Plenty Left to Breathe

You’re heading happily down to 30m to see the pygmy seahorse, and suddenly find that you’re OOA. What do you do? SIMON PRIDMORE shares a case history in which technical training and regular practice prove their worth 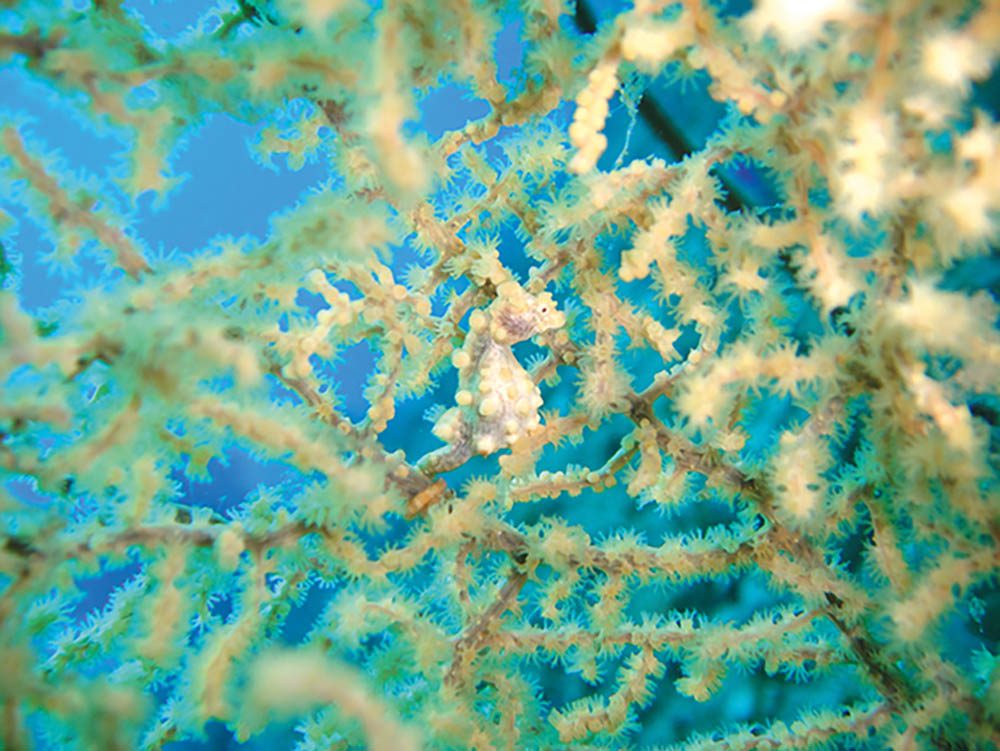 RICHARD ROLLED BACK into the warm waters of Indonesia’s Banda Sea and swam over to join his wife Florence. After exchanging signals, they descended together along the reef wall, heading for a patch of bright yellow seafans at 30m, where their guide had promised to show them pygmy seahorses.

The guide was already there below them, armed with his critter-stick and searching the fronds for the elusive little creatures. But, as Richard swam along the reef wall, gradually going deeper, he began to find it hard to breathe. It felt like he had to suck the air from his regulator.

Three or four breaths later, his regulator was giving him no air at all.

His first instinct was to check his air-integrated wrist-computer: no reading was displayed. He reached for his analogue back-up gauge and saw that the needle was pointing at zero.

Impossibly, he was out of air. He had nothing in his lungs and was feeling a desperate urge to breathe. He felt himself start to lose buoyancy and sink deeper.

He kicked hard and swam up towards Florence, slashing his hand across his throat urgently as he approached her and pointing at her octopus.

She immediately deployed it and handed it to him when he arrived. She held on to him and inflated her BC a little on sensing that he was pulling her down.

He took a couple of quick pulls on the regulator to fill his lungs, then a few long slow breaths to try to get himself under control.

He felt completely confused at what had happened, but through the fog in his brain a habit formed during his technical- diving training kicked in.

He tucked his left arm behind him and pushed the bottom of the cylinder up, simultaneously reaching behind his head with his right hand to check the status of his valve. This was a technique he had practised time and time again with both single and manifolded double cylinders.

His first instinct was to turn the valve handle backwards, that is, to open it, even though he expected it to be fully open.

He was surprised to find that, not only did the valve handle move when he wrapped his fingers around it and twisted, but it kept moving for quite a while until it locked.

His wrist computer still showed no air-supply reading, but his analogue gauge was now displaying 160 bar. He switched back to his own regulator and took a tentative breath: no problem.

He abandoned his initial emergency plan of aborting the dive, and he and Florence carried on down to look at the seahorses.

The emergency was over, but it had left Richard with plenty to think about.

HOW COULD THIS HAVE HAPPENED?

At first, Richard was bewildered. Surely, his valve must have been open when he had started the dive, or he wouldn’t have had air to breathe during the first few minutes. He dismissed the possibility that Florence might have crept up behind him and closed his valve as a prank. She would never do that.

He then thought that perhaps there was something wrong with his regulator. But it had worked perfectly at the start of the dive, and again when he had switched back to it after opening the valve.

It was only much later that he deduced what must have happened. When he had put his gear together on the boat, he was sure he had fully opened his cylinder-valve, as was his usual practice. However, on that day there was a temporary and relatively inexperienced crew-member on board.

This person had helped Richard, Florence and the other divers into their gear, and Richard had noticed him turning other divers’ air on.

Unaware that Richard had already turned his air on, the helpful crew-member had mistakenly closed the valve, thinking he was opening it. He had then twisted it back a quarter of a turn, re-opening it slightly. This meant that when Richard entered the water and began to descend, he could still breathe properly.

It was only when he went deeper that he began to have a problem. The only-slightly-open valve could not supply the quantity of air (usually 9 bar or so above ambient pressure) required to keep the regulator working.

Had the crew-member closed the valve completely and not turned the handle back a little, Richard would have found the problem while still in the shallows, possibly while on the surface waiting to descend, as he used up the small supply of air in his reg hoses. With the valve slightly open, he lost no air until he was at depth.

When most people learn to dive, they are told that, when they open the cylinder valve, they should turn it all the way and then twist it back a quarter- or a half-turn.

This advice dates back to the middle of the last century when scuba-diving was in its infancy, and it was feared that valves could get stuck or be damaged if they were left open all the way.

With today’s cylinder-valves, this is completely unnecessary. Once a valve is fully open, all you can achieve by turning the handle back is to partially close it.

There have been incidents in which divers have been so enthusiastic about turning the valve handle back that they gave themselves a similar problem to the one with which Richard had to deal.

Forget what you were told in your training. Turn your valve all the way on before you put your scuba gear on. Then don’t let anyone else touch it.

Two factors turned what could have been a tragedy into simply a useful story: both concern issues of technique.

1. Richard’s calm response, borne of good diver training. Although this was not a technical dive, the instinctive technical-diving skills Richard had learned came in very handy.

2. Florence’s readiness to assist. A new diver then, she responded like a veteran. This was because she and Richard had practised air-sharing frequently. A much more experienced diver, he is a big chap and Florence is a slight lady. So he consumes air far more quickly than she does and, near the end of their dives together, often turns to her to share her air for a few minutes.

A final note: Richard’s habit of carrying a back-up analogue gauge allowed the pair to continue the dive after taking care of the emergency. Without it, he would have been blind as far as his residual air supply was concerned, and would have had to abort the dive anyway.