Everyone knows that minimising the amount of weight carried is a diver’s holy grail, says SIMON PRIDMORE, but there are practical limits in the quest to down-weight 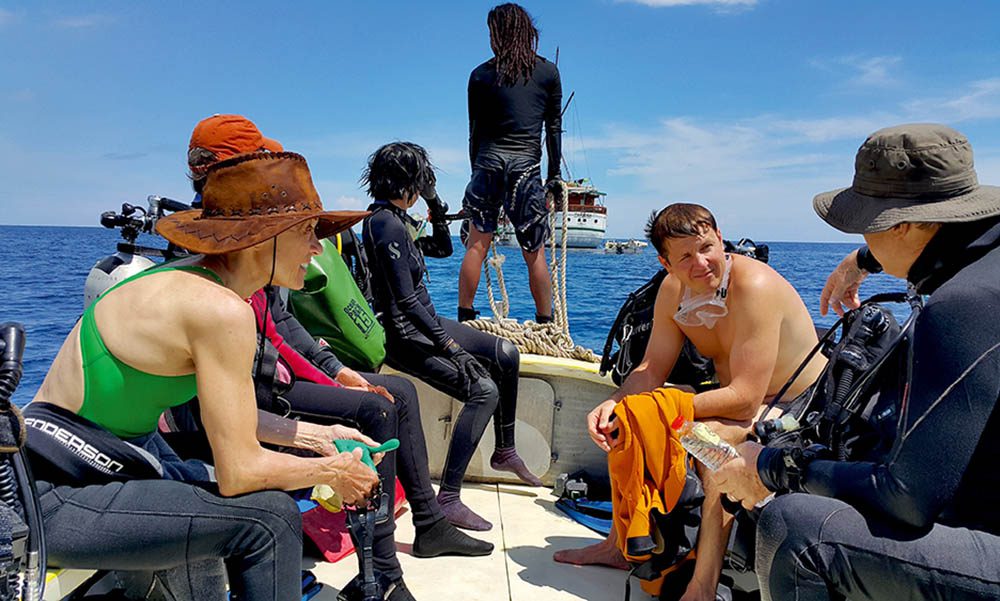 HELGA WAS ON THE eighth day of a long liveaboard trip across Indonesia. The diving had been superb, and she was having fun and feeling relaxed.

She back-rolled into the water, dropped to the seabed at 24m and swam over to a coral head to see what she could find to photograph. The first thing she spotted was a tiny, beautiful, bright red frogfish pretending to be sponge.

“Got you!” she thought. “What a great start to the dive!” She spent a couple of minutes taking pictures from various angles until she was satisfied that she had the right shot, then turned to find her husband, who would normally be hovering close by.

There he was. She flashed him an OK sign but, instead of responding in kind, he pointed at her waist. She looked down, wondering what the problem was and, at first, she could see nothing wrong. Then she saw what he had noticed.

She was not wearing her weightbelt.

Her initial thought was that she should go back up to the tender-boat and retrieve her belt, but then it occurred to her that she was already at 24m.

What would be the point of ascending to get a piece of equipment to help her descend if she was already on the bottom and doing just fine?

She had been wearing 3kg of weight on her belt. This was 1kg more than she usually wore, because she had begun the trip with a new 3mm wetsuit and was aware that, being new, this suit would have more positive buoyancy than her old one, which had been compressed and recompressed during a couple of hundred dives over the years and had consequently become thinner, less able to keep her warm, and less positively buoyant too.

Helga’s husband slipped a 1kg weight off his weightbelt and passed it to her with a shrug, as if to say that was the best he could do. He raised a thumb, asking her if she wanted to abort the dive, but Helga shook her head.

She popped the weight he had given her into a zippered pouch on her harness, and indicated that they should just continue the dive.

This they did. They had a great time, ascended after the prescribed 60 minutes and Helga managed the safety stop without any difficulty at all.

She is a slim, petite woman, always uses less air on a dive than the others in her group and usually surfaces with at least 70 bar in her cylinder.

Back on the tender boat, Helga told the group what had happened. “Well, you’ve obviously been wearing too much weight!” said one person.

“Maybe you don’t actually need any weight at all,” said another, indicating that Helga hadn’t even noticed that she had left her weight-belt behind until her husband had pointed it out.

A third diver began a short speech about how it was always best to wear as little weight as possible, because carrying too much on your belt affected your posture in the water and pushed your legs down. Then, adding air to your BC to compensate for the excess negative buoyancy lifted your head up and made you look like a seahorse.

Also, he added, extra air sloshing around in your BC made it hard to keep your balance, and all that rocking and rolling increased your air consumption.

However, a fourth diver objected; while all that might well be true generally, it certainly didn’t apply in Helga’s case. They had all been diving together for a week and, as far as he could see, even when she had been wearing her weightbelt, Helga’s posture and stability in the water were as good as those of any diver he had seen.

And she always had more air left at the end of a dive than the rest of their group.

These, everyone acknowledged, were all good points. The conversation moved on.

Helga had noticed three things during her almost-weightless dive. The first was that she had not added any air to her BC at all.

The second was that her lower back had started to hurt during the second part of the dive, which was unusual, and the third thing was that she had found it more difficult to stay completely still while she was taking photographs.

She concluded that, after 20 dives in her new suit, she evidently no longer needed to wear more weight to compensate for its newness.

She had managed to do the dive with only the 1kg her husband had lent her, yet she had missed the sensation of being rock-solid and “centred” in the water that she usually felt.

She also guessed that her lower back pain might be associated with her subconsciously arching her spine towards the end of the dive, as her cylinder gradually emptied and became increasingly positively buoyant.

Her conclusion was that, while she had shown that she could accomplish a normal dive using only 1kg of weight, and was even able to descend wearing no weight at all when her cylinder was full, this was not a justification for changing the way she dived.

Yes, the advice that divers should carry less weight on a dive to improve their posture, balance and air consumption was entirely well-placed, but this did not mean that a diver should therefore carry less weight than they needed.