It pays to be a team-player and to be nice to other divers, says SIMON PRIDMORE. Unless, that is, you prefer to be a Brian… 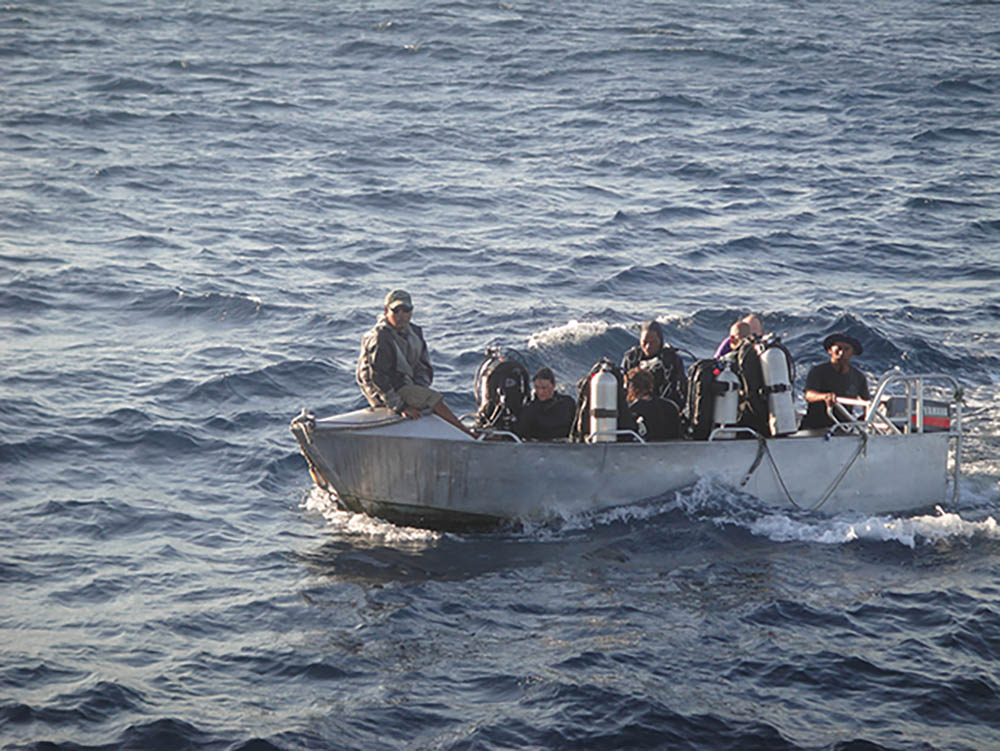 Dive-tender on a grey day – Brian is not pictured.

THIS STORY TAKES PLACE on a dive liveaboard that ran four dives a day and imposed a 60-minute maximum dive-time on each one.

One of the divers, Brian, didn’t like this policy. He didn’t much like the liveaboard’s “dive as a team” strategy either. He would often swim some distance away from the group, complaining afterwards that their bubbles kept getting in his photographs.

Sometimes Brian would swim in completely the opposite direction from the group, on the basis, as he would subsequently explain, that the guide had been taking them all the “wrong” way.

And he simply refused to come up from the dive at the 60-minute time limit. When he did eventually surface, he would boast about how much air he had left.

He tried to cajole others to join him in his one-man protest action but was unsuccessful. They could all see how the 60-minute policy helped the liveaboard fit four dives, travel time between dives, three meals and tank-filling into an all-too-short tropical day.

They pointed out to Brian how his insistence on extending his dive was causing them to fry in the sun on board the tender while they waited for him, but all he did was suggest hats and sunscreen.

The other divers eventually just shrugged their shoulders and nicknamed Brian “the lone wolf”.

The liveaboard crew tried to reason with him but he would just get aggressive, point out that he had paid for his trip so was entitled to dive in whichever way he wished. He threatened that he would give them a bad review if they tried to ban him from diving. They too eventually gave up arguing with him.

After one particular afternoon dive, on a reef wall in relatively rough seas, all the other divers surfaced and were back in the boat before 60 minutes were up, as the conditions had not been very comfortable under water.

Things were not much better on the surface either, with the tender buffeted by the heavy waves.

The lone wolf, as usual, was not with them. Nobody was concerned, because this was normal. Brian would not be denied the diving time he deserved just because the conditions were poor.

At least the sun was not burning down on them. The sky was grey and cloudy, just like the sea.

It was only after they had been rocked and rolled by the swell for almost half an hour that the boat-crew sensed that something might not be well, and that even the lone wolf should have surfaced by now.

They began a search, but they did not find Brian. After a while, they abandoned the effort briefly to return the divers, some of whom had been seasick, to the mother-boat. Then they went back out to search for him again.

The lone wolf had become the boy who cried wolf, and the other divers wondered if they would ever see him again.

After almost two hours, just as darkness was falling, a sharp-eyed crew-member saw what looked like a small orange buoy in the fading light.

As the tender approached, they saw that it was a partially inflated safety sausage and, to their relief, there was a diver attached to it, waving frantically.

Brian was unharmed but looked pale and scared as they helped him into the tender. Of course, by the time they got him back to the liveaboard he had recovered his usual bluster and was furious with the crew and his fellow-divers for losing him in the first place, and then not finding him more quickly.

During the remainder of the trip, however, he did dive much closer to the group, and would surface with them on time, every time.

This sort of scenario is all too common in diving, and stories like this divide opinion. Some might attach blame to the liveaboard crew for not enforcing their policies more strictly. Some might feel that they had their priorities twisted and that, no matter how objectionable Brian was, after having given him a number of warnings, they should have stopped him diving, let him off the boat at the nearest port and refunded the cost of his trip.

After all, he was causing his fellow-divers inconvenience and he was messing up the boat’s schedule. For all his miraculously low air-consumption, he was not diving in what would conventionally be seen as a safe manner.

Stopping him from diving would have meant a safer, more pleasant trip for everyone else on board, simply at the expense of a refund and the risk of a bad review.

Others might agree with Brian. They might agree that he had paid for the trip so should be able to dive any way he liked. “He is obviously a good diver and it’s a free world”, they might say.

One thing is indisputable, however. Brian is not a good diver. An attribute essential to being a good diver is altruism: that is, concern for the well-being of others. This is a quality that all good divers either possess naturally or have learnt through experience.

Whether you like to dive solo, with a buddy or with a group of divers, diving is a team sport. You are part of a team.

Some are under water, some are on the surface, some are back on land, or in this case, the mother-boat.

This concept also extends to the diving world as a whole and to rescue teams who are called out to search for divers when they go missing at sea, in lakes or in caves.

Just as you hope that the people who take you diving have your best interests in mind, so should you, as a sport diver, keep their interests as well as those of your fellow-divers in mind.

You have a responsibility to others in the diving community to keep yourself safe so that they don’t have to put themselves out, or even in harm’s way, to search for you or rescue you.

Many of the most important dive-safety rules, such as “one up, all up” are anchored in this concept.

For the sake of a few more minutes under water, Brian felt that he was quite justified in flouting the dive operation’s rules, ignoring its interests completely in favour of his own, putting the crew under pressure and making his fellow-divers suffer while they waited for him.

Behaviour like this might seem harmless but, as in this case, it can have potentially tragic consequences.

When, at least partly because of his obstinacy, Brian got into difficulty, he was probably quite happy, although would not admit it, that the crew had the attribute of altruism and kept searching for him for as long as they did.