To Victoria Falls & Beyond

To Victoria Falls
& Beyond

This year divers penetrated further than ever before into Mexico’s challenging, mysterious Nacimiento del Rio Uluapan cave system. ADAM HAYDOCK was project manager of the team of nine that made what he describes as one of the most awe-inspiring cave-diving discoveries in decades 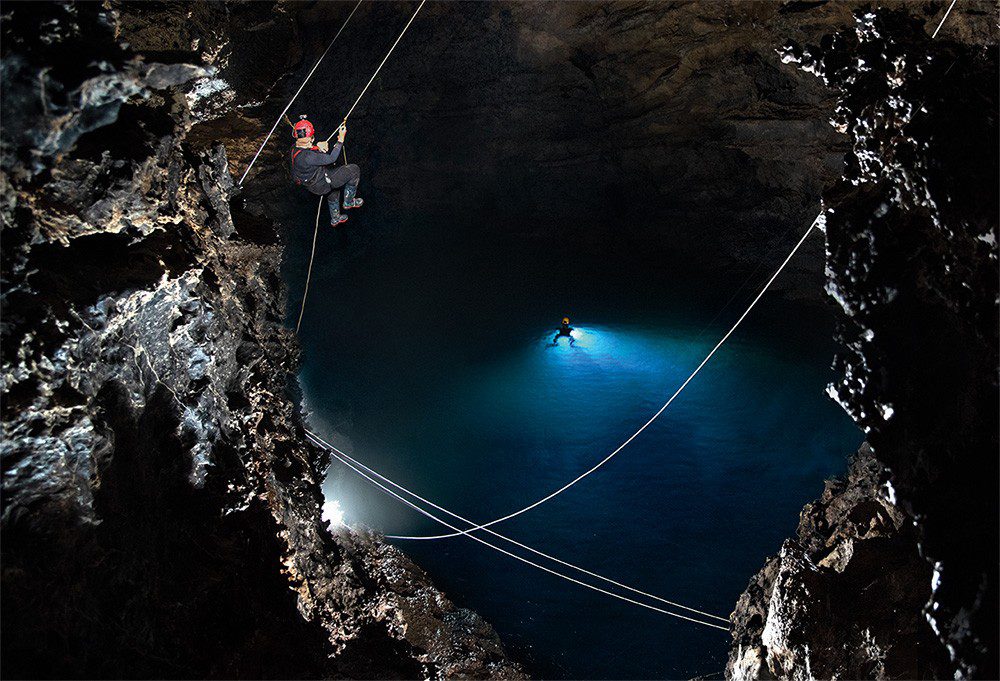 Gilly Elor rappels down the gear-trolley lines as Jon Lillestolen lights up the massive body of water inside the Rio Uluapan.

Arriving at the last tie-off, I tied in a freshly loaded exploration reel and began ascending the wall, suspecting that it might continue at a shallower depth,” Teddy Garlock told us when he and Zeb Lilly got back. “I scootered through a small passage that broke out into some massive virgin cave – again!

“We found the passage making a trend downwards and continued until we ran out of line at a depth of 100m-plus, more than 365m from our previous end-of-line tie off.

“We were now around 1000m from the start of sump two, and our deco obligation was rising fast.

“I tied in a new exploration reel and motioned for Zeb to turn around, beginning his survey while making his way towards the exit.

“Splitting up at 100m meant that I could press on, gaining valuable information about what the sump was doing while Zeb began obtaining the data necessary for the survey.

“I continued down the passage, finding the cave take on a character I hadn’t seen before. The ceiling came down to within 3m of the floor, and the passage narrowed from 23m to about 4m.

“The floor was covered in large-size gravel, and flow was quite noticeable.

“At a depth of 101.4m, I stopped my scooter and began making a placement. I added some diluent to my rebreather and heard an increasingly loud hiss of gas. My MAV [manual add valve] was freeflowing!

“I began disconnecting my diluent, plumbed into the unit with a QC-6 fitting. I was able to stop the addition of gas to my loop quickly, but in those few seconds noticed my breathing rate increasing drastically.

“There was only one option. My dive ended and our team had reached our furthest point of exploration for this expedition.”

for the past four decades, cave-explorers have been seeking to understand what lies beyond the impressive resurgences in Oaxaca Mexico. The Nacimiento Del Rio Uluapan is one such system.

Cave-exploration in the rugged jungle terrain of the Sierra Mazateca has yielded impressive discoveries, including caves reaching more than 1200m deep, roaring waterfalls and the extensive water-filled passages called sumps.

The Cerro Rabon is a limestone plateau in the eastern corner of the Sierra Mazateca. Rising 1600m above sea-level,it has the potential to contain immense cave systems, and among the known entrances is the Rio Uluapan, a massive opening in the canyon wall that reveals the entrance to a room containing a 30 x 50m

Beyond The Sump is a collective of cavers with specialised skills and the ability to live in cave-systems for weeks at a time.

Past projects have explored some of the most difficult systems, including the deepest cave in the western hemisphere, Sistema Huautla.

This April our international team launched an expedition to discover what lay beyond that sump pool. Equipped with gear for deep cave-diving, technical bolt-climbing, underground camping and cartography, the nine of us pushed deep into the heart of the Cerro Rabon – and made what we believe is one of the most awe-inspiring cave-diving discoveries in decades.

In 1985, expedition cavers Bill Stone and Noel Sloan cut a steep trail up to the cave entrance, after negotiating a damaged bridge caused by the intense floodwater leaving the cave.

“The water was frightening,” said Stone. “The water flying out over the entrance travertine dams was deeper than Noel’s height, and arced out a good 20m before disappearing into a cloud of impact-induced spray and fog.”

The two men were able to enter the cave, and found that the water was spread out over the breakdown, creating a calm body of water towards the back.

The next day they carried out a dive using S-Glass composite tanks, Y-valves and modified Sherwood regulators that handled 380 bar. They tied off 280m into the cave, and hit their thirds.

The exploration remained a secret until 1995, when Paul Smith, Bill Farr, Tom Morris and Jim Brown returned to the Uluapan. Brown reached the limit of the previous exploration and Farr carried on to a point 430m from the entrance, where he surfaced into a large air-chamber in the middle of a pool in which the waterfall was found.

After that the Nacimiento Del Rio Uluapan was left as one of Mexico’s great cave diving mysteries.

The first thing you notice as the road descends into the valley is the precipitous Cerro Rabon, rising more than 1000m into the clouds.

By the time I arrived, the waterfall room had already been rediscovered, as Steve Lambert told me: “It was just a coincidence that I happened to be in the right spot and was able to hear traces of a deep resonant sound,” he said. “I quickly dropped a cookie on the line and swam over to Teddy. We swam back and Teddy could also hear the faint rumble.

“At this point we began to get excited. We swam staring at the ceiling of the cave, wondering where the noise could be coming from, as we were surrounded by solid rock in all directions.

“All of a sudden, the solid stone ceiling dropped away and turned to blackness,” said Steve. “We tied off another line and headed up from a depth of 21m. At about 12m we could see waves on the surface. A safety stop was out of the question, and we arrived at the surface in a massive room, thundering with the sound of the waterfall.”

Additionally, Charlie Roberson and co-leader Zeb pushed into sump 2 and found deep continuing passage, with no end in sight! They had to continuously reload their exploration dive-reels, because they kept laying a couple of hundred metres of line with every push-dive.

“Not knowing how far or deep sump 2 would go, we decided to swim using our pumped-up 7-litre tanks for bail-out,” said Charlie. “I was diving my Fathom CCR and Zeb was on his KISS Sidewinder.

“Zeb ran the reel while I bird-dogged out front.” This technique had worked well for us in the deep, clear caves of Florida, and had the advantage of allowing the lead-diver to route-find before the other diver followed with the reel.

“Route-finding wasn’t an issue, and the massive passage turned right and started gradually getting deeper and bigger.”

as i walked into the cave entrance,  I turned to look back out into the hazy, humid Uluapan valley.

A row of stalactites like sharp teeth shrouded with hanging garden vines set a stage of serenity. Birds flew out into the valley below in a symphony of sound and motion.

The Rio Uluapan is more than just a cave for exploration. It’s a water source for the local community, and a sanctuary for life. Inside, we had 60m of boulder-hopping to reach the impressive resurgence pool, which extends back 60m to where the ceiling meets the water.

A big wall-climbing port-a-ledge was set up just beyond the cave entrance at the ceiling for storing equipment. Today was a rest day from the previous day’s exertion, so I stayed at the entrance to photograph the passage.

The following day we headed back up to the cave and prepared to dive into sump 2. I was diving open-circuit steel 85s, while everyone else was on Sidewinder CCRs. Tanks were trans-filled, sorb packed and we prepared to dive to the waterfall room.

This lies 518m from the resurgence, with a 12m average and 21m maximum depth along the way. To speed up travel time through sump 1, I held on to leader Zeb’s crotch-strap through the submerged passage, keeping a low profile to minimise drag. I noted the sculpted walls and sandy rock bottom that Bill Stone had seen.

Visibility was around 10m, revealing some of the biggest underwater passage I had ever seen, although at one point restrictive contouring of the passage meant that I had to let go and swim into a pit before ascending back to Zeb.

We descended back to 20m, the walls disappearing into the blue darkness. It was at this point that a vertical line appeared, heading straight up to the waterfall room.

Surfacing, I could see the lights of Jon Lillestolen and Gilly Elor moving around, and heard the roar of the waterfall.

I had imagined it as larger than its actual 6-9m size. The team had named it Victoria Falls, after the cases of warm Victoria beer they had been drinking.

We attached our dive-gear to a line on a ledge and swam over to the fixed ropes set in place for an easy traverse over to the top of the falls.

Jon had set these traverse lines up to minimise exertion in carrying the gear over to sump 2, and they went from the shoreline to a shelf over the waterfalls.

Another set of ropes continued from this shelf to the top shelf, about 12m higher, and into a very sharp upper passage in which water appeared to flow when levels were high. The trolley continued horizontally to an anchor-point, concluding at sump 2.

We expected them to be in the water for four hours, so headed back to get some photos of the dry portion of the cave.

Before we knew it, we could see Zeb and Teddy lying down on their final decompression stops while reading waterproof romantic novels! After their last 45-minute stop they surfaced, and reported that they had laid another 300m of line, but that the cave continued deeper, with no end in sight.

They reported that sections of the cave ascended to a shallower depth before going back down, which had created a complicated and rather lengthy dive.

After a two-hour surface interval, we passed the gear along the trolley to the top of the waterfall room, then descended to the waterfront. This took some time, but moving the gear over to sump 1 with a trolley system was a lot easier than hauling it through the water passage.

Eventually, we made it back to sump 1 and prepared for our dive back through it.

The team kept pushing deeper into the Uluapan with continuing success until they reached a maximum depth in excess of 100m and a bit more than 2.1km of mapped passage, making the cave 2.5km long. Plans for a return are in motion, with push-divers using dual rebreather systems to go deeper and further than we have ever been before.

The depth and distance covered in the Uluapan hugely surpassed our expectations, and we expect to find something of great significance next year.

My thanks to all the divers mentioned, as well as Andreas Klocker, Susana Alejandra Mendoza and Joe Heinrichs. Find out more at beyondthesump.org and even-further.com