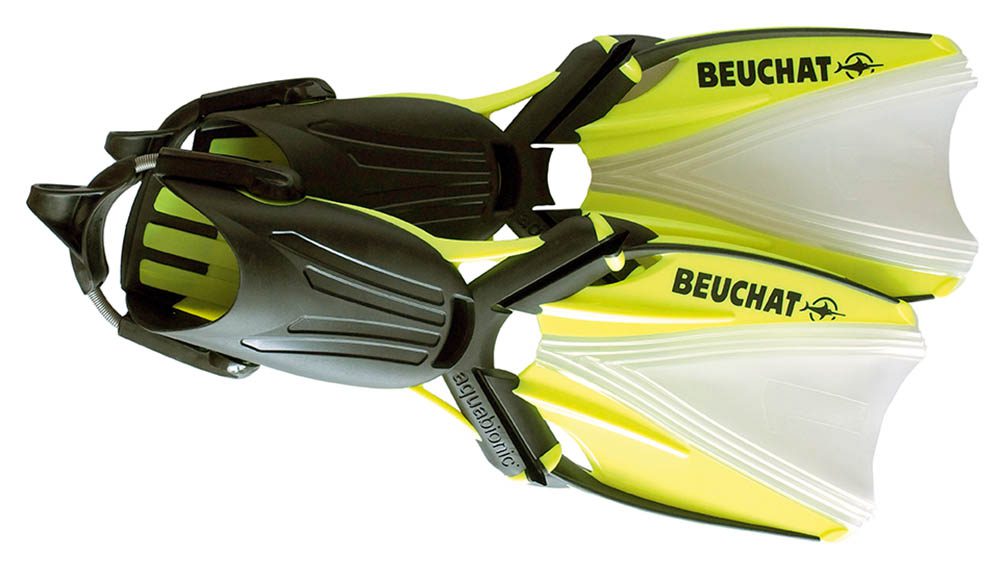 FINS EXIST to translate your muscle power into forward motion as efficiently as possible, but in a marketplace crammed with different styles and designs any new product needs to have immediate impact if it’s to get a second look from prospective purchasers.

Beuchat sent me a pair of its new Aquabionics to try, and these fins certainly stand out.

As soon as I pulled them out of their supplied protective bag I knew that they were the real deal. You know, proper fins that’ll hang off the ends of your legs and give you the driving power of a train, but still look ice-cool and as modern as tomorrow.

It didn’t hurt that Beuchat had sent me a pair in an eye-searing yellow, either. Beauty may be in the eye of the beholder, but I liked ’em. Other colours are available if you’re concerned about looking a bit too bold, but these are not fins for shrinking violets.

The foot-pockets were long and deep enough to accommodate my full drysuit-booted foot and the spring heel-straps pulled up to hold the fins firmly in place. The straps are adjustable over a range of 7cm – just rotate one end of the fin-strap until it’s sticking up at 90° to the fin, push down to unclip and remove the end of the strap from the fin, then screw the endpiece in or out until you get to the right length. It’s quicker and easier to do than to explain.

Seen from above, the foot-pocket curves in and then the fin blade curves out. The moulding uses black polymer, so you see an upright Y-shape with a thick foot, and the branches of the Y form what Beuchat calls a double hinge.

The polymer of the branches is deeply incised top and bottom, so you have a thinner centre section where the blade as a whole can pivot.

The front of the foot-pocket has vents on the bottom and top so that the fins aren’t held to your foot post-dive, and you can avoid all that embarrassing hopping about as you try to get them off your feet.

Further down, the blade becomes a reasonably standard shape but is formed from three grades of polymer. The sides are upright to stop the blades slipping sideways through the water and thereby wasting some of your precious muscle-power.

The outer portions of the blades are of a hard material that can flex and spring back into shape, and the centre-section is a clear and much softer polymer that can form into a channel to scoop water where you want it to go.

Beuchat calls the result Water Adapting Responsive Propulsion technology, or WARP for short, all very Star Trek, and claims that the fins react to both the effort you put into each stroke and the style in which you fin.

Basically, each time you fin the resistance of the water causes the blade to flex down and form a scoop, holding a volume of water that is forced to the rear as the blade returns to its original form. The shape of the fins ensures that the water is always pushed backwards and isn’t allowed to spill uselessly out of the side.

Beuchat also says that the design makes the fins equally effective whether used with the BSAC-approved swing-from-the-hips scissor-kick, a frog-kick or even when back-finning.

It even goes so far as to claim that the Aquabionics are the most efficient fins in the world, and suggests that they’ll reduce your gas consumption while providing day-long comfort.

And how does the hyperbole compare to the real world?

Pretty well, actually. I don’t know if these really are the best or most efficient fins in the world, but they’re darn good in the water.

Putting them on was easy, and the big finger-tabs made the straps easy to seat and remove. Even in a midwinter quarry your numb fingers should be OK here.

Striding confidently into the water, I quickly discovered that the fins’ weight was nicely judged for horizontal trim in a drysuit.

Then, using the leg-waggling action that I like to call a frog-kick, I found that they pushed me, my drysuit, rebreather and a pair of bail-outs through the water very nicely, thank you.

When I switched to the full-on, big-licks scissor-kick I was covering a surprising amount of distance in not very long at all. They even worked when I did the ankle-waggling mini-kicks that I use when not disturbing the vis is more important than making rapid progress.

Finally, back-finning and helicopter turns, and the Aquabionics got the job done there as well.

As far as downsides go, I don't have much to report. The tab at the back of the strap is a solid, hard block that rubbed the back of my heels a bit toward the end of a long dive, and that’s it.

I’ve given the Aquabionic fins a cautious nine stars, but next time we do a proper side-by-side comparison test I wouldn’t be surprised if they were at the top of the heap – in which case I’d revise it up to the full 10.

COLOUR> All black, blue and black, black with pink, red or yellow