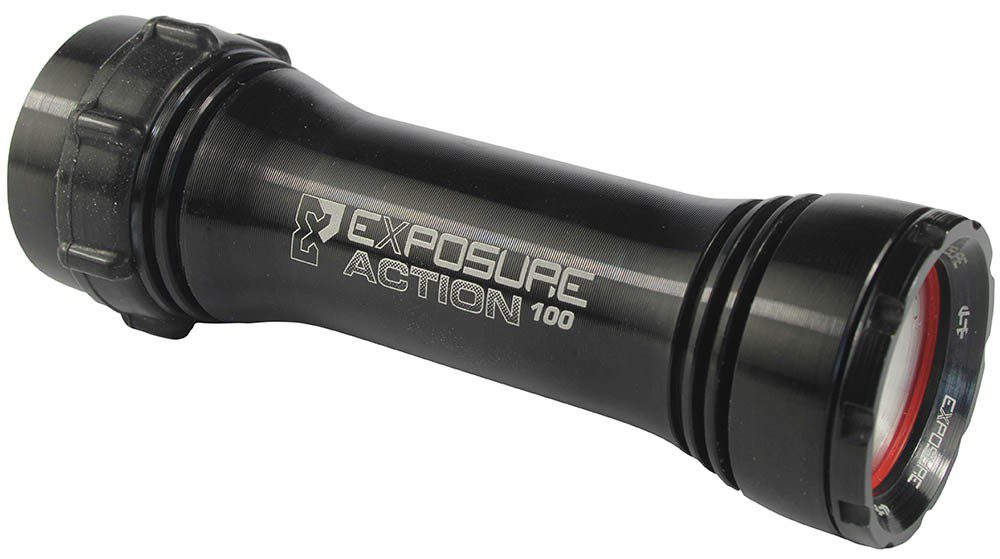 O-rings: Have you ever stopped to think how much diving equipment relies on them?

The valves in your drysuit and BC, your regulator set, your torch – most pieces of kit you take under water rely on those little round beggars for proper operation.

And if it’s something you need to take apart and put back together fairly frequently, well, O-rings are the sealing widget of choice – just ask any underwater photographer. Look around any dive-deck and you’ll be struck by how much O-ring greasing is going on – and that means that to be sent a pair of video lights without an O-ring in sight is just wonderful.

My own somewhat downmarket video lights have an end-cap that you screw off to extract a fairly hefty 18650 battery for recharging, after which you screw the cap back on and rely on a pair of O-rings to provide a watertight seal.

So far so good, and they’re rated to 80m, but sooner or later…

Not so Exposure Lights’ Action 1-100 video lights, which probably do have internal O-rings, but nothing that a ham-fisted diver like me can mess up, because in use they’re sealed away from harm.

Each nicely made lamp chucks out 1000 lumens of light in an even 100° beam from a unit measuring 101mm in length with a maximum diameter of 35mm and weighing just a gnat’s wossnames over 100g. This means that they’re small, powerful(ish) and light.

The lights are sold singly and come in a fitted case. To charge, you find yourself a USB charger (not supplied, use the one from your phone), into which you plug one end of the supplied charging cable and then place the shaped plug on the other end over two small, round, gold-coloured bumps at one end of the lamp, where it’s held in place by a magnet between the gold bumps.

No O-rings, see? A full charge from dead as a dodo takes around three hours.

Ignore the see-through plastic panel covering the charging end of the light and through which you can see some of the circuitry. There isn”t a cover or cap, it’s all sealed and it won’t leak, even if it looks as if it will. The lamps are rated to 100m, and though I didn’t take them quite that deep I’d be happy to do so.

The lamphead is at the other end of the unit, and to turn on, turn off or adjust the power output between High, Medium and Low, you press the slightly larger silver button opposite the charging bumps. The button is big enough to operate with thick gloves, but small enough not to press by accident.

Exposure claims 1.5 hours’ runtime at full power, 3hr at medium and 6hr low. I found a full hour-long night dive was easily completed on full power, and later bucket tests suggested that Exposure Light’s claims were if anything a touch conservative.

In case you’re a bit butter-fingered, there’s a removable ribbed rubber collar at each end of the lamp to protect against the odd knock.

Let’s start with the powerful(ish) thing.

A thousand lumens sounds like a lot, and if you shine it in your eyes it is, but compared to the noonday sun it isn’t. A thousand lumens deployed in less than 5m of tropical waters between 10am and 4pm won’t do much to help your video footage.

But, and it’s a significant but, used deeper than a few metres or where there’s even a little shade, these lights work very nicely.

If, for instance, you ever dive the wreck of the Kingston at Shag Rock in the Red Sea, and I encourage you to do so if you haven’t, there’s a bit between decks that normally teems with glassfish, and which the Action 1-100 lamps lit up a treat, making the fish glitter and flash as they swirled and shoaled. And where they live isn’t at all dark.

Deeper and at night these lights were even better, and in British waters they did an excellent job. It’s one of those ironies of underwater video that the darker it is the less oomph you need from your lights, within limits, and the Exposure Action 1-100s perform well above those limits.

Far more important is the wide, even beam. One lamp very nearly covers the field of view of a 170° action camera out of the water, and once under water the caveat can be removed. 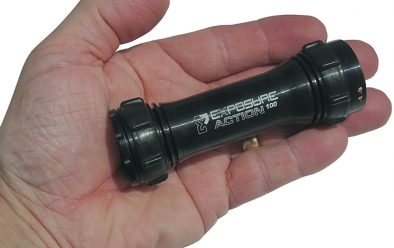 Buying one lamp and adding a second later is a viable strategy for the impecunious.

My light-meter measured around a stop of fall-off in light intensity between centre and edge of the beam. That sounds a lot, but unless you intend to shoot much video of white-painted walls it isn’t noticeable in real life, especially under water.

The verdict is a very strong nine out of ten.

The Exposure Action 1-100s do what they’re supposed to do, look and feel solid and well-made and represent decent value for money.

Their size and weight make them particularly appealing as the lights for an action-camera set-up, but they wouldn’t be out of place in the kit of any travelling diver.